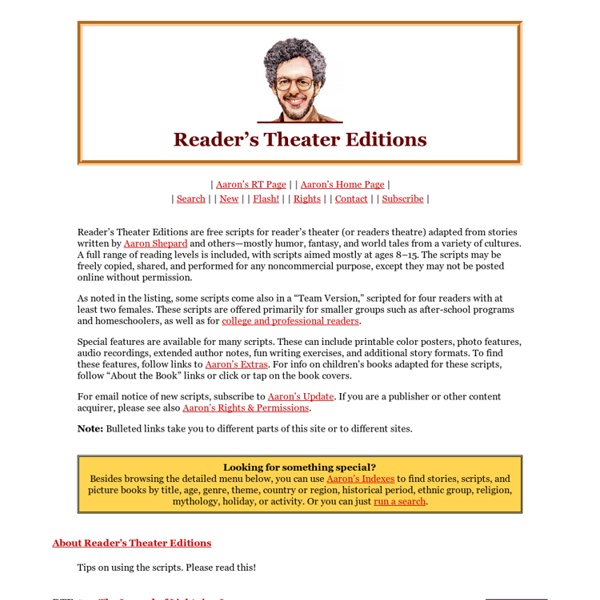 Reader’s Theater Editions are free scripts for reader’s theater (or readers theatre) adapted from stories written by Aaron Shepard and others—mostly humor, fantasy, and world tales from a variety of cultures. A full range of reading levels is included, with scripts aimed mostly at ages 8–15. The scripts may be freely copied, shared, and performed for any noncommercial purpose, except they may not be posted online without permission. As noted in the listing, some scripts come also in a “Team Version,” scripted for four readers with at least two females. These scripts are offered primarily for smaller groups such as after-school programs and homeschoolers, as well as for college and professional readers. Special features are available for many scripts.

Using plays in the language class Here are some suggestions and guidance on how to get the best from your students. Using plays with language learners can Improve their reading and speaking skillsEncourage creativityHelp them experiment with language -tone of voice, body language and their own lines if they are involved in writing the play.Bring them out of themselves -some students like performing or find the script gives them confidenceInvolve the whole class – non speaking parts can be given to learners who do not wish to speak or are less confident. Technical parts of a production can give others a role: sound effects, making scenery, being in charge of lights, props or prompting their classmates from the “wings”. Plays suitable for language learners

surprisepoem It happens all too often that I hear the fateful call and learn that Sam is waiting for a game of tetherball. I know I shouldn't do it. I should turn and walk away. But something deep inside me says today's my lucky day. I stroll across the playground. Reader's Theater How to Use Readers Theater Scripts Reader's Theater Scripts can be original scripts or scripts based on leveled books. Use the original scripts or the scripts that accompany a single leveled book when teaching a group of readers at the same reading level. Use the multilevel scripts, which contain parts at three different reading levels to match its partner multilevel book set, when you want a single reader's theater script for a group of varying ability. Make the performance as simple or elaborate as you wish. Keep in mind that the most important purpose of reader's theater is to teach and practice fluent reading of printed text.

Free Printable Children's Theatre Scripts, Skits, and Plays Performing in your own play is a great activity for friends and family. Not only is it really fun, but it can encourage your children to read, urge them to develop an interest in arts and culture, and help develop a general thirst for knowledge. These websites offer a huge variety of printable plays and skits for children of all ages, lighthearted to serious, from small to large cast, and includes scripts from several well known stories and folk tales.Readers Theatre Editions -[ you can find forty, free, individual scripts to print out and use. I like this site because he provides a lot of the necessary information; such as age groups, reader skills, length, culture, genre, and casting number. Kidsinco [ Now, this one of the absolute best for finding plays and scripts suited to younger children. A lot of popular stories, including Snow White and Pinocchio; easy and short, and for small or large groups.

quite silly Ask someone born before 1959 what Rowan and Martin's Laugh-In was. Slit a refrigerator box down one corner so you can open it up and make a \__.__/ shaped wall. Duct tape it to the floor so it doesn't tip. Cut windows with flaps so they can open and close setting the height and location carefully planning where each actor will sit, kneel or stand to look out the opening and not be standing on someone else. Paint wild hippie decorations on the wall. The actors pop their heads through the windows to ask riddles, knock-knock jokes, or short jokes.

Reader's Theater Scripts and Plays for the Classroom Reader's Theater Scripts and Plays Readers Theater is a dramatic presentation of a written work in a script form. Readers read from a "script" and reading parts are divided among the readers. No memorization, costumes, blocking, or special lighting is needed. How to Get Students to Talk in Class Decentralize Get them talking to each other, not just to you. Literally tell them to address their comments to each other. Try not to respond to every student comment; instead ask the class what they think about what has just been said.

Comedy Skit Scripts Jeff’s Original Comedy Scripts ROYALTY FREE – FREE SCRIPTS – Sketch Comedy Once upon a time, I wrote a small, no sets required, sketch comedy show called TRANSLUCENT COMEDY, by the Opaque players. I offer the scripts here to read, and/or play and perform. 10 More Moral Dilemmas Morality is fun to debate. At the end of last December, I posted a list of another 10 dilemmas. By the comments submitted, I realize many did not feel that they had sufficient debatable merit. Therefore, I have posted 10 more, which I think will be more thought provoking and agonizing than my first list. Please tell us what you would do in each scenario via comments. Doctor’s Sick Patients

A reader's theater improves student expressiveness. This is a free wbsite offering scripts for ages 8-15. by tiffanygalanis Nov 5