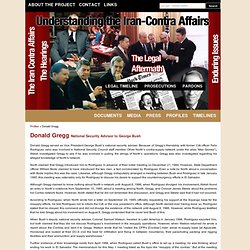 Because of Gregg’s friendship with former CIA officer Felix Rodriguez (who was involved in National Security Council staff member Oliver North’s contra-supply network under the alias “Max Gomez”), Walsh investigated Gregg to see if he was involved in pulling the strings of North’s operations. Gregg was also investigated regarding his alleged knowledge of North's network. North claimed that Gregg introduced him to Rodriguez in advance of their initial meeting on December 21, 1984.

However, State Department official William Bode claimed to have introduced the two men, a fact corroborated by Rodriguez. George Bush Sr. on Homeland Security. Criticized journalists who identified CIA agents Valerie Plame, the CIA undercover agent had her cover blown--and her career ruined--in order to get back at her husband, diplomat Joseph Wilson, who questioned George Jr.'s reasons for going to war against Iraq. 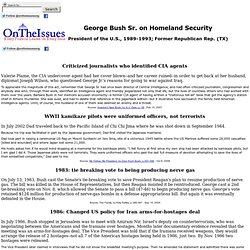 To appreciate the magnitude of this act, remember that George Sr. had once been director of Central Intelligence, and had often criticized journalism, congressmen and anybody else who, through their work, identified an intelligence agent and thereby jeopardized not only that life, but the lives of countless others who had worked with them over the years. New report suggests Israel linked to Irangate scandal. New revelations published on 25th anniversary of Iran-Contra affair say Israel played secondary part in the scandal which rocked DC in 1986. 'Washing the transaction through Israel wouldn't make it legal,' President Reagan was told WASHINGTON – New documents regarding the Iran–Contra affair revealed a possible Israeli link to the political scandal that rocked Washington in 1986. 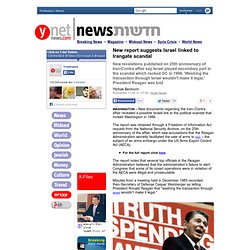 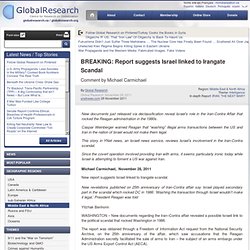 Caspar Weinberger warned Reagan that “washing” illegal arms transactions between the US and Iran in the nation of Israel would not make them legal. This story in YNet news, an Israeli news service, reviews Israel’s involvement in the Iran-Contra scandal. Since the covert operation involved providing Iran with arms, it seems particularly ironic today while Israel is attempting to foment a US war against Iran. Michael Carmichael, November 28, 2011. Bush Says He Lacked Details of Arms-for-Hostages Plan at Critical Meeting in Israel. By GERALD M. 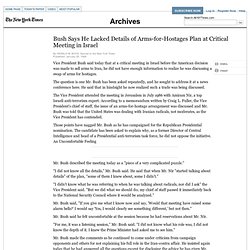 Félix Rodríguez (soldier) Félix Ismael Rodríguez Mendigutia (born 31 May 1941) is a former Central Intelligence Agency officer known for his involvement in the Bay of Pigs Invasion, in the interrogation and execution of Marxist guerilla Che Guevara and his ties to George H. 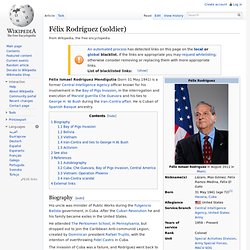 W. Bush during the Iran–Contra affair. He is Cuban of Spanish Basque ancestry. His uncle was minister of Public Works during the Fulgencio Batista government, in Cuba. After the Cuban Revolution he and his family became exiles in the United States. He attended The Perkiomen School, in Pennsylvania, but dropped out to join the Caribbean Anti-communist Legion, created by Dominican president Rafael Trujillo, with the intention of overthrowing Fidel Castro in Cuba.

The invasion of Cuba was a failure, and Rodríguez went back to Perkiomen. In September, 1960 he joined a group of Cuban exiles in Guatemala, supported by the CIA, to receive military training. He was a Paramilitary Operations Officer from Special Activities Division. Donald Gregg. Donald Phinney Gregg (born 5 December 1927) is a retired American politician, CIA employee, and U.S. 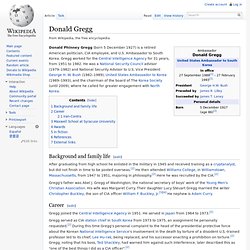 Ambassador to South Korea. Gregg worked for the Central Intelligence Agency for 31 years, from 1951 to 1982. He was a National Security Council advisor (1979–1982) and National Security Advisor to U.S. Vice President George H. W. Background and family life[edit] Walsh Iran / Contra Report - Chapter 29 Donald P. Gregg. Walsh Iran / Contra Report - Chapter 28 George Bush. Wikipedia: Tower Commission. The Commission's report, published on 26 February 1987, concluded that CIA Director William Casey, who supported the Iran-Contra arrangement, should have taken over the operation and made the President aware of the risks and notified Congress as legally required.[3] The Commission's work was continued by the Congressional Committees Investigating The Iran-Contra Affair, which were formed in January 1987 and published a report in November 1987; and by Independent Counsel Lawrence Walsh, appointed 1 December 1986 and publishing a final report in 1993. 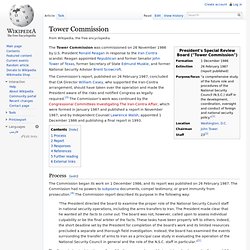 Process[edit] The Commission began its work on 1 December 1986, and its report was published on 26 February 1987. The Commission had no powers to subpoena documents, compel testimony, or grant immunity from prosecution.[4] The Commission report described its purpose in the following way: Report[edit] The commission's report "held Reagan accountable for a lax managerial style and aloofness from policy detail Responses[edit] References[edit] Killian documents controversy. Charles Johnson's animated GIF image comparing what CBS claimed to be a 1973-era typewritten memo with a proportional-spaced 2004-era Microsoft Word document made with default settings The Killian documents controversy (also referred to as Memogate, Rathergate or Rathergate[1]) involved six purported documents critical of President George W. 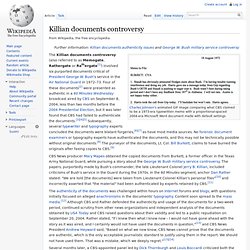 Bush's service in the Air National Guard in 1972–73. Four of these documents[2] were presented as authentic in a 60 Minutes Wednesday broadcast aired by CBS on September 8, 2004, less than two months before the 2004 Presidential Election, but it was later found that CBS had failed to authenticate the documents.[3][4][5] Subsequently, several typewriter and typography experts concluded the documents were blatant forgeries,[6][7] as have most media sources. No forensic document examiners or typography experts have authenticated the documents, and this may not be technically possible without original documents.[8] The purveyor of the documents, Lt. 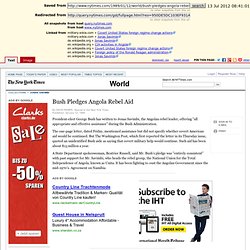 The one-page letter, dated Friday, mentioned assistance but did not specify whether covert American aid would be continued. But The Washington Post, which first reported the letter in its Thursday issue, quoted an unidentified Bush aide as saying that covert military help would continue. Such aid has been about $15 million a year. A State Department spokeswoman, Beatrice Russell, said Mr. Bush's pledge was ''entirely consistent'' with past support for Mr. Mr. He said, ''Unita is to be congratulated for its courageous demonstration over more than a decade that solutions to Angola's problems cannot be found through repressive military force.''