"Outside of a dog, a book is a man's best friend. Inside a dog, it's too dark to read." - Groucho Marx 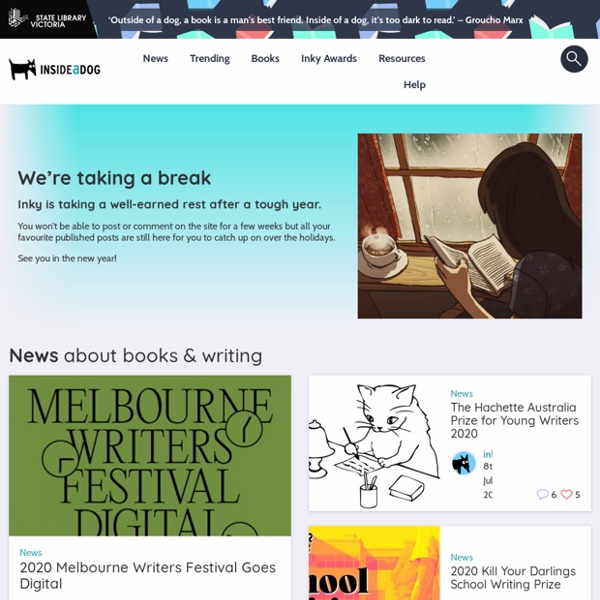 Spring into Action! - Reading Australia To make your 2017 teaching year the most organised, stress-free and fulfilling year yet we have done the hard work for you. Below you will find lists of resources curated around key dates, themes and year levels. We’ve even created lists to help you target cross-curriculum priorities. Plus you get a sneak-peek into future resources, so you can be fully prepared for the months to come. Click on a book cover to be taken to a full teacher resource designed to make your time in the classroom – and out of it – as valuable as possible.

Underrated books: Overlooked fiction, nonfiction, and comics of 2014. Illustration by Jen Wang Slate’s Best Books of 2014 coverage: Monday: Slate staff picks. Tuesday: The best lines of 2014. Wednesday: Overlooked books of 2014. Thursday: The Slate Book Review Top 10.Friday: Dan Kois’ favorite books of the year. 20 Books to Read If You Loved Watching Wonder Woman With Wonder Woman still dominating theaters, maybe you’ve gone back to watch the run across No Man’s Land. Maybe you’re figuring out how to get to Themyscira, or slipping your formal sword down the back of your ball gown, or doing backflips off your couch. So I’ve assembled 20 book recommendations for fans like you. They’re organized into handy categories inspired by Wonder Woman: superheroines, the supernatural, amazing women of World Wars I and II*, badass spies, and shopping/training montages. Because badassery doesn’t end at the theater.

BOOK RIOT We’re Different Book Riot is dedicated to the idea that writing about books and reading should be just as diverse as books and readers are. So sometimes we are serious and sometimes silly. Some of our writers are pros. What happens when you finish reading a book Have you ever felt like having a terrible hangover when you’ve finished reading the last sentence of the book? Probably yes, and probably several times, right. The team from Epic Reads, an online community of young adult fiction fans, has prepared a video that, well, visualizes the damage done to you when “the words stop”. The best cure? Reach for the next book. And the next, and the next…

World of Westfahl Reference: Series Fiction Today, to say the least, there exists no clear consensus as to how to define the genre of series fiction: one study of the subject may focus on texts which are entirely ignored in other studies, while authors of reference entries on the subject may announce, in the calm tones of an authority proffering settled wisdom, definitions of series fiction which are totally at odds with the definitions of series fiction presented in other references. Only two assertions, it seems, cannot be challenged. First, there are some bodies of works displaying certain specific features which absolutely must be regarded as series fiction, since no alternative characterization is possible; such works cannot be reasonably described as trilogies or tetralogies, or as a single text followed by several sequels, or as a number of novels that happen to share the same characters and settings.

New website CharacTour is an expansive database for fictional characters - Boing Boing We’ve all been there a million times: Flicking through Netflix or Amazon or Hulu with no idea what to commit to watching. Nothing immediately grabs your interest and the plot descriptions aren’t selling any of them. Thankfully a newly-launched site called CharacTour offers a new way to think about movies, TV shows, books, and video games: Through their characters. I got a chance to contribute to the site so admittedly I might be a tad biased. But it's a fun place to spend an afternoon and a potentially invaluable tool for actually deciding what to watch. Basically CharacTour is an expansive online database for fictional characters. Australian LGBTQ YA auslgbtqya: Clancy of the Undertow by Christopher Currie(2015)From the Publisher:In a dead-end town like Barwen a girl only to be a little different to feel like a freak. And Clancy, a typical sixteen-year-old misfit with a moderately dysfunctional family, a genuine interest in Nature Club and a major crush on the local hot girl, is packing a capital F.As the summer begins, Clancy’s dad is involved in a road smash that kills two local teenagers. While the family is dealing with the reaction of a hostile town, Clancy meets someone who could possibly—at last—become a friend. Not only that, the unattainable Sasha starts to show what may be a romantic interest.In short, this is the summer when Clancy has to figure out who the hell she is.Goodreads Now that I’ve read it…

Bildungsroman - Booklist: Tough Issues for Teens One afternoon in the bookstore, a young woman in her late teens approached me and said, "Excuse me. Can you help me? I want some books like . . . " She named a few teen fiction titles that dealt with drug abuse and anorexia. She looked slightly uncomfortable but mostly excited. I told her that I could recommend many good books. 25 Classic YA Books Every Woman Should Read At Least Once Before YA had the massive crossover appeal that it does now, many of us likely missed out on a ton of great classic reads—from obsession-worthy contemporary to must-read fantasy—either because we were too young when they were released or "too old" to believe that books about teenagers would appeal to us. Plus, YA wasn't even considered a category until recently, so books could so easily slip by unnoticed. But there are countless incredible YA novels out there, both those that make their ways on to every list of must-read books and more modern picks that are destined to become classics.

How to Build a Culture of Reading Posted by Jessica Keigan on Tuesday, 09/01/2015 Building a school culture is an overwhelming but important task. In 2009, my collaborative team and I read Readicide: How Schools are Killing the Reading and What You Can Do About It by Kelly Gallagher. This fabulous book discusses how schools have inadvertently killed the love of reading. Graphic Novels in the Classroom: A Teacher Roundtable The links in this post are Amazon Affiliate links. If you click these and make a purchase from Amazon, Cult of Pedagogy will receive a small commission at no extra cost to you. Thanks for your support! About a month ago, I shared an Edudemic post on my Facebook page about teaching with graphic novels, and I was startled by how many teachers responded to it. They talked about their own successful practices with graphic novels, shared how the books had transformed reluctant readers into obsessive readers, and they recommended dozens of titles—I’d never heard of most of them, but as soon as I took a look inside each one, I wanted to get my hands on them immediately.