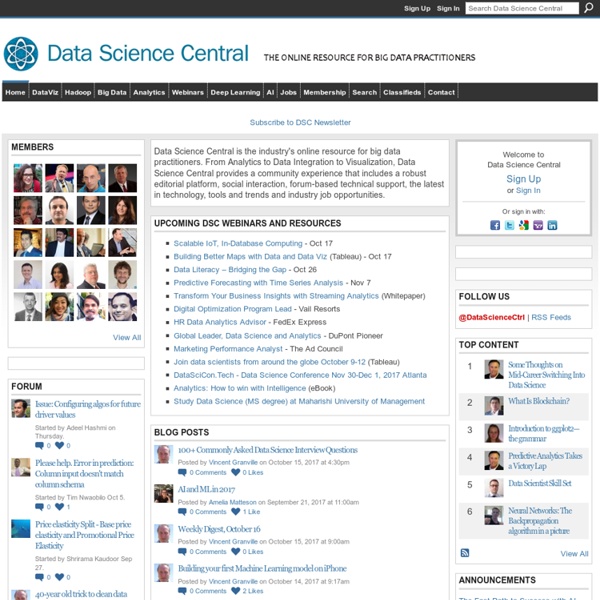 A Practical Intro to Data Science — Zipfian Academy - Data Science Bootcamp Are you a interested in taking a course with us? Learn more on our programs page or contact us. There are plenty of articles and discussions on the web about what data science is, what qualities define a data scientist, how to nurture them, and how you should position yourself to be a competitive applicant. There are far fewer resources out there about the steps to take in order to obtain the skills necessary to practice this elusive discipline. Brains of Introverts Reveal Why They Prefer Being Alone Human faces may hold more meaning for socially outgoing individuals than for their more introverted counterparts, a new study suggests. The results show the brains of extroverts pay more attention to human faces than do introverts. In fact, introverts' brains didn't seem to distinguish between inanimate objects and human faces.

What is data science? We’ve all heard it: according to Hal Varian, statistics is the next sexy job. Five years ago, in What is Web 2.0, Tim O’Reilly said that “data is the next Intel Inside.” But what does that statement mean? Why do we suddenly care about statistics and about data? In this post, I examine the many sides of data science — the technologies, the companies and the unique skill sets. Big data, like Soylent Green, is made of people Karen Gregory | City College Ghost in the Machine Response to Frank Pasquale given at Triple Canopy November 1, 2014 Discussions of automation have, of late, seemed to bifurcate along two lines. The first line suggests that we, the puny humans, are doomed.

The One-Stop Shop for Big Data Today, I’m going to explain in plain English the top 10 most influential data mining algorithms as voted on by 3 separate panels in this survey paper. Once you know what they are, how they work, what they do and where you can find them, my hope is you’ll have this blog post as a springboard to learn even more about data mining. What are we waiting for? Let’s get started! Here are the algorithms: 1.

Institute for Advanced Analytics The Data Science Lab (or “DataLab”) is the research arm of the Institute for Advanced Analytics. It brings together investigators from various disciplines to focus on the intersection of analytical and computational challenges organizations face in extracting meaningful insights from a vast quantity and variety of data. Areas of Interest The detection of anomalous patterns or rare events within and across various realms of data, and determining whether such patterns are meaningful outliers or artifacts. This might include such varied activities as detecting fraudulent financial transactions or cheating in massive multiplayer online games.The detection of commonalities in behavior or sentiment in the analysis of text on the Web or other content systems. Collaborators

Big data Visualization of daily Wikipedia edits created by IBM. At multiple terabytes in size, the text and images of Wikipedia are an example of big data. Growth of and Digitization of Global Information Storage Capacity Source Big data is a broad term for data sets so large or complex that traditional data processing applications are inadequate. What is a Data Scientist? – Bringing big data to the enterprise About data scientists Rising alongside the relatively new technology of big data is the new job title data scientist. While not tied exclusively to big data projects, the data scientist role does complement them because of the increased breadth and depth of data being examined, as compared to traditional roles.

Random forest The selection of a random subset of features is an example of the random subspace method, which, in Ho's formulation, is a way to implement classification proposed by Eugene Kleinberg.[6] History[edit] The early development of random forests was influenced by the work of Amit and Geman[5] which introduced the idea of searching over a random subset of the available decisions when splitting a node, in the context of growing a single tree. The idea of random subspace selection from Ho[4] was also influential in the design of random forests. In this method a forest of trees is grown, and variation among the trees is introduced by projecting the training data into a randomly chosen subspace before fitting each tree. Finally, the idea of randomized node optimization, where the decision at each node is selected by a randomized procedure, rather than a deterministic optimization was first introduced by Dietterich.[7]

Setting up a Data Science Laboratory There is no better way of understanding new data processing, retrieval, analysis or visualising techniques than actually trying things out. In order to do this, it is best to use a server that acts as data science lab, with all the basic tools and sample data in place. Buck Woody discusses his system, and the configuration he chose. I'm going to be describing how to set up a Data Science Laboratory system that you would be able to use in order to compare, study and experiment with various data storage, processing, retrieval, analysis and visualization methodologies. I apologize for the use of the controversial term ‘Data Science' but it captures the meaning.