Top 10 2019 Business Intelligence Trends. Privacy Advocates Are Criticizing Google Sidewalk Labs. Micah Lasher, the head of policy and communications at Sidewalk Labs, told me that Cavoukian’s demands were unrealistic. “The kind of certainty Dr. Cavoukian was seeking at this stage in the process could only be achieved if Sidewalk Labs presumed that it could have authority over all private-sector entities that may come to operate in Quayside,” he said. He added that Cavoukian’s exit was “unexpected,” and that the company has received enormous amounts of positive feedback on the data-trust proposal. Lasher also told me that Sidewalk agrees with the importance of scrubbing personal info. “We’re not going to gather up all Torontonians’ data and sell it, we’re not building Sensorville,” he told The Atlantic in February.

How Sidewalk Labs and Waterfront Toronto square their plan for “ubiquitous sensing” with a simultaneous goal of avoiding “Sensorville” remains to be seen. Read: Google’s guinea-pig city We want to hear what you think about this article. Coming of Age Digitally. About the Authors: Gerald C. 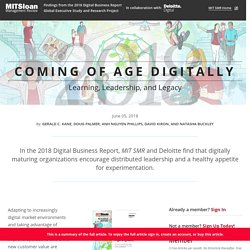 Kane is the MIT Sloan Management Review guest editor for the Digital Business Initiative and a professor of information systems at the Carroll School of Management at Boston College. Doug Palmer is a principal in the Digital Business and Strategy practice of Deloitte Digital. Anh Nguyen Phillips is a senior manager within Deloitte Services LP, where she leads research on digital transformation and other strategic initiatives.

David Kiron is the executive editor of MIT Sloan Management Review, which brings ideas from the world of thinkers to the executives and managers who use them. Natasha Buckley is a senior manager within Deloitte Services LP, where she researches emerging topics in the business technology market. Contributors. GDPR — Quartz Obsession. GDPR scrambling has spawned a swell of data protection 'charlatans'  The Power of Data Insights - Big Data as the Fuel and Analytics as th… The Smart Way to Deal With Messy Data. The processing required to prepare unstructured data for analysis can be cumbersome and prone to error. 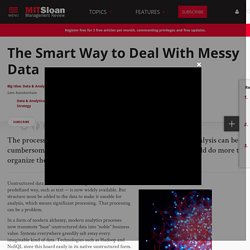 That’s why companies should do more to organize their data before it is ever collected. Unstructured data — data that is not organized in a predefined way, such as text — is now widely available. But structure must be added to the data to make it useable for analysis, which means significant processing. That processing can be a problem. In a form of modern alchemy, modern analytics processes now transmute “base” unstructured data into “noble” business value.

Unfortunately, while these processing steps are impressive, they are far from free or free from error. We all know how each step in a process mangles information. By analogy, organizations are playing a giant game of telephone with data, and unstructured data makes the game far more difficult. Within organizations, each processing step can be expensive to develop and maintain. Becoming a Data-Driven Organization. Data-Driven City Management. Chapter 3 Spotlight: Selection of Key Smart City Participants While no single organization or person coordinates all of the distinct efforts to improve the integration of information technology with Amsterdam’s city services, the city is well-placed to determine which of the many ASC pilots should be expanded. 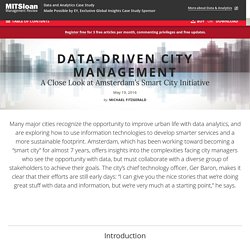 The following sections spotlight key city managers, a smart city project, a founding member of the ASC platform, and the AMS Institute. City Managers Spotlight Baron became Amsterdam’s chief technology officer in March 2014, almost despite himself. Instead, Amsterdam offered him the job. One thing Baron knew perhaps better than anyone were the headaches cities face when trying to be smarter. Once Baron took over as Amsterdam’s first chief technology officer, he launched a data inventory. He also knew that the various companies involved in creating smart cities didn’t really understand cities. Trouble Comes to Light. Automating big-data analysis. Last year, MIT researchers presented a system that automated a crucial step in big-data analysis: the selection of a “feature set,” or aspects of the data that are useful for making predictions. 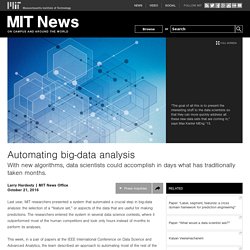 The researchers entered the system in several data science contests, where it outperformed most of the human competitors and took only hours instead of months to perform its analyses. This week, in a pair of papers at the IEEE International Conference on Data Science and Advanced Analytics, the team described an approach to automating most of the rest of the process of big-data analysis — the preparation of the data for analysis and even the specification of problems that the analysis might be able to solve. Lessons from Becoming a Data-Driven Organization. Chapter 1. 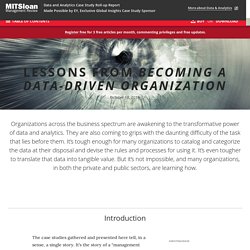 Key Performance Indicators (KPI) Examples, Dashboard & Reporting. The Reason So Many Analytics Efforts Fall Short. Given the role analytics has played in reshaping industries and rewarding innovative adopters over the last two decades, it is surprising how frequently we are asked: “Does this analytics stuff really work?” 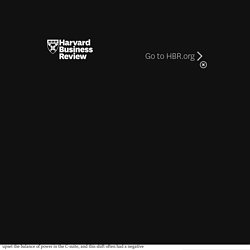 More often than not, the reason for the skepticism is prior efforts that did not produce the expected competitive advantage. Such skepticism led us to study the impact that analytics has had on our clients over the last 20 years. Our surprising finding: Efforts to adopt analytics upset the balance of power in the C-suite, and this shift often had a negative impact on analytics initiatives. Given the myriad other factors buffeting companies at any given time, the design of our assessment was intentionally simple. BigDataPhile — Big Data & Analytics News. Data. Welcome back. 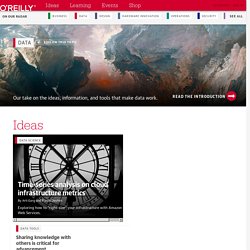 Size doesn’t matter in Big Data, it’s what you ask of it that counts. Big Data is changing the way we do science today. 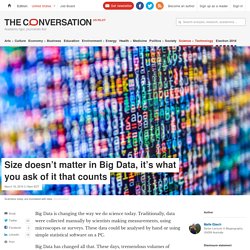 Traditionally, data were collected manually by scientists making measurements, using microscopes or surveys. These data could be analysed by hand or using simple statistical software on a PC. Big Data has changed all that. These days, tremendous volumes of information are being generated and collected through new technologies, be they large telescope arrays, DNA sequencers or Facebook. Variety, Not Volume, Is Driving Big Data Initiatives. For large corporations, data variety trumps volume when looking for insights. 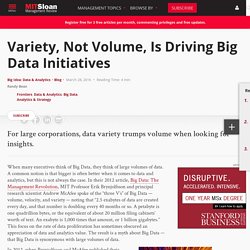 When many executives think of Big Data, they think of large volumes of data. A common notion is that bigger is often better when it comes to data and analytics, but this is not always the case. In their 2012 article, Big Data: The Management Revolution, MIT Professor Erik Brynjolfsson and principal research scientist Andrew McAfee spoke of the “three V’s” of Big Data — volume, velocity, and variety — noting that “2.5 exabytes of data are created every day, and that number is doubling every 40 months or so. A petabyte is one quadrillion bytes, or the equivalent of about 20 million filing cabinets’ worth of text.

An exabyte is 1,000 times that amount, or 1 billion gigabytes.” In 2012, when Brynjolfsson and McAfee published their article, Big Data was a new phenomenon. Big Data: The Management Revolution. Big Data. Home. Content - IEEECS. An IT manager recently told me he hadn’t touched the applications on his mainframe since Y2K. 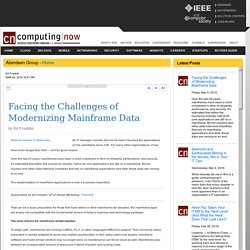 For many other organizations, it has been even longer than that — and for good reason. Over the last 25 years, mainframes have been a solid investment in term of reliability, performance, and security. It’s estimated that within the insurance industry, half of all core applications are still on a mainframe. But for insurers and other data-intensive industries that rely on mainframe applications and data, those days are coming to an end. The modernization of mainframe applications is now a business imperative.

Guest article by Ed Franklin, VP of Global Marketing, TmaxSoft That can be a scary proposition for those that have relied on their mainframes for decades. The main drivers for mainframe modernization To begin with, mainframes are running COBOL, PL/1, or other languages difficult to support. Then there’s the cloud. IEEE Computer Society. From the October-December 2015 issue Learning Visual Semantic Relationships for Efficient Visual Retrieval By Richang Hong, Yang Yang, Meng Wang, and Xian-Sheng Hua In this paper, we investigate how to establish the relationship between semantic concepts based on the large-scale real-world click data from image commercial engine, which is a challenging topic because the click data suffers from the noise such as typos, the same concept with different queries, etc.

We first define five specific relationships between concepts. We then extract some concept relationship features in textual and visual domain to train the concept relationship models. View the PDF of this article View this issue in the digital library Editorials and Announcements Announcements We're pleased to announce that Qiang Yang, head of the Huawei Noah's Ark Research Lab and a professor at the Hong Kong University of Science and Technology, has accepted the position of inaugural Editor-in-Chief beginning 1 Jan. 2015.