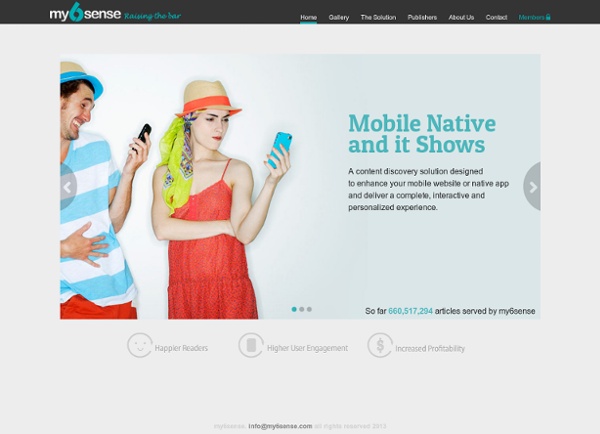 About my6sense My6sense has been a pioneer in native mobile content personalization and discovery since its inception in 2009. Before shifting its focus to the publishing market, the company built a track record developing business-to-consumer products. The my6sense team brings expertise in individual behavior modeling and implicit search capabilities along with a deep understanding of user experience on mobile. This allows my6sense to better target advertising based upon prediction of user intent, which we like to call "digital intuition". The my6sense content discovery bar uses patent-pending technology to help publishers optimize and monetize their mobile e-publishing properties.

GoogleReader is Wrong Editors Note: This is a guest post by Dave Winer, widely considered the father of RSS, a legend of the Internet technology industry and a pioneer of far too many areas to mention. We’re both delighted and privileged to have him contribute to the The Next Web. I was happy to read Richard MacManus’s article about stagnation in the RSS reader market. He said the market is in “disarray” but I believe that’s the wrong word. Google and Tor Project When it comes to code, Google's support has made a big difference to the Tor Project. Providing privacy and helping to circumvent censorship online is a challenge that keeps our software developers and volunteers very busy. The Google Summer of Code™ brings students and mentors in the open source community together to write code for three months every year. A lot of coding got done in a few months in 2009, and Tor was lucky to get a group of students who kept on working past the summer months to improve existing projects and support users. Tor also works on Libevent with Google. All of these changes in software are very exciting, but who is it all for?

We Me We – Why the Curation vs Aggregation Discussion is Messy In Aggregation Is Not Curation – There Is A Big Difference , Tom Foremski provides definitions of curation and aggregation: is a person or persons, engaged in the act of choosing and presenting things related to a specific topic and context. An example of curation: the San Francisco De Young museums is exhibiting post-impressionist masterpieces from the Musée d’Orsay’s permanent collection. is the collection of as many things that can be found related to a topic. Aggregation would be a collection of any or all, post-impressionist masterpieces from Musée d’Orsay’s permanent collection.

RSS Market in Disarray, Continues to Decline One of the interesting trends of 2009 has been the gradual decline of RSS Readers as a way for people to keep up with news and niche topics. Many of us still use them, but less than we used to. I for one still maintain a Google Reader account, however I don't check it on a daily basis. Twitter Chats and Hashtag Conversations By – February 1, 2011 Posted in: Curation Firstly, Twitter chats are awesome. A great dialogue is made possible because such a wide variety of people can participate. And since the nature of Twitter is very open and public, you can just watch the hashtag and still benefit from the tips and conversations. Some popular chats include:

For All the Gloom Around RSS, Readers Continue to Climb Skimming many of the leading technology outlets, you would think RSS had given up its ghost, making way for new services, like Twitter. Just this week, ReadWriteWeb claimed the RSS reader market was in "disarray" and continued a "decline". This came after a summer in which TechCrunch IT's Steve Gillmor declared RSS dead and suggested that it "rest in peace" and others ditched RSS for microblogging lists. With the world watching Twitter's top names and their Suggested User List-boosted following counts cross well into seven digits, data from FeedBurner and other sources shows RSS counts climbing - in some cases dramatically - for nearly all blogs, and a number of them also sport reader counts in the millions. While the independent market for RSS readers may be in bad shape, having ceded ground to Google Reader, RSS as a utility is actually growing. It's not going down, not by a long shot.

Your mobile app is spying on you The odds are pretty good that if you’re a big consumer of mobile apps, the private information on your phone has been collected and sent somewhere without your knowledge. That’s the finding of the App Genome Project mammoth study by Lookout, a mobile security company that has scrutinized more than 300,000 apps on both the iPhone and Android mobile phone platforms. San Francisco-based Lookout provides security such as anti-malware for mobile phones. 8 Ways to Find Great Social Media Content Do you want to know how to find the most valuable social media content? Are you looking for great articles and videos to share with your friends and fans? Be sure to watch this edition of Social Media Examiner TV with our host Mari Smith.

Announcing bit.ly Pro Today we’re pleased to announce a new service: bit.ly Pro. The Pro service provides custom short URLs powered by bit.ly. Publishers and bloggers will be able to use their own short domain names to point to pages on their sites. The Official Lookout Blog July 27, 2010 Click to enlarge infographic The App Genome Project This week at the Black Hat Security Conference, Lookout will unveil the App Genome Project, which is the largest mobile application dataset ever created.