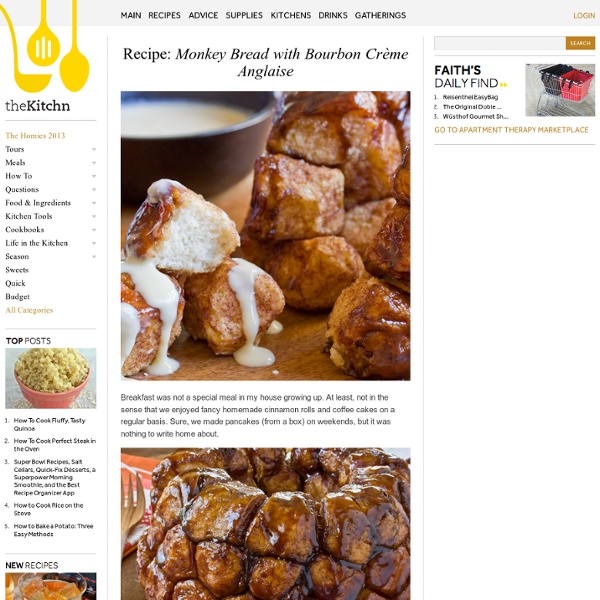 It didn't totally blow up my radar, however, until only a few weeks ago. I was celebrating a bachelorette with some of my favorite girlfriends at a too-cool-for-school Atlanta restaurant. We had already overindulged in one too many courses of food, but our waiter gently encouraged us to order the sampler platter of desserts. Never one to say no to sweets, I caved against my (stomach's) better judgement. I couldn't begin to tell you what else was on that giant tray of desserts. It was the monkey bread that took it all home for the gold. I fell hard for monkey bread that night; I've been waiting patiently for the right time to recreate it. Monkey Bread with Bourbon Crème Anglaise Serves 6-8 For the dough1/4 cup warm water (105-110 degrees)1 envelope (2 1/4 teaspoons) active dry yeast1 1/4 cups whole milk 2 tablespoons unsalted butter1 egg, lightly beaten1/4 cup sugar1 teaspoon salt4 cups all-purpose flour, plus more as needed Combine the brown sugar and cinnamon in a medium bowl.

Banana Bread Cinnamon Rolls What do you get when you combine banana bread with cinnamon rolls? These incredible Banana Bread Cinnamon Rolls! A cinnamon roll and banana bread in one, how could these not be good? Then when they are slathered generously with cream cheese frosting and finished off with toasted nuts, all I can say is wow yum! This is breakfast done right. Baked Egg Boat recipe Breakfast is my favorite meal. I like to drink iced coffee and watch the cream climb its way down the chunky ice cubes in a dazy before the caffeine hits. I like to order bacon with whatever I’m eating. I like eating potatoes with ketchup. I like eggs over easy, and fluffy scrambled eggs.

what goes into making chocolate bowls Leave it up to me to mess up every recipe in the world... but on the flipside, by experiencing everything that goes wrong, I end up learning the most.I had seen these bowls from Stephanie's Kitchen, and decided it was a fantastic idea for my food independent study. ingredients: chocolate, and balloons! first, a giant bar of chocolate all the way from taiwan! and it's -special- grade, whatever that means. QuickieFit - Quick Fitness Workouts - StumbleUpon Workout Time: 12 Minutes Work That Core workout does just what is says, works your core! The best thing you can do for your core is to vary up your exercises. Keep your body guessing. This workout will give your core a nice burn while also strengthening your arms and legs.

Cheesecake Stuffed Strawberries Cheesecake Stuffed Strawberries These cheesecake stuffed strawberries are the perfect dessert treat! Can I just say that I have died and gone to heaven. Cheesecake stuffed strawberries….how have I not made these before?! Self - {Gingerbread Monkey Bread with Creamy Whiskey Maple Glaze} I hate being told to relax. Winter break is over now, and as I look back at how I spent it, I'm in a funk. I want to be more laid back and take more time to just... I don't know... Do absolutely nothing before I graduate, but I can't even stand the thought of just... Not doing something. Bacon Wrapped Jalapenos Recipe One of the best grilled appetizers is bacon wrapped jalapeno peppers. This recipe is so easy to make and it only consist of 3 ingredients; fresh jalapenos peppers, cream cheese, and bacon. The jalapeno peppers are first sliced in half then seeded, stuffed with cream cheese, wrapped with bacon and grilled. You should consider wearing gloves when slicing and seeding the jalapenos because they can burn your hands. With the play offs coming up and the super bowl near this is a perfect recipe for game day. Enjoy.

Japanese Strawberry Shortcake, Recipe Japanese Strawberry Shortcake The Japanese do some amazing things with cake and pastry. They have embraced many Western desserts and made them uniquely their own in many ways. I love a good Japanese sponge cake—moist, light and airy, and not overly sweet. A while back I received an email from Eliane, an LFM reader, who asked me to share a Japanese sponge cake recipe. At the time, I didn’t have a favorite recipe, but told her that I would work on it. Cinnamon Toast&Rolls - Circle B Kitchen - Circle B Kitchen - StumbleUpon The USDA released its new food pyramid the other day (which is actually a plate now instead of a pyramid), and I am sorely disappointed to report that cinnamon rolls did not appear anywhere on that plate. I think by now most of us know what should be on our dinner plate in terms of healthy, well-rounded nutrient-laden meals, but it is my considered opinion that our breakfast plate should include cinnamon rolls now and then. And not just any cinnamon roll, mind you, but how ‘bout a homemade cinnamon roll hybrid that is a cross between a cinnamon roll and cinnamon toast, is super easy to make and gosh darn delicious.

Family Kitchen - StumbleUpon I have been experimenting with different mug cakes every since I heard about them about a year ago. None of them have been winners. They were either too chewy, too dry, or not sweet enough. Well, I continued experimenting, and thought why not add some decadent Nutella into the mix. I modified the classic mug cake recipe, added Nutella, and a little more milk and oil than I had been using before. The results were beyond amazing.

Maple Pecan Sticky Buns The other night, my family invited my sister's and my family over for a breakfast supper to enjoy their freshly-boiled maple syrup. My sister called me up and said, "I'll make the apple crisp if you make the ice cream." Deal. Rainbow Cake in a Jar I’ve always had a penchant for sunshine in a jar. Doesn’t the very phrase itself, “sunshine in a jar,” roll off your tongue and fill your mouth with magic? While I’ve never yet found myself a sunshine in a jar, I think we may have just concocted it in our kitchen tonight.