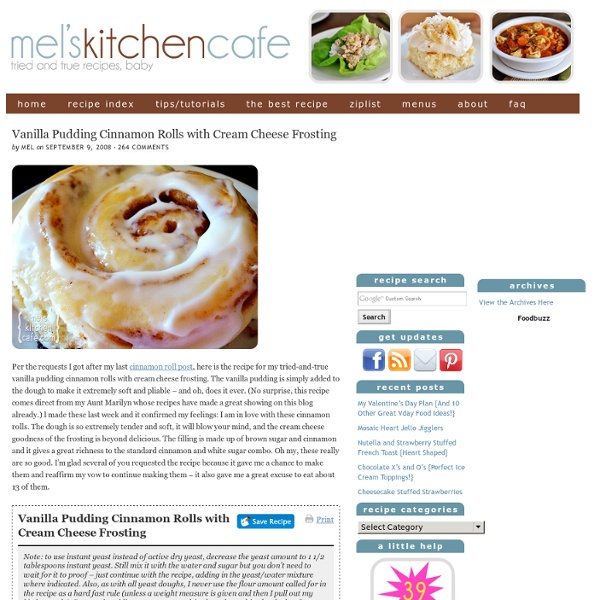 Per the requests I got after my last cinnamon roll post, here is the recipe for my tried-and-true vanilla pudding cinnamon rolls with cream cheese frosting. The vanilla pudding is simply added to the dough to make it extremely soft and pliable – and oh, does it ever. (No surprise, this recipe comes direct from my Aunt Marilyn whose recipes have made a great showing on this blog already.) I made these last week and it confirmed my feelings: I am in love with these cinnamon rolls. The dough is so extremely tender and soft, it will blow your mind, and the cream cheese goodness of the frosting is beyond delicious. Vanilla Pudding Cinnamon Rolls with Cream Cheese Frosting Note: to use instant yeast instead of active dry yeast, decrease the yeast amount to 1 1/2 tablespoons instant yeast. Ingredients Rolls: ½ cup warm water 2 tablespoons active dry yeast 2 tablespoons sugar 3 ½ ounce package instant vanilla pudding ½ cup butter, melted 2 eggs 1 teaspoon salt 6+ cups flour Filling: Frosting: Notes

Scrumptious Baked Cinnamon Breakfast Bites I love a good donut, especially a homemade one. What I don’t love is the pain associated with deep frying them. It is messy, time consuming and certainly more fattening. These baked Cinnamon Breakfast Bites mimic what I love about donut holes but without all the added stress and calories. They are super scrumptious and I encourage you to try them out yourself and see how long they last in your house! Ingredients 1-1/3 cups all-purpose flour 1 cup crisp rice cereal, coarsely crushed 2 tablespoons plus 1/2 cup sugar, divided 3 teaspoons baking powder 1/2 teaspoon salt 1/4 cup butter-flavored shortening 1/2 cup milk 1 teaspoon ground cinnamon 1/4 cup butter, melted Directions Mix flour, crushed cereal, 2 tablespoons sugar, baking powder and salt in large bowl. Cut in shortening with pastry blender or fork until the mixture resembles coarse crumbs. Add milk and stir just until moistened. Roll dough into approximately 2 1/2 dozen 1 inch balls. Mix cinnamon and remaining sugar in a small bowl.

How to Make Marshmallow Fondant This time I decided to make it with those mini fruit flavored marshmallows. I had to sort them by colour first. I figured they would add a little bit of flavor to the fondant so I wouldn't have to add much flavoring oil. I use gel colours to dye my fondant but regular food colouring will work too. You won't be able to get really dark colours without making your fondant sticky, but for lighter colours you can just even it out with more icing sugar. I also had lemon oil and coconut flavoring on hand.. oh la la the value brand (which still works fine). Step One: Take a couple of handfuls of marshmallows and put them in a microwave safe bowl. I like to make smaller batches because its easier to add the colour to the melted marshmallow than it is to work the colour into the fondant later. Step Two: Stick the marshmallows in the microwave for ten seconds at a time until the are puffed up and easily stir into a goo with a wooden spoon. Step Three: Step Four: Fondant with the icing sugar kneaded in.

Apple Pie Egg Rolls : : Miss in the Kitchen Apple Pie Egg Rolls I saw one of the Food Network stars making apple chimichangas and thought I had to have some for myself. I bought flour tortillas and apples, and then I used the flour tortillas for tacos. UPDATE: I did an interview with the Casper Star-Tribune newspaper and they made a video of me making these Apple Pie Egg Rolls! Apple Pie Egg Rolls Ingredients: 1 tablespoon butter 3 cups apples, peeled, cored, and diced 1/4 cup brown sugar 1/2 teaspoon cinnamon 5 egg roll wrappers vegetable oil for frying for garnish: 1 tablespoon sugar mixed with 1/4 teaspoon cinnamon Cooking Directions: In a medium size pan, melt butter, add apples, brown sugar, and cinnamon. Place about 2 tablespoons of apple filling into each egg roll wrapper, wet edges of wrapper with water, roll up sealing edges. Serve with vanilla ice cream and caramel sauce, it’s good! Enjoy! Miss

Watermelonade Recipe at Epicurious.com photo by Roland Bello yield Makes 1 gallon (serves 16) active time 30 min total time 30 min You would be hard-pressed to find something more refreshing than watermelon. Garnish: lemon slices; mint sprigs Preparation Cut watermelon flesh into 2-inch chunks and discard rind. Cooks' note: Watermelonade can be made 1 day ahead and chilled, covered. Overnight Monkey Bread After her kids were grown and starting to have kids of their own my Mom started the tradition of having everyone over for breakfast Christmas morning. She would make Monkey Bread and have it on the table for everyone to snack on while she whipped up eggs and bacon and pancakes. The sweet little puffy balls coated with cinnamon and sugar would disappear one at a time until before you knew it nothing was left. I was a pretty picky eater growing up and I didn’t love Mom’s Monkey Bread because she always added nuts to it. So this year in memory of my Mom I decided it was time to serve Monkey Bread on Christmas morning. I adapted the recipe so that you don’t add all of the flour in the beginning, which gives you more control over the consistency of the dough and prevents adding too much flour, which can be a problem in my dry climate. Ingredients Dough Brown Sugar Coating 1 cup packed light brown sugar 2 teaspoons ground cinnamon 8 tablespoons unsalted butter (1 stick), melted Glaze Directions

Bake It in a Cake & Bake a Heart in a Cake! Pink Heart–Filled Cupcakes with Strawberry Taffy Frosting These vanilla bean cupcakes really have heart. Cut or bite into one to see how much love went into them. The best part: they’re surprisingly simple. And if your sweetheart happens to be a chocolate fan, you could just as easily bake your heart into some chocolate cake batter. If you go that route, I recommend finishing them off with generous spoonful of decadent ganache for a true death-by-chocolate experience. Makes 12 cupcakes Cupcakes ¾ cup (1½ sticks) unsalted butter, at room temperature1½ cups granulated sugar3 large eggsSeeds from 1 vanilla bean2 teaspoons baking powder½ teaspoon baking soda¼ teaspoon salt2½ cups unbleached all-purpose flour1⅓ cups whole milkRed food coloring Frosting 10 bite-sized pieces strawberry taffy2 tablespoons heavy cream1 cup (2 sticks) unsalted butter, at room temperature2 cups powdered sugar12 pieces Sweetheart candy 1. 2. 3. 4. 5. Tip: Don’t know how to use vanilla bean?

That's the Best Frosting I've Ever Had – Tasty Kitchen Bake your favorite chocolate cake and let it cool. In a small saucepan, whisk flour into milk and heat, stirring constantly, until it thickens. You want it to be very thick, thicker than cake mix, more like a brownie mix is. Remove from heat and let it cool to room temperature. (If I’m in a hurry, I place the saucepan over ice in the sink for about 10 minutes or so until the mixture cools.) It must be completely cool before you use it in the next step. While the mixture is cooling, cream the butter and sugar together until light and fluffy. Grab a spoon and taste this wonderful goodness. Cut yourself a piece and put it on a pretty plate. Homemade Soft Pretzel Bites Homemade Soft Pretzel Bites On Fridays, I teach cooking classes to two kids in our neighborhood. They are pretty knowledgeable-so my job is easy:) I think it is fantastic that they want to learn how to cook at such a young age-they are in the 3rd and 4th grade. On Friday we made homemade soft pretzels,the traditional salty ones and cinnamon and sugar pretzels. For fun, we also made pretzel bites. everyone loved these. Is everyone ready for the big game? Buffalo Hot Wings-these are Josh’s all time favorite. My good friend Gaby, from What’s Gaby Cooking, made Pulled Pork Sliders for the big game. Homemade Soft Pretzel Bites Yield: A lot!

Melt In Your Mouth Doughnuts - Super Easy and GREAT For Beginners! Cinnamon Sugar Doughnuts Made With Canned Biscuits Look at that photo. Is your mouth watering yet? How about if I told you that you could make these amazing treats, serving them warm and golden to your family, with no knowledge whatsoever of yeast or dough, no special equipment other than what you likely have on hand, and have them done start to finish in under ten minutes, including prep time? I sound like an infomercial, don't I? Seriously though, we Southerners (and humans in general), love our doughnuts. Mama says you always need to drink a diet coke with doughnuts because it cancels out the calories. Now one of the great things about these is that you don't have to run to Krispy Kreme or Dunkin' and you don't have any evidence to hide! The ingredients are simple and as I said before, you likely have them on hand. In a bowl, stir together cinnamon and sugar. For that very reason, we are going to just use a plain old bottle cap to cut the centers of our doughnuts out. Eat them warm.