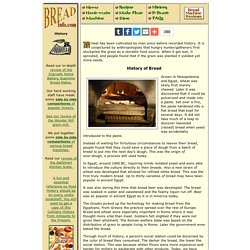 It is conjectured by anthropologists that hungry hunter/gatherers first stockpiled the grain as a storable food source. When it got wet, it sprouted, and people found that if the grain was planted it yielded yet more seeds. A Brief History of Bread - Hungry History. Bread, in all its various forms, is the most widely consumed food in the world. 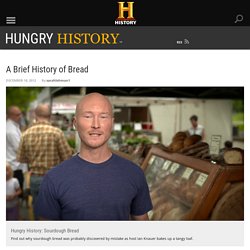 Not only is it an important source of carbohydrates, it’s also portable and compact, which helps to explain why it has been an integral part of our diet for thousands of years. In fact, recent scholarship suggests humans started baking bread at least 30,000 years ago. Prehistoric man had already been making gruel from water and grains, so it was a small jump to starting cooking this mixture into a solid by frying it on stones. A 2010 study by the National Academy of Sciences discovered traces of starch (likely from the roots of cattails and ferns) in prehistoric mortar and pestle-like rocks. The roots would have been peeled and dried before they were ground into flour and mixed with water. But how did humanity get from this prehistoric flatbread to a fluffy, grocery store loaf? History of bread production- BakeInfo (Baking Industry Research Trust) 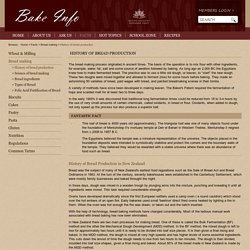 The basis of the operation is to mix flour with other ingredients, for example, water, fat, salt and some source of aeration followed by baking. As long ago as 2,000 BC the Egyptians knew how to make fermented bread. The practice was to use a little old dough, or leaven, to "start" the new dough. These two doughs were mixed together and allowed to ferment (rise) for some hours before baking. Raising Agents: The Agents which give Lift to your Baking! RAISING AGENTS fall into three specific categories: Chemical, Mechanical and Natural The main two Chemical Leaveners used in Baking are: 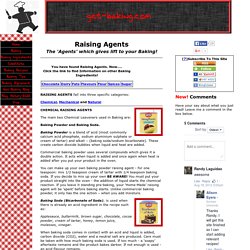 Yeast as a raising agent. Yeast & Raising Agents. Yeast is an organism capable of reproducing itself which when added to bread makes it rise. 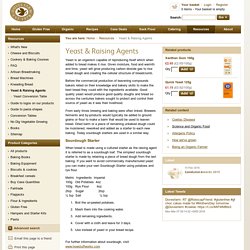 Given moisture, food and warmth and time, yeast will grow producing carbon dioxide gas to rise bread dough and creating the cellular structure of breadcrumb. Before the commercial production of leavening compounds bakers relied on their knowledge and bakery skills to make the best bread they could with the ingredients available. Good quality yeast would produce good quality doughs and bread so across the centuries bakers sought to protect and control their source of yeast as it was their livelihood. From early times brewing and baking were often linked. Brewers ferments and by-products would typically be added to ground grains or flour to make a barm that would be used to leaven bread. Sourdough Starter When bread is made using a cultured starter as the raising agent it is referred to as a sourdough loaf. Boil the un-peeled potatoes. What's In Your Fridge? Raspberry and Blueberry muffins In short raising (or leavening) agents make your cakes and breads rise, your mousse and soufflé light and fluffy. 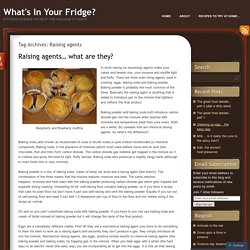 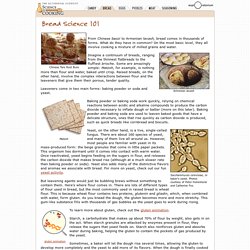 What do they have in common? On the most basic level, they all involve cooking a mixture of milled grains and water. Imagine a continuum of breads, ranging from the thinnest flatbreads to the fluffiest brioche. Some are amazingly simple: Matzoh, for example, is nothing more than flour and water, baked until crisp. Raised breads, on the other hand, involve the complex interactions between flour and the leaveners that give them their porous, tender quality. The Science of Leavening Agents.

The Science of Baking Bread (And How to Do it Right) [Photographs: Vicky Wasik] Welcome back to Breadmaking 101. 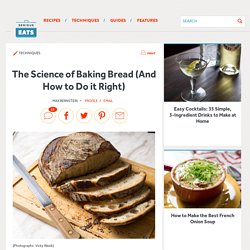 For those of you just tuning in, this column is all about bread, and how to make it yourself in your own home. If you haven't read our previous posts, you can check out the recipe for the workhorse loaf here. Bread and pastry baking on a professional deck and rack oven. Chemistry of Breadmaking: An Introduction to the Science of Baking. How bread is made - making, history, used, parts, machine, History, Raw Materials. History Wheat and barley were two of the earliest plants to be cultivated, and primitive people living as early as 5000 B.C. are known to have eaten these grains. 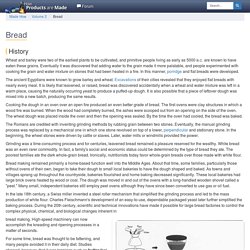 Eventually it was discovered that adding water to the grain made it more palatable, and people experimented with cooking the grain and water mixture on stones that had been heated in a fire. In this manner, porridge and flat breads were developed. The ancient Egyptians were known to grow barley and wheat. Excavations of their cities revealed that they enjoyed flat breads with nearly every meal. Cooking the dough in an oven over an open fire produced an even better grade of bread. The Romans are credited with inventing grinding methods by rubbing grain between two stones. Grinding was a time-consuming process and for centuries, leavened bread remained a pleasure reserved for the wealthy. Bread making remained primarily a home-based function well into the Middle Ages.

Paul Hollywood. Here are some of my top tips to ensure your bakes are perfect every time. 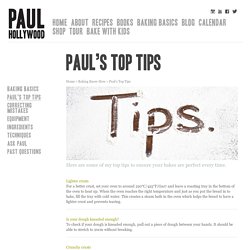 Lighter crustsFor a better crust, set your oven to around 220°C/425°F/Gas7 and leave a roasting tray in the bottom of the oven to heat up. When the oven reaches the right temperature and just as you put the bread in to bake, fill the tray with cold water. This creates a steam bath in the oven which helps the bread to have a lighter crust and prevents tearing. Is your dough kneaded enough? Bread Baking Tips and Techniques. 8 Tips For Better Bread Making. How to Bake Great Bread at Home Many people are extremely intimidated by bread making. I’ve heard folks say everything from “I’m afraid of yeast,” to “I can’t make bread.” And that last is usually before they even try their hand at it.

How to shape bread: Loaf, roll and single plait. How to Knead Dough. An A-Z of breads from around the world. Ever wondered about the difference between chapatti and parathas, or wanted to be able to tell your focaccia from your grissini? Ana Blanco explains all this and more in our A-Z of world breads. Arepa Steven Depolo / Via Flickr.com Arepa is a flat, round, cornmeal patty that is eaten in Venezuela and Colombia. It can be baked, fried or cooked on a charcoal grill, with fillings like grated cheese, ham, black beans, chicken salad and avocado, shredded beef or perico (Venezuelan-style scrambled eggs). Bagel. Fabflour.co. Bara Brith – Fruited bread from Wales of which there are many varieties, some made with yeast and others baking powder.

Traditionally eaten sliced and buttered.Barrel – Usually made with a milk bread dough, baked in a ridged mould. Also known as a pistol.Batch – Loaf baked in a batch with others, rather than separately, wholemeal.Bloomer – Thick, long, white loaf, lightly cut across the top so that the cuts open out or ‘bloom’ to give a crisp crust. Sometimes sprinkled with poppy seeds.Buttery Rowies – Traditional Aberdeen butter yeast rolls.

Shaped in a round or oval with a crisp crust and light flaky texture.Cob – Round smooth crusted loaf often topped with cracked wheat.Coburg – Round, crusty white loaf with a deeply cut cross on the top.Cornish Splits – Sweet, light yeasted buns enriched with butter and milk. Also called Devonshire splits. More types of British breads. What The Heck Is Gluten? Bread, buns and early mornings.