No Knead English Muffin Bread. Bread_BlogBundle_1.pdf. Whole-Grain Pumpkin Yeast Bread. A large turkey, a small group of friends, and The Big Game makes for the best of Thanksgiving holidays to me. 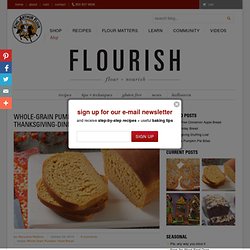 And I’ll bet that many of you have the same thought as I do when the turkey comes out of the oven. Sure, you’re excited about the first round of turkey and gravy on your plate, but aren’t you already thinking about the cold turkey sandwiches that come later in the day? I know I am. In fact, I think about those sandwiches often enough that my hubby and I will make them even in the height of summer. While I do skip the actual roasting of the turkey, we pick up a roasted chicken at the store, make the stuffing, open the cranberry sauce, and bake up a loaf of homemade bread. Homemade sandwich bread - Flourish - King Arthur Flour. You’ve mixed and kneaded flour and water, salt and yeast, maybe a touch of sugar, some milk, butter, perhaps an egg… You’ve shaped a loaf, put it into your pan, watched it rise over the rim. 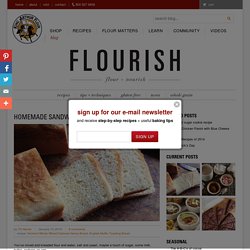 Tucked that precious loaf into your preheated oven, and watched proudly as it rises some more and becomes wonderfully golden. Then, you reach into the oven for your perfectly glorious loaf of homemade sandwich bread, and… Well, as they say on Facebook, what happens next may surprise you. Your bread falls – or shrinks, another type of falling. What’s a sandwich bread lover to do? The following tips guide you through those crucial moments between hot-from-the-oven and cool-on-the-counter. Sallys Baking Addiction Giant Cinnamon Roll Cake. Learn how to make a beautiful, fluffy, and soft cinnamon roll cake using my kitchen-tested dough recipe. 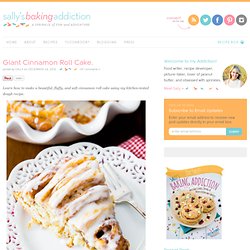 The happiest of holidays to you. Why not celebrate with a giant cinnamon roll the size of a cake? Tis the season. The Month of Bread: Perfect Pretzels. Okay. 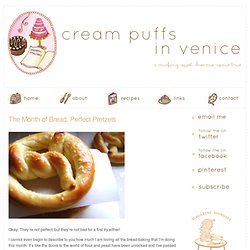 They’re not perfect, but they’re not bad for a first try either! I cannot even begin to describe to you how much I am loving all the bread-baking that I’m doing this month. It’s like the doors to the world of flour and yeast have been unlocked and I’ve passed through them, never to turn back. My dough hook has been retired and I’m kneading, kneading, kneading all the time, notwithstanding the no-knead bread phenomenon that has taken the world by storm. I spent most of Sunday afternoon in a warm kitchen kneading to my heart’s content and occasionally looking out the window at a squirrel foraging for some last minute food before winter really hits us. 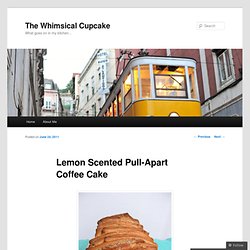 I used to loooove those as a kid. My favorite (and ONLY) way to eat them was to unravel the little roll. Slowly peel it away and eat it layer by layer. I used to do the same with cinnamon rolls and flaky layer biscuits. Not much has changed by way of my odd layer quirk. Vanilla Pudding Cinnamon Rolls with Cream Cheese Frosting. Per the requests I got after my last cinnamon roll post, here is the recipe for my tried-and-true vanilla pudding cinnamon rolls with cream cheese frosting. 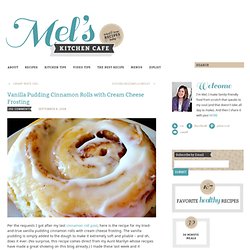 The vanilla pudding is simply added to the dough to make it extremely soft and pliable – and oh, does it ever. (No surprise, this recipe comes direct from my Aunt Marilyn whose recipes have made a great showing on this blog already.) I made these last week and it confirmed my feelings: I am in love with these cinnamon rolls. The dough is so extremely tender and soft, it will blow your mind, and the cream cheese goodness of the frosting is beyond delicious. The filling is made up of brown sugar and cinnamon and it gives a great richness to the standard cinnamon and white sugar combo. Vanilla Pudding Cinnamon Rolls with Cream Cheese Frosting Note: to use instant yeast instead of active dry yeast, decrease the yeast amount to 1 1/2 tablespoons instant yeast.

Ingredients. How To Make Easy Rosemary Focaccia. I'll be honest with you: I don't care for focaccia that's topped with a lot of stuff. 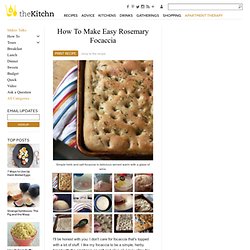 I like my focaccia to be a simple, herby bread with the emphasis on salt and olive oil. I may allow for one or two additions besides the sea salt, olive oil and herbs. But that's it. You may feel differently, and of course, that's just fine. You can use this recipe as a base for all your favorite focaccia toppings. This recipe is close to one we featured a few years ago, from the fine ladies at Canal House Cooking. This dough is fairly wet, but the addition of olive oil means it will still be pliable and easy to work with.