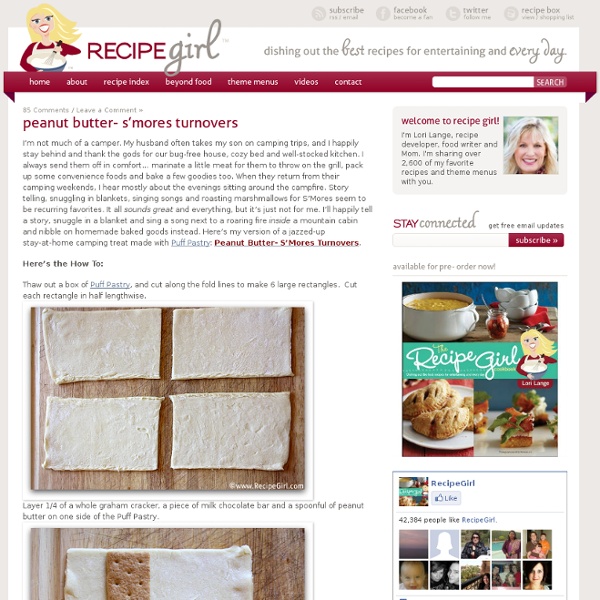 Peanut Butter- S’Mores Turnovers I’m not much of a camper. My husband often takes my son on camping trips, and I happily stay behind and thank the gods for our bug-free house, cozy bed and well-stocked kitchen. I always send them off in comfort… marinate a little meat for them to throw on the grill, pack up some convenience foods and bake a few goodies too. When they return from their camping weekends, I hear mostly about the evenings sitting around the campfire. Story telling, snuggling in blankets, singing songs and roasting marshmallows for S’Mores seem to be recurring favorites. Here’s the How To: Thaw out a box of Puff Pastry, and cut along the fold lines to make 6 large rectangles. Layer 1/4 of a whole graham cracker, a piece of milk chocolate bar and a spoonful of peanut butter on one side of the Puff Pastry. Wet the edges with water (dip your finger in water and gently touch along the edge), fold over the filling ingredients and press edges together.

The $1 Survival Knife The guys over at M40 Project came up with a super simple, and cheap, way to make a very cool survival knife. First you start out with a Sawzall Blade, this one is a rather wide blade rated for cutting metal. Next, you draw out the basic design on the blade with a sharpie marker… Then, grind out the metal to fit the design…

Cinnamon Roll Cookies Forget the weights get your bicep curl on in this hand to mouth cookie lift. For a heavier lift, stack a few cookies together. Then have a few more for some extra reps and your arms should be perfectly sculpted. See these cookies not only taste good, but they will make you look good. No lie. Cinnamon Roll Cookies

I’m obsessed with…THIS PIRATE BEDROOM! « blah blah blah… I’m obsessed with…THIS PIRATE BEDROOM! <——– Take a minute and *like* my page on Facebook! Thanks! :) I think we can all agree this is the COOLEST. BEDROOM. Salted Chocolate We’re watching our friend’s cat right now, and it’s a lot of fun. Kramer and I want to get a pet so badly, but I just don’t think that I have the time, energy, or, frankly, money, to take care of an animal the way I would like to. For now, though, it’s just fun to pretend to have a pet for a week.

Chocolate Cupcakes with Flaming Strawberries Call me easily amused, but these little torch-topped cupcakes delight me. Besides being a cute novelty item for a party, I think they would add a little drama to the end of a romantic meal. I've been looking for something different to serve for Valentine's dessert, and this is definitely different. EyeWitness To The Middle Ages and Renaissance Life in a Christian Monastery, ca. 585"When he was dead his body was not placed with the bodies of the brethren, but a grave was dug in the dung pit, and his body was flung down into it. . . " Crime and punishment in a medieval monastery: the monastery's Abbott provides insight into the monastic life. The Vikings Discover America, ca. 1000"There was no want of salmon either in the river or in the lake." Five hundred years before Columbus, the Vikings discover a New World. Invasion of England, 1066The Norman conquest of Anglo-Saxon England described through the images of the 900 year-old Bayeux Tapestry.

Carrot Pulp Cake with Maple-Orange Cream Cheese Frosting Earlier this year I tried to make a soup out of green apple peels left over from a flurry of apple cake making. I had the best of intentions and, for a brief while, envisioned inventing something splendid. The results (I'm sad to say) were actually quite disastrous. I might even go as far as calling them disgusting. We tossed the whole (stinky) pot in the toilet and pretended like the whole thing never happened. I still have dreams of using my apple peels for something other than filling the trash, but until that day comes, I can at least comfort myself with my ability to use carrot pulp.

One Dollar Bill Art by Atypyk Two brilliant French artists, Ivan Duval and Jean Sebastien Ides, show us how to have fun with one dollar bill. To see more work by Atypyk, visit atypyk.com Easy Homemade Ice Cream without a Machine July is National Ice Cream month, and I’m so excited to show you how making your own homemade ice cream is easier than you may think! No ice cream maker? No problem. Out of rock salt? Don’t need it! No-Bake Chewy Cookies and Cream Bars Oh how I love a treat that can be whipped up in about 15 minutes. My boys and their buddies couldn’t get enough of these Chewy Oreo Bars we had as an after school snack this week. Sometimes my spontaneous recipe creations turn out to be the most fun, lol!