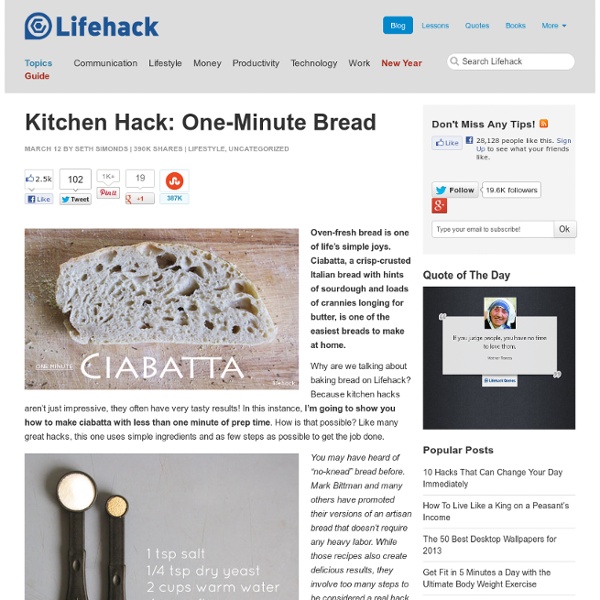 Oven-fresh bread is one of life’s simple joys. Ciabatta, a crisp-crusted Italian bread with hints of sourdough and loads of crannies longing for butter, is one of the easiest breads to make at home. Why are we talking about baking bread on Lifehack? Because kitchen hacks aren’t just impressive, they often have very tasty results! In this instance, I’m going to show you how to make ciabatta with less than one minute of prep time. How is that possible? You may have heard of “no-knead” bread before. I wanted something very, very simple that delivered great results in 60 seconds of prep time or less. For your ciabatta you’ll need: 4 cups of all-purpose flour (do NOT pack the flour into the measuring cup)2 cups of warm water1 teaspoon of salt1/4 teaspoon of granulated yeast (or equivalent) For the gorgeous readers needing metric equivalents of this recipe, Toon left a comment with the following conversion: Have everything handy? 1. 2. Add flour and salt to your bowl of yeasty water. 3. 4. 5.

Easy Brazilian Cheese Bread (Pão de Queijo) Recipe Print Our tour of Brazil continues. After posting the moqueca recipe, several of you asked if I had a recipe for Pão de Queijo, or Brazilian cheese bread, sort of like a chewy cheese puff made with tapioca flour. As a matter of fact, I do. My friend Bill gave me this recipe years ago, a favorite from his Brazilian wife Silvia. I’ve made it several times, each time with different cheeses. The Best New Way to Bring Your Lunch I’ll admit it—my workday lunches can get pretty boring. I always think I’m going to finally make use of all those delicious recipes I’ve been pinning away, but then nighttime rolls around and I’m too busy watching really important things like The Bachelorette and Vampire Diaries. And then morning comes, and I’m running around like a headless chicken and I’m lucky if I remember my keys and bus pass on the way out the door, let alone find time to throw a tasty lunch together. But with a teensy amount of planning, delicious lunches can be just a few easy steps away. All it takes is a trip to the grocery store on a Sunday afternoon, a couple pantry staples, some mason jars, and an hour of your time. Why mason jars, you might ask?

Nutella Cinnamon Rolls May 10, 2011 | Print | E-mail | Filed under bread, nutella There are some days that I just lose my appetite. It might be because of my mood, or that nothing sounds good, or that I’m in a food rut again and need to spice things up a bit. Kerala Parotha, a Flakey South-Indian Flatbread There are a million good reasons to visit South India. The people, for one, are amazing – warm-hearted, generous, and absolutely vibrant in culture. Then there’s the setting – think, the most amazing beaches you have ever seen.

Flatbreads Recipe Naan Bread Ingredients • 4tsp. instant dry yeast • 1scant cup warm milk • 1T sugar • 1egg • 1T yogurt • ½cup olive oil • 4cups all-purpose flour • 1tsp. salt • 1cup melted butter • 4T Madras curry powder • 2tsp. nigella seeds or black sesame seeds • 2T coarse sea salt Special equipment: pizza stone The Family Kitchen Cherry Limeade While my family loves fresh homemade lemonade, we also like to change it up and make limeade too. Limeade is made exactly the same way as lemonade. There are some recipes floating around the web about putting the whole limes in a blender to make limeade. However, after experimenting with this method, I would not recommend it unless you love extremely bitter drinks.

Pita Bread Pita Bread There are SO MANY things out there that just taste better when you make them at home. It’s especially nice when you can say that about something that’s really easy to make as well. These pitas fit into both of those categories. Sourdough Bread Throughout my entire life as a cook, nothing has been so vexing as perfecting Sourdough Bread. Equally vexing was the breadth of time required in order to determine each effort’s degree of failure. Several batches required up to twenty hours of ‘resting’ time and, thus, it would be two days later that I discovered that sourdough nirvana remained out of reach. Other tricky foods, for example, soufflés, hot emulsions and clear jellies require no large investment of time in order to fail, and can, in fact, be quickly tossed out and a second endeavor completed before anyone lingering has blinked an eye. Not so for the elusive sourdough which must be fed, rested and babysat like an errant child before a simple bread dough is even stirred together. Two weeks and many five-pound bags of flour later, gratification landed with a thud on the cutting board.

Homemade Tortillas Making soft delicious tortillas at home is surprisingly easy. In fact, once I started making my own suddenly all our dinners and lunches were rolled up in fresh tortillas. The dough is made from flour, shortening, water, and salt. I had all the ingredients on hand but the shortening.. which ended up only costing two dollars and has lasted through many many batches of tortillas. Considering how cheap the ingredients are and how delicious they taste it just doesn't make sense to pay for the much more expensive packaged ones. Amazing Artisan Bread for 40 Cents a Loaf - No Kneading, No Fussing, No Kidding Update: If you're interested, I've written an update on this technique here. What if I told you that instead of buying bakery bread for four or five dollars a loaf, you could make delicious handmade bread whenever you wanted, at a fraction of the cost and it is so easy a kid could do it? Well, read on because this method of making artisan bread at home will change your life.