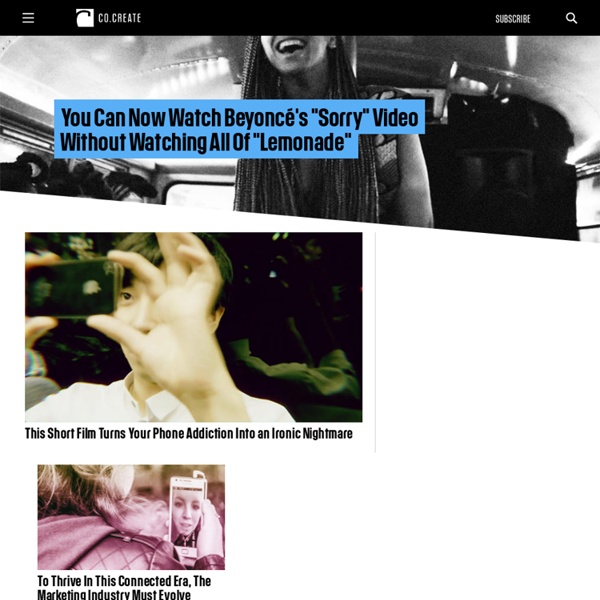 dumbdumb dumbdumb is an award-winning comedy enterprise led by Hollywood handsome guys, Will Arnett and Jason Bateman. We create and produce brand-inspired digital content for distribution across all platforms. Using a brand’s personality, marketing objectives, and Arnett and Bateman’s well-known comedic tone, dumbdumb enhances traditional marketing, advertising, and is ultimately revolutionizing the way advertisers connect with their audiences. With the backing and distribution power of Ben Silverman’s Digital Entertainment Studio, Electus, and Barry Diller’s IAC/Interactive Corp, dumbdumb is a valuable strategic and creative resource for brands looking to harness the power of entertainment and humor. In 2012 dumbdumb made its first foray into film with a feature-length documentary co-produced with Electus.

Understanding & Growing Your Creative Mind Pt. 1/3 This is a very difficult and abstract topic. Even though it’s one we know well, there is no question the core aspects of this concept are difficult to grasp. Creativity is a foundational and highly celebrated part of our reality and a critical factor of many modern-day careers, passions and hobbies. Many of us desire and celebrate this phenomenon, but the foundational aspects can be elusive. How does one become creative?

Branded Content: Not a Good Idea Branded content. It sounds awesome, doesn't it? After all, our industry is married to the content industry. TV commercials keep the lights on at every broadcast network, and indirectly keep the cable bill low enough that HBO can exist. Pluck't Krop Daily Staff Selections An inspiring peek at a few of the finest portfolio pieces as they are added by our users daily. Loading These 30 Creative Ambient Ads Know How To Grab Your Attention Companies trying to sell you a product will do anything to cram their ads down your throat, but it’s always nice when they show a bit of creativity and taste when trying to get your attention. Ambient ads are one such specific form of advertisement, which seeks at once to become a part of its environment and to draw your attention to it. Whether it’s a spoof product, a well-placed and designed billboard, or something else, the point is to get your attention and make you think. It all began when the power of traditional media started declining, giving way to innovative off-the-shelf advertising ideas.

John Cleese on the 5 Factors to Make Your Life More Creative by Maria Popova “Creativity is not a talent. It is a way of operating.” Much has been said about how creativity works, its secrets, its origins, and what we can do to optimize ourselves for it. 3 Ways to Improve Your Company's Social Media Architecture Joshua-Michéle Ross (@jmichele) is SVP and director of digital strategy, Europe with Fleishman Hillard and an O’Reilly Radar blogger. His free ebook on social media architecture is available here. While the pressures on large organizations to use social media have gone up, creating a social media presence has reached one-click simplicity. The result is a sprawling mess. Take one look at the social media footprint of any large brand and you find dozens of social sites that lie abandoned with no active engagement.

Digital Paper Could Become Like 'Google Docs for Artists' Computer engineers have turned ordinary paper into a display with a UV lighting technique, which could one day help artists work on real-time collaborations from opposite sides of the world. Researchers from the Naemura Group at the University of Tokyo call the method “paper computing technology”. Ordinary paper is coated with a photochromic material, which changes color when light is shone on it. A pen filled with commonly available Frixion thermo-sensitive ink (which disappears when heated) is then used to draw the image, and a digital UV projector with a resolution of 1,024×768 can be used to copy or print that image onto the paper again.

AdFreak Need a new reason to cry at weddings? Tosando, a Japanese company that offers musical instruments and lessons, is pleased to oblige with this intense, time-tripping tear-jerker. The short film tells the story of a widowed, middle-aged father and his daughter on her wedding day. At the reception, dad sits at the piano and attempts to play Pachelbel's Canon, which opens the floodgates for memories both happy and sad. The flashbacks are a tad disorienting at first, but you'll get the gist.

More time means more money: the link between creativity and time To Our Faithful Current.com Users: Current's run has ended after eight exciting years on air and online. The Current TV staff has appreciated your interest, support, participation and unflagging loyalty over the years. Graphene-made e-paper by 2015 and anticancer drugs by 2030 Ultra-strong and self-healing copycat material graphene has been the subject of intense excitement since Andre Geim and Konstantin Novoselo extracted it from bulk graphite in 2004, earning them the Nobel Prize in Physics in 2010. Now, an international team of physicists led by Novoselo has published a paper laying out a timeline of future uses for the incredibly versatile material, which includes its role in anticancer drugs and rollable e-paper. "A roadmap for graphene", published in the journal Nature, proves that the one atom-thin super-conductive material has plenty of future uses outside of electronics, though it will be an integral part of the imminent future development of devices. That's because the type of graphene needed for things like touchscreens is of a lower, more easily manufactured quality. "Different applications require different grades of graphene and those which use the lowest grade will be the first to appear, probably as soon as in a few years," said Novoselov.

Idea Person’ 10 TIPS In an age where new ideas quickly becomes commodity, creativity is a must. It is creativity that continuously give us new ideas to keep us ahead in the competition. Regarding this, I recently found an interesting book: Thinkertoys by Michael Michalko.