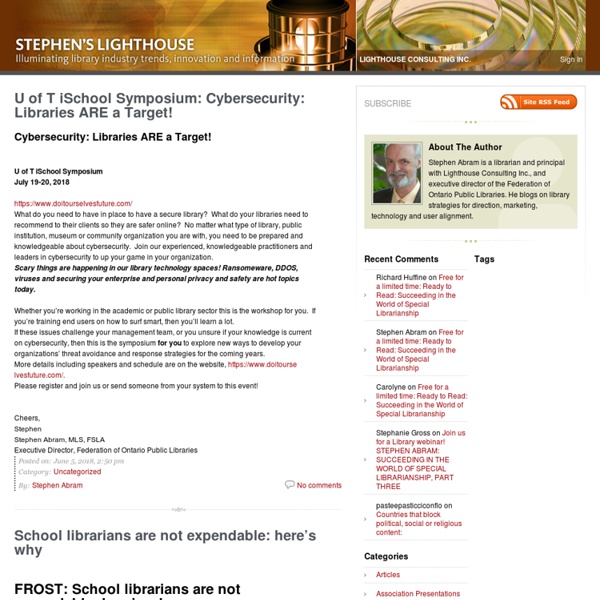 From HBR Blog: How to engage your employees and stop wasting everyone’s time: http://bit.ly/1hIzC8O Stephen Librarians are #38 on the list. Click the “all 200” link in the box to see the details. A friend’s comment: “also…the description of the librarian is so 20th century for most people.

Karen Blakeman's Blog Locating images that can be re-used, modified and incorporated into commercial or non-commercial projects is always a hot topic on my search workshops. As soon as we start looking at tools that identify Creative Commons and public domain images the delegates start scribbling. Yes, Google and Bing both have tools that allow you to specify a license when conducting an image search but you still have to double check that the search engine has assigned the correct license to the image. There may be several images on a webpage or blog posting each having a different copyright status and search engines can to get it wrong. Flickr’s search also has an option to filter images by license and there are sites that only have Creative Commons photos, for example Geograph. But the problem is that you may have to trawl through several sites before you find your ideal photo.

Public Library Services Hashtags are used in social media to connect people in discussing the same topic, even if they don’t know each other. For example, during the current test cricket series, people have been commenting using the #ashes hashtag. The British Library uses hashtags for all their exhibitions.

Library 2.0: Not Just for Users The con­cept of “Library 2.0″ has been around long enough now that we’ve gone through all the stages and argued it to death, as noticed by Andy Wood­worth in a post titled Decon­struct­ing Library 2.0. That’s a good thing, and you should go read his thoughts on the subject. No mat­ter which side you of the debate you come down on, you can prob­a­bly prove your case. Me? I agree with Andrew Burkhardt when he notes, “The time has come for libraries to be social on the web. Social is the new nor­mal.

2¢ Worth Listen A few weeks ago I worked and attended North Carolina's ISTE affiliate conference. I opened the NCTIES conference with a breakfast keynote address and Marc Prensky closed it with a luncheon keynote the next day. Sadly, I missed the second day of the conference. Seth's Blog We still teach a lot of myths in the intro to economics course, myths that spill over to conventional wisdom. Human beings make rational decisions in our considered long-term best interest. Actually, behavioral economics shows us that people almost never do this.

Nailing the Library Interview « Mr. Library Dude Getting that librarian position can be a daunting process. First, you write your cover letter and resume. You wait. A SWOT Analysis for Social Media in Libraries In Search of..... - TV.com www.tv.com/shows/in-search-of Narrarated by Leonard Nimoy, In search of was a 30 minute syndicated show that covered a wide range of paranormal topics.

Teach Mentor Texts: It's Monday! What Are You Reading? 2/4/13 It’s Monday! What Are You Reading? From Picture Books to YA! It's Monday! What are you Reading? Information & Advice Blog The UK economy is recovering from the deepest recession since the Second World War and this recovery has been slower than forecast. According to the latest figures from The Ofﬁce for Budget Responsibility, the economy is predicted to shrink by 0.1 per cent in 2012. Chancellor George Osborne used his Autumn Statement , delivered last Wednesday, to announce a one year extension of the "era of austerity" to 2017-18.

On Libraries, Rhetoric, Poetry, History, & Moral Philosophy You know when someone at Scholarly Kitchen thinks your anti-open access rant is excessive you’ve crossed some sort of threshold. You also know that when a biologist and a co-founder of the Public Library of Science bothers to give your article a thorough fisking, you have people’s attention. Even Roy Tennant seems a little riled, and he’s usually pretty calm. E-journals: their use, value and impact - final report This two-part report takes in-depth look at how researchers in the UK use electronic journals, the value they bring to universities and research institutions and the contribution they make to research productivity, quality and outcomes. Journal publishers began to provide online access to full-text scholarly articles in the late 1990s, triggering a revolution in the scholarly communications process. A very high proportion of journal articles are now available online 96 per cent of journal titles in science, technology and medicine, and 86 per cent of titles in the arts, humanities and social sciences. It’s clear that e-journals have given researchers an unprecedented level and convenience of access to knowledge in scholarly articles, but what effect have they had on the ways in which researchers seek information? Do they provide good value for money to higher education libraries and what are the wider beneﬁts for universities and research institutions?

So You Want to Read YA? Guest Post from teacher Jillian Heise This week's "So You Want to Read YA?" contribution comes from teacher Jillian Heise! Jillian Heise has been teaching middle school language arts for eight years giving her the opportunity to discuss thoughts and insights about books with real teen readers. She is currently teaching 7th & 8th graders at a K-8 school near Milwaukee, Wisconsin. Her students have access to her classroom library of over 1,300 books, and are used to her sharing her reading life, the importance of making reading a habit, appreciation for rockstar authors, and love of fictional characters with them.