Best way to export iPhoto library? Have a look at my first post on this thread, which predates that export option in iPhoto, that pretty much deals with the issue with older versions. 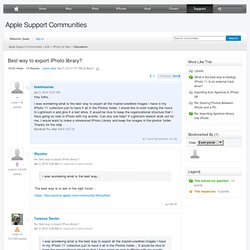 One of those options is free. I'm just kind of irked by the idea that you should treat folders and files on your own computer as untouchable. There are a couple of ways to look at this. One: they're not at all untouchable. You have described perfectly how you might touch them. . Two: If you're the kind of person who really needs to visit with your files and folders for some reason, then run a referenced library. Three: The bigger issue here is that you're going to have problems in the future. These two user tips explain this is more detail: Regards. Aperture 3 User Manual: Importing Masters for Referenced Images into Folders. When you import images as referenced images, you can have Aperture place their masters individually into a selected folder or create subfolders to hold the files. 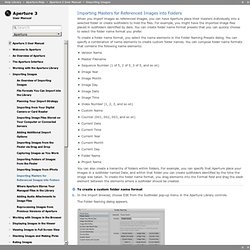 Hi all, I´v have an kind of odd question. 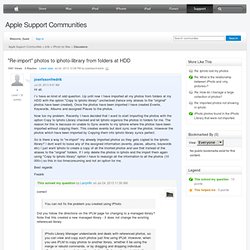 Up until now I have imported all my photos from folders at my HDD with the option "Copy to Iphoto library" unchecked (hence only aliases to the "original" photos have been created). Once the photos have been imported I have created Events, Keywords, Albums and assigned Places to the photos. Now too my problem. Recently I have decided that I want to start Importing the photos with the option Copy to Iphoto Library checked and let Iphoto organize the photos in folders for me. Fat Cat Software – iPhoto Library Manager.

PowerPhotos now available for managing libraries with Apple's new Mac Photos app iPhoto Library Manager allows you to organize your photos among multiple iPhoto libraries, rather than having to store all of your photos in one giant library. 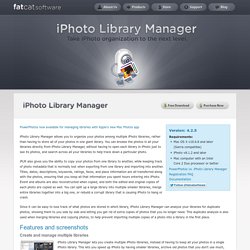 You can browse the photos in all your libraries directly from iPhoto Library Manager, without having to open each library in iPhoto just to see its photos, and search across all your libraries to help track down a particular photo. iPLM also gives you the ability to copy your photos from one library to another, while keeping track of photo metadata that is normally lost when exporting from one library and importing into another. Titles, dates, descriptions, keywords, ratings, faces, and place information are all transferred along with the photos, ensuring that you keep all that information you spent hours entering into iPhoto. Create and manage multiple libraries. Merge Iphoto into Aperture and make all. .........still having trouble and looking for suggestions/solutions. 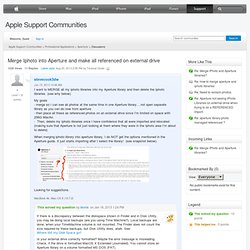 I cleaned up my MacAir harddrive the best I could and now when I GET INFO on HD it says 137GB of 250GB available. I do a GET INFO on the Iphoto Library (CARS) out on my external drive that I'm wanting to MERGE. It shows size of 83GB. fyi there is ~900GB free space on external drive. First, I tried from Aperture......File/import/library/select CARS on external drive. After some time calculating, it gave message NOT ENOUGH SPACE available. Next, I tried just copy and past the CARS library from external to the MacAir HD. Again as noted in the original post, I do want all the pictures in the same library and aware of the ability to open both kinds of libraries in the new format (seems to be a common answer and work for some). Ideas? Thanks in advance. Aperture 3.3: How to use Aperture to merge iPhoto libraries. Languages Aperture 3.3 (or later) and iPhoto 9.3 (or later) use a new library format that lets you open both iPhoto and Aperture libraries using either application. 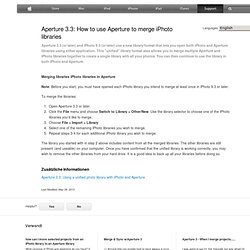 This "unified" library format also allows you to merge multiple Aperture and iPhoto libraries together to create a single library with all your photos. You can then continue to use the library in both iPhoto and Aperture.