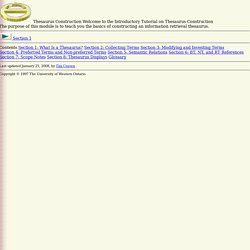 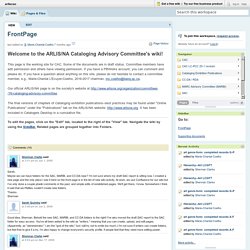 Some of the documents are in draft status. Committee members have edit permission and others have viewing permission. If you have a PBWorks account, you can comment and please do. If you have a question about anything on this site, please do not hesitate to contact a committee member, e.g., Marie-Chantal L'Ecuyer-Coelho, 2016-2017 chairman, mc.coelho@banq.qc.ca. Our official ARLIS/NA page is on the society's website at The final versions of chapters of Cataloging exhibition publications--best practices may be found under "Online Publications" under the "Publications" tab on the ARLIS/NA website: It has been included in Catalogers Desktop in a cumulative file.

To edit the pages, click on the "Edit" tab, located to the right of the "View" tab. A Short History of the Index Card. The French libraries initially used playing cards. 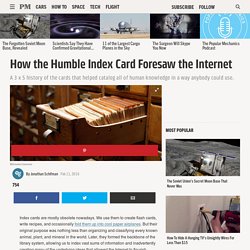 But by the nineteenth century, libraries in the United States and Europe began using index cards. Either way, the transition to cards made the indexing of collections much easier. For each book the library acquired, a new card simply could be added to the catalog. The index card movement for libraries started in France during the French Revolution. Coyle's InFormation: More is more. Here's something that drives me nuts: These are two library catalog displays for Charles Darwin's "The original of species". 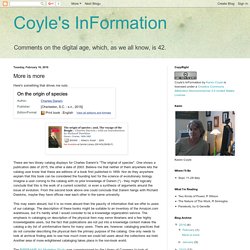 One shows a publication date of 2015, the other a date of 2003. Believe me that neither of them anywhere lets the catalog user know that these are editions of a book first published in 1859. Nor do they anywhere explain that this book can be considered the founding text for the science of evolutionary biology. Cataloging as Value-Added Library Service. A Change in the World of Cataloguing blog. Occasionally we get asked as cataloguers “What is it that you do?”. 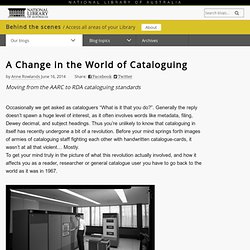 Generally the reply doesn’t spawn a huge level of interest, as it often involves words like metadata, filing, Dewey decimal, and subject headings. Thus you’re unlikely to know that cataloguing in itself has recently undergone a bit of a revolution. Before your mind springs forth images of armies of cataloguing staff fighting each other with handwritten catalogue-cards, it wasn’t at all that violent… Mostly. To get your mind truly in the picture of what this revolution actually involved, and how it affects you as a reader, researcher or general catalogue user you have to go back to the world as it was in 1967.

Surviving Cataloging Class. Editor’s note: This is a guest post by Tracy Wasserman. 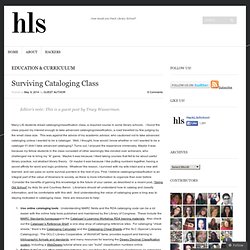 Many LIS students dread cataloging/classification class, a required course in some library schools. I found the class piqued my interest enough to take advanced cataloging/classification, a road travelled by few judging by the small class size. This was against the advice of my academic advisor, who cautioned not to take advanced cataloging unless I wanted to be a cataloger. Are Dewey’s Days Numbered?: Libraries Nationwide Are Ditching the Old Classification System. By Tali Balas Kaplan, Andrea K. 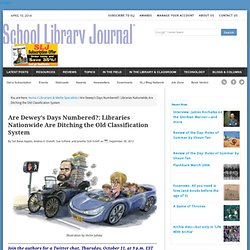 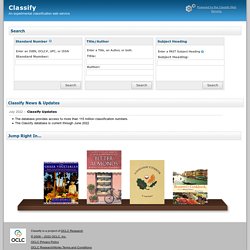 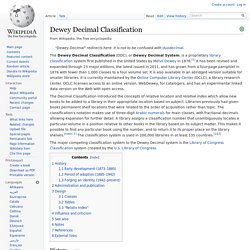 It is not to be confused with duodecimal. The Dewey Decimal Classification (DDC), or Dewey Decimal System, is a proprietary library classification system first published in the United States by Melvil Dewey in 1876.[1] It has been revised and expanded through 23 major editions, the latest issued in 2011, and has grown from a four-page pamphlet in 1876 with fewer than 1,000 classes to a four volume set. It is also available in an abridged version suitable for smaller libraries. It is currently maintained by the Online Computer Library Center (OCLC), a library research center. OCLC licenses access to an online version, WebDewey, for catalogers, and has an experimental linked data version on the Web with open access. The Decimal Classification introduced the concepts of relative location and relative index which allow new books to be added to a library in their appropriate location based on subject. 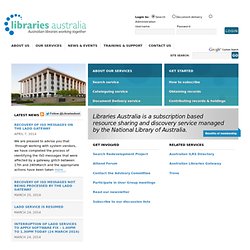