The Library Of Babel 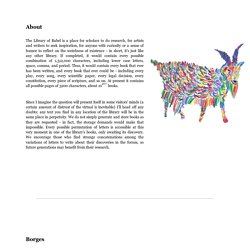 If completed, it would contain every possible combination of 1,312,000 characters, including lower case letters, space, comma, and period. Thus, it would contain every book that ever has been written, and every book that ever could be - including every play, every song, every scientific paper, every legal decision, every constitution, every piece of scripture, and so on. At present it contains all possible pages of 3200 characters, about 104677 books. Since I imagine the question will present itself in some visitors’ minds (a certain amount of distrust of the virtual is inevitable) I’ll head off any doubts: any text you find in any location of the library will be in the same place in perpetuity.

Borges Everything will be in its blind volumes. Summary. The Universe, also known as the Library, is made up of a series of identical hexagon-shaped rooms. 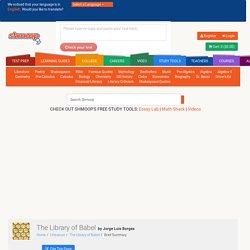 Each room has four walls of books, tiny closet-like spaces for sleeping and using the restroom, and hallways that lead to other hexagons. The hallways contain spiral staircases, which lead up and down to other, identical levels. Reference Hex. It’s easy to get lost in the Library of Babel — in part, this is by design. 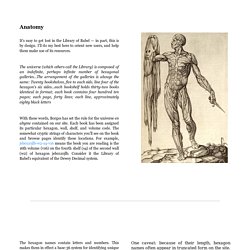 I’ll do my best here to orient new users, and help them make use of its resources. The universe (which others call the Library) is composed of an indefinite, perhaps infinite number of hexagonal galleries…The arrangement of the galleries is always the same: Twenty bookshelves, five to each side, line four of the hexagon's six sides…each bookshelf holds thirty-two books identical in format; each book contains four hundred ten pages; each page, forty lines; each line, approximately eighty black letters With these words, Borges has set the rule for the universe en abyme contained on our site.

Each book has been assigned its particular hexagon, wall, shelf, and volume code. The somewhat cryptic strings of characters you’ll see on the book and browse pages identify these locations. The hexagon names contain letters and numbers. Theory - Why Hexagons 1. The first paragraph of Borges’ “The Library of Babel” offers a minute description of the universe he has doomed his librarians to inhabit. 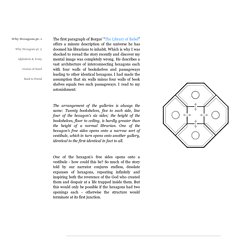 Which is why I was shocked to reread the story recently and discover my mental image was completely wrong. He describes a vast architecture of interconnecting hexagons each with four walls of bookshelves and passageways leading to other identical hexagons. I had made the assumption that six walls minus four walls of book shelves equals two such passageways. I read to my astonishment: The Book of Sand. Inside Jobs. The books and manuscripts were disappearing from a room no one seemed to be entering. 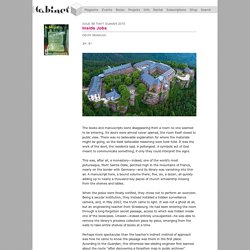 Its doors were almost never opened, the room itself closed to public view. There was no believable explanation for where the materials might be going, so the least believable reasoning soon took hold. It was the work of the devil, the residents said. A poltergeist. A symbolic act of God meant to communicate something, if only they could interpret the signs. Jean-Francois Rauzier. Hyperphotos by Jean-François Rauzier. Paris-based photographer Jean-François Rauzier's images are approximately 10,000 times the resolution of a normal photograph. 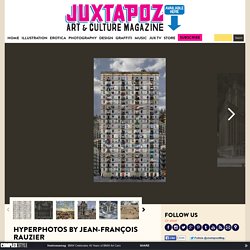 The image remains extremely crisp even when blown up to 66 feet wide (two school buses). Rauzier began his career as a fashion photographer but had always longed to break out of the constraints of the industry. Realizing he could use digital photography to compose a grid of pictures, the artist went on to create these incredibly detailed panoramas. We recommend checking out the special image viewer on his website to zoom-in and fully experience the photos. all images courtesy the artist. via. The Mystery to a Solution: Poe, Borges, and the Analytic Detective Story - John T. Irwin.

BIBLIOTHEQUES IDEALES. The Book of Soyga - Electronic version by Mariano Tomatis. Soyga: the book that kills - "Blog of Wonders" by Mariano Tomatis. There is a book which is a faithful representation of the Universe.Borges would have loved its story. 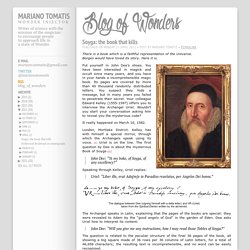 Here it is. Put yourself in John Dee’s shoes. You have been interested in magick and occult since many years, and you have in your hands a incomprehensible magic book. Its pages are covered by more than 40 thousand randomly distributed letters. You suspect they hide a message, but in many years you failed to penetrate their secret. It really happened on March 10, 1582. London, Mortlake District. John Dee: “Ys my boke, of Soyga, of any excellency?” Speaking through Kelley, Uriel replies: Uriel: “Liber ille, erat Ada[m]e in Paradiso reuelatus, per Angelos Dei bonos.” The dialogue between Dee (signing himself with a delta letter) and VR (Uriel)taken from the Spiritual Diaries written by the alchemist. Digital Bodleian.