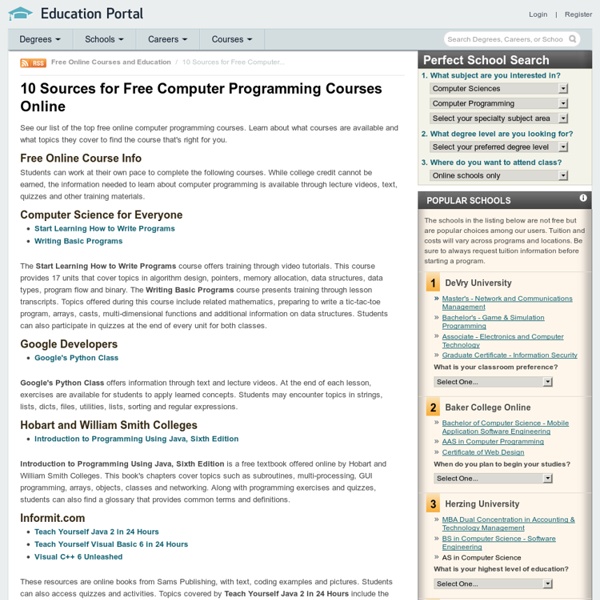 See our list of the top free online computer programming courses. Learn about what courses are available and what topics they cover to find the course that's right for you. Free Online Course Info Students can work at their own pace to complete the following courses. While college credit cannot be earned, the information needed to learn about computer programming is available through lecture videos, text, quizzes and other training materials. Computer Science for Everyone The Start Learning How to Write Programs course offers training through video tutorials. Google Developers Google's Python Class Google's Python Class offers information through text and lecture videos. Hobart and William Smith Colleges Introduction to Programming Using Java, Sixth Edition Introduction to Programming Using Java, Sixth Edition is a free textbook offered online by Hobart and William Smith Colleges. Informit.com These resources are online books from Sams Publishing, with text, coding examples and pictures. Related:  Library

No Time For The Gym? Do These Effective Desk Stretches Instead Not everyone has time to go to the gym or squeeze in a short run. Especially those who work tedious hours with long commutes. In order to maintain one’s health, creativity is required. Although the office may seem like the worst place to exercise, it actually is a great place to start. Using a desk for leverage, powerful stretches can be performed. When your schedule starts clearing out, then it’s time to go back to running outside of the office and working out in the gym. 17 Desk Stretches That You Should Try {Infographic} | Best Infographics Electrical Engineering and Computer Science | 6.00 Introduction to Computer Science and Programming, Fall 2008 | Video Lectures

3 Things You Didn’t Know About Microsoft Excel Are you utilizing Microsoft Excel to its fullest? Here are three things you might not have known Excel could do: Sparklines With Sparklines in Excel 2013, you are able to provide a more in-depth view of the data other than just simply using the numbers. Use Sparklines to show trends such as increases and decreases or economic cycles. Learn how to create Sparklines Pivot Charts Pivot Charts allow you to provide a picture for the data in your Pivot Table. Use Pivot Charts to help better explain data to your intended audience. By using conditional formatting, you are able to apply cell formatting based on specific conditions or criteria. Ready to explore all the features of Excel from beginner to advanced? Don't have access to Atomic Learning? This article is a part of Atomic Learning’s 12 Days of Learning. <div class="disqus-noscript"><a href="

National Culture About the research Professor Geert Hofstede conducted one of the most comprehensive studies of how values in the workplace are influenced by culture. He analysed a large database of employee value scores collected within IBM between 1967 and 1973. The data covered more than 70 countries, from which Hofstede first used the 40 countries with the largest groups of respondents and afterwards extended the analysis to 50 countries and 3 regions. Subsequent studies validating the earlier results include such respondent groups as commercial airline pilots and students in 23 countries, civil service managers in 14 counties, 'up-market' consumers in 15 countries and 'elites' in 19 countries. In the 2010 edition of the book Cultures and Organizations: Software of the Mind, scores on the dimensions are listed for 76 countries, partly based on replications and extensions of the IBM study on different international populations and by different scholars. Culture only exists by comparison More information

The 4Ss of Note-Taking With Technology Recently, a number of articles have surfaced reporting the ineffectiveness of note taking with laptops, in keeping with the findings of Pam Mueller and Daniel Oppenheimer detailed in The Pen Is Mightier Than the Keyboard. These authors assert that when students used laptops in lecture courses, they transcribed notes rather than synthesized information. As a result, those students then performed poorly on cognitively demanding tasks. However, before making a blanket statement that one device may be better than another (e.g. pen vs. laptop) or calling into question what may be the best note-taking system, what if we approach the concept by identifying what is best for individual students? Adequately support the students' learning needs? Support What if, because of individual learning styles, pen and paper are a detriment to learning? 1. By typing content, students have the option of hearing it played back through text-to-speech. 2. 3. Save I once had a wonderful advisee. Find his planner.