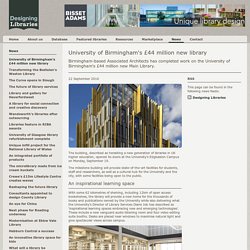 The milestone building will provide state-of-the-art facilities for students, staff and researchers, as well as a cultural hub for the University and the city, with some facilities being open to the public. An inspirational learning space With some 62 kilometres of shelving, including 12km of open access bookshelves, the library will provide a new home for the thousands of books and publications owned by the University while also delivering what the University’s Director of Library Services Diane Job has described as ‘inspirational learning spaces embracing new and emerging technologies’. These include a new vanguard audio listening room and four video editing suite booths. University library in Tokyo may be world’s coolest with its “floating” meeting rooms【Pics】 Glass-domed rooms grace five-story atrium. 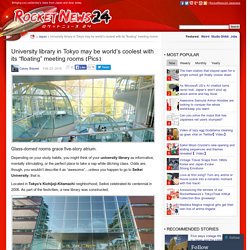 Depending on your study habits, you might think of your university library as informative, mentally stimulating, or the perfect place to take a nap while ditching class. Odds are, though, you wouldn’t describe it as “awesome”…unless you happen to go to Seikei University, that is. Located in Tokyo’s Kichijoji-Kitamachi neighborhood, Seikei celebrated its centennial in 2006. Episode 98: Geelong Library – ARM Architecture. Kengo Kuma's first Australian project. Japanese architecture practice Kengo Kuma and Associates will design its first Australian project, as part of the New South Wales government’s $3.4 billion redevelopment of Darling Harbour. 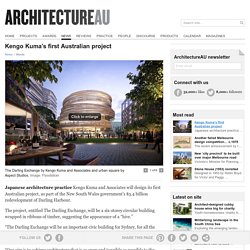 The project, entitled The Darling Exchange, will be a six-storey circular building wrapped in ribbons of timber, suggesting the appearance of a “hive.” “The Darling Exchange will be an important civic building for Sydney, for all the public to enjoy. It will become a new community hub that people in the city can be proud of,” Kengo Kuma said. “Our aim is to achieve architecture that is as open and tangible as possible to the community. This is reflected in the circular geometry, which creates a building that is accessible and recognizable from multiple directions. Toyo Ito Libraries in Japan and Taiwan. With the proliferation of digital data, the private laptop has been taking a toll on the public library. 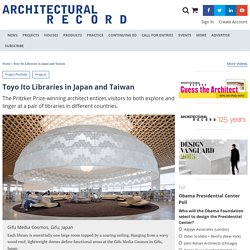 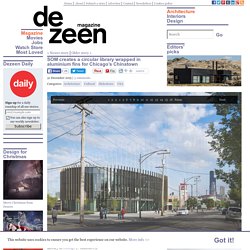 Encompassing 16,000 square feet (1,490 square metres), the new library is located in Chicago's Near South Side, on an urban site near a busy intersection and elevated metro station. "The building sits at the key intersection of South Archer Avenue and South Wentworth Avenue – the nexus of Chicago's historic southern and emerging northern Chinatown neighbourhoods," the firm said. The two-storey building's circular form was inspired by the layout of neighbouring roads and Feng Shui, an ancient Chinese philosophical system that is focused on spatial arrangements and the flow of energy. Sydney architects win accolade in Bulgarian library competition. Estudio Beldarrain extends Spanish library with railway sleepers. Railway sleepers form the walls of this extension to a library in Azkoitia, Spain, which is located at the town's former railway station. 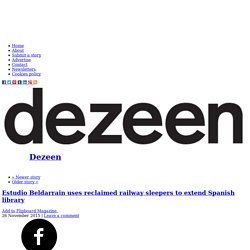 Designed by Spanish studio Estudio Beldarrain, the Aizkibel Library extension adjoins the old station building, which had already been converted into a library but was in need of more space. The disused railway track had been cleared away from the site, leaving the old building out of context. So Estudio Beldarrain used recycled sleepers to create a contemporary extension that references the site's history. The extension takes the form of a group of small tower blocks – a shape dictated by the design of the spaces within.

Italian studio Gianluca Gelmini took a similar approach for a copper-clad stairwell to a library housed in a medieval tower. Award-winning Teen Zone welcomes young library patrons in East Liberty. Teens want their space, and the Carnegie Library of Pittsburgh is happy to give it to them. 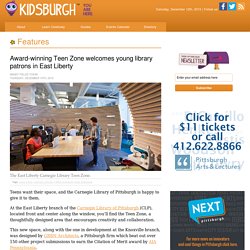 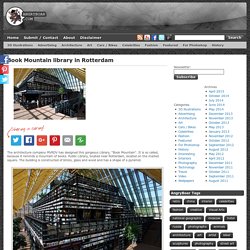 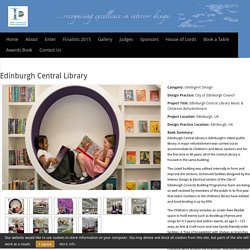 The Most Playful Libraries in the World. Architect Moon Hoon designed the Panorama House in South Korea, which features a multi-functional library. 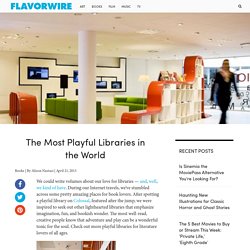 A wooden slide (used by the adults in the home, too!) Is flanked by stair step bookcases. Calgary’s New Central Library. Library by Design, Fall 2015. New Landmark Libraries 2015 Winner. A Modern Temple of Learning San Diego Central Library | San Diego Public LibraryARCHITECT: Rob Wellington Quigley, FAIA/Tucker Sadler Architects Vitals. The evolving library. With the rise of Amazon and the Kindle for reading novels, the ease of downloading movies on demand and most reference questions answered in mere seconds by Google, the concept of the library, at least as we have known it, seems somewhat archaic. By 2018, ebooks are on course to outsell printed editions in the United Kingdom, with the consumer ebook market forecast to almost triple from £380 million to £1 billion over the next four years.

Alongside publishers and librarians, architects are amongst the people most concerned about how these rapid changes will play out. Designing a library for today’s technologically-savvy world is not easy. Flexibility of function and space is perhaps key: varied, efficient spaces that are multi-functional and adaptable. A library is almost like a home away from home, it must include spaces that create community as well as where one can find solitary retreat. Designing Libraries - Library Design Showcase 2015. 2015 Library Design Showcase. Welcome to the 2015 Library Design Showcase, American Libraries’ annual celebration of new and renovated libraries. These are shining examples of innovative architecture that address user needs in unique, interesting, and effective ways. New construction dominated this year’s submissions, but renovated and repurposed spaces were a close second, showing how today’s libraries are both conserving existing resources and adapting to economic realities.