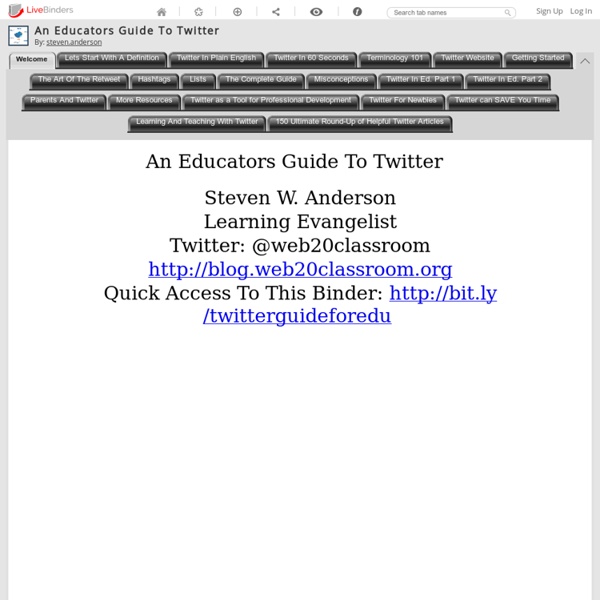 EDTEC 470 - Using Twitter to Learn from Others San Diego State University • Spring 2012 Reading RSS feeds is a great way to keep up with what's happening. But there's another technology that provides a different, more spontaneous window into the minds of other people. It's called Twitter and it's one of the fastest growing Web 2.0 technologies. Watch a video explaining what Twitter is. Get yourself an account on Twitter. and perhaps some news bots and celebrities: CA Quake | SDSU News Team | NBC San Diego | Rachel Maddow | Wil Wheaton | Martha Stewart | Emeril And then watch Jon Stewart shake his fist at Twitter. If the shoe fits, read David Wetzel's How to Use Twitter to Stay Informed About Math and Science. Finally, consider adding some twitter lists. History | Literature | NYT Book Reviews | Biology | Physics | Music | How This Fits Into Your Personal Learning System Assignment

Twitter as a Metacognitive Support Device by Alan Reid “If student satisfaction, engagement, and metacognitive awareness are all part of your definition of a successful course, then Twitter may be an option for you.” Integrating social media into academia is not a novel idea. And since you are reading this, chances are you probably have been utilizing some feature of social media in the classroom for years. What is more interesting is asking why academia should exploit social media and, more specifically, Twitter. Some learners are effective at self-regulation; that is, they guide their learning through metacognition – thinking about their own learning – and through strategic action and evaluation of their own progress. Increasing metacognitive awareness (knowing what you know, and what you don’t know) is critical for better self-regulation. What is a metacognitive support device? In a paper written in 2000, Ward Cates delineates two types of metacognitive support: static/directive support and dynamic/interactive support. Four types of tweets

Top 100 Tools for the Twittering Teacher Posted on Thursday April 2, 2009 by Staff Writers By Donna Scott Twitter has become a powerful tool for community organizers, marketers, and others who want to share and receive information in a fast, friendly environment. It’s no wonder, then, that some of the best online colleges teachers have also found success on Twitter, using the tool to connect with students, share information with parents, and find useful resources. Note: We’ve updated this list for 2012 with even more useful, up-to-date tools for savvy educators. Managing Twitter These tools will help make managing your Twitter account just a bit easier. Finding Friends Connect with other teachers, people in your local community, and more by finding followers through these tools. Sharing Make Twitter a sharing tool for photos, video, and more with these resources. Games These tools offer a way for you and your students to learn through Twitter gaming. News & Research

GroupTweet | Helping groups communicate privately via Twitter - Twitter Groups are here! How to Maximize Your New Twitter Profile Twitter is starting to look a bit like Facebook. Twitter changed their account profiles so you can visually tell the story of your business. With a little thought and planning, you can now create a Twitter page that performs like a business welcome page for existing and potential customers. And you can instantly publish your story to desktop and mobile Twitter users. What’s New With Twitter Twitter recently announced changes to Twitter account profiles and headers. New profile header images. The new Twitter header profile for the Today Show visible on the web and across all mobile devices. While the changes may seem small on the surface, together they represent a shift in the focus and future direction for this important social media tool. You have a little time to figure out how you want to use the new profile headers. Here’s how to take advantage of the new Twitter features to build an exciting visual presence on your existing Twitter account. Header Image Anatomy Your Header Image Strategy

Twitter Chats in Education If you’re on Twitter, you may have come across hashtags or people talking about participating in chats. Twitter chats in education are popular because they give educators an easy way to participate in a community around a specific topic that matters to them. Twitter chats can happen on any topic, but today I’m going to talk about some education-specific chats coming up. What is a Twitter chat? A Twitter chat is a public conversation on Twitter around a specific topic using a hashtag. Chats usually have a designated start and stop time and are often recur weekly or monthly. How do I participate in a Twitter chat? Simple. When the time comes for the chat to start, there are several ways you can monitor and participate: Use a free service like TweetChat.com or the chat tool on HashTags.orgSet up a search column in your Twitter client (check out TweetDeck or HootSuite)Follow right from Twitter.com by searching for the hashtag Are there any upcoming chats I can check out? So glad you asked!

Twitter improves student learning? Researchers at Michigan State University are exploring the use of Twitter in the classroom. The study suggests Twitter will change the way people communicate in the classroom. Christine Greenhow, Assistant Professor of Education at MSU, conducted the research and says students are much more engaged when they are actively tweeting with the teacher and classmates and others outside of class. “Some of the time this engagement took the form of them tweeting out to the authors they were reading and sharing some insights on what they read. So really deeply engaging with the things they were reading.” “Surprisingly”, she said, “many times the writers or authors tweet back – so it’s a very different experience than just reading something by yourself or in a class.”

100 Twitter Tips For Teachers Twitter may have started off as a fun social media site for keeping up with friends and sharing updates about daily life, but it’s become much more than that for many users over the past few years as the site has evolved and grown. These days, Twitter is a powerhouse for marketing, communication, business, and even education, letting people from around the world work together, share ideas, and gain exposure. It has become a staple at many online colleges and campuses as well, leaving many academics wondering just how and if they should be using Twitter both in the classroom and in their professional lives. You have to start somewhere and these tips will help ensure that your first foray in Twitter is a great experience. Organize your Twitter. Twitter has made it simple to keep things organized and makes looking through tweets a breeze. The Internet may be a virtual Wild West but there are some unspoken rules of engagement you should know before adding your two cents into the mix. Twellow.