8 videos to help get started 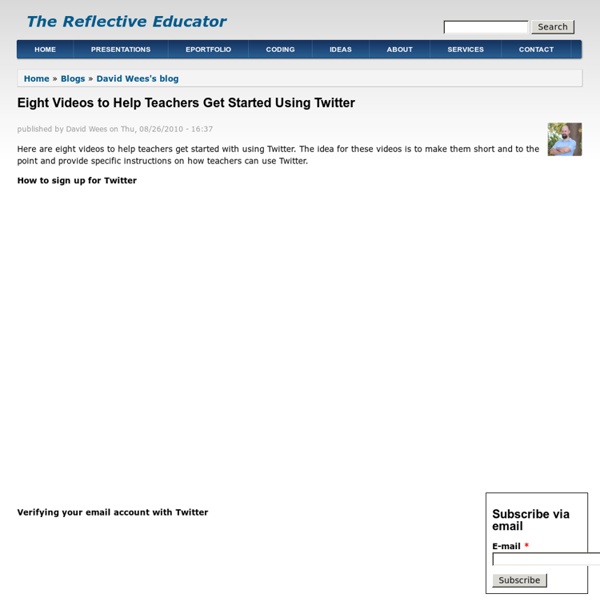 The Beginner's Guide to Twitter Update: This post was updated November 2013 to reflect current statistics and tools. Do you have a parent, friend or colleague ready to ditch his or her digital training wheels and head into Twitter's open wilderness? These pointers should get them started. And even Twitter experts might benefit from a quick refresher on the platform's valuable tools. First, the basics: What is Twitter all about? It's a platform wherein users share their thoughts, news, information and jokes in 140 characters of text or less. On Twitter, following someone is not necessarily an admission of friendship, but nonetheless affords interaction and conversation — at least in short bursts. The first step is to understand and master the vernacular. Tweet: A 140-character message.Retweet (RT): Re-sharing or giving credit to someone else's tweet.Feed: The stream of tweets you see on your homepage. Twitter has a great online glossary that you can refer back to, should you get mired in a vocab morass. 1. 2. 3. 4. 5. 6.

The Teacher's Guide To Twitter Twitter has proven itself to be an indispensable tool for educators around the globe. Whatever skill level you may be, Twitter is downright fun and worth your time. So here’s a useful guide that we curated from Edudemic’s archives in an effort to put something together that was a bit easier to read than random blog posts. We hope you enjoy and will be regularly adding to this guide so feel free to leave your ideas down in the comments or by, what else, tweeting us @edudemic anytime! Our Biggest Twitter Tips For Teachers For many teachers making a foray into the edtech world, Twitter is an excellent tool for consuming and learning. Many are also harnessing Twitter as a part of their PLN (personal learning network) to connect, share, and network. Check out our biggest Twitter tips for teachers below! Create, Don’t Just Consume The best way to get the most out of Twitter is to use it. Connect and Network Share Your Resources Keep At It Guide To Education-Oriented Twitter Hashtags Search Rule #1

40 Google Plus Tips for Newbies Ok, so at this point, we are all newbies at Google Plus, right? At least if you got in recently via a Google Plus invite. At this point I’ve spent a decent amount of time with it and have concluded that Google has finally made a positive mark in social networking. It’s still early, but there is a lot of excitement around Google+ by those who have jumped on early, and for good reason. Google has launched a social network with several features designed to leapfrog its competition. What’s evident, as more and more people start using Google’s social network, is the need for help for newer users. 40 Google Plus Tips for Newbies Last Updated August 18th, 2011: Replaced tip #22 (old) with a fresh resource on changes on Google plus. July 20, 2011: Added a video in the advanced tips section informing readers how to share a link on Google Plus as their currently isn’t an easy way for website owners to offer that option for readers. *A word about updates to this post. [/unordered_list] [/toggle]

3 tips for teachers new to Twitter SmartBlogs A colleague who knows that Twitter is my favorite social space stuck her head in my room the other day with a complaint. “Bill, Twitter’s not working for me. No one ever replies to any of my questions. What’s the point of posting if no one is ever listening?” Sounds familiar, doesn’t it? Anyone who has taken the digital leap into the Twitterstream has felt lost and unloved at some point in their early work to use the short messaging service as a learning tool. To convince similarly frustrated peers to give Twitter another chance, I always offer three bits of advice: 1. Educators have embraced hashtags — unique identifiers that start with the # sign — as a way to efficiently share information with each other. Following the hash-tagged resources that are filtered and sorted by other teachers will make the early time that you spend in Twitter worthwhile — and if the early time that you spend in Twitter is worthwhile, you’ll be more likely to continue tinkering with the service. 2. 3.

Helping Educators Get Started With Twitter PLN: Your Personal Learning Network Made Easy | Once a Teacher.... What is a PLN? If I had to define what a ‘Personal Learning Network’ is, I would keep it simple and broad: n. – the entire collection of people with whom you engage and exchange information, usually online. Personal Learning Networks, or PLNs, have been around forever. Originally, they were your family and friends, maybe other educators you worked with, but as the internet and web 2.0 tools have become nearly ubiquitous, PLNs can include tons of different communities – social networking sites like Facebook, blogs, Twitter, wikis, social bookmarking tools, LinkedIn, and so many more. Basically, anyone that you interact with is apart of your PLN, whether they are social contacts, professional peers, or experts in their field. PLNs have immense value! So, why bother thinking about your PLN? Students can also reap the benefits of tapping into their PLNs. Build Your Own PLN If you’re interested in expanding your PLN, here’s a directory of some of the best web 2.0 tools: Like this: Like Loading...

Why I try to follow every teacher I can on Twitter cc licensed ( BY ) flickr photo shared by stevegarfield Tony Baldasaro wrote a blog post yesterday that is getting a lot of attention regarding why he “unfollowed 5000 people on Twitter” and how he is going back to starting over. There is a lot of powerful thoughts in his post on how we actually connect with each other in this space: As I pressed unfollow 5,000 times, I realized that I didn’t know most of the folks that I was unfollowing. Actually, it was more than that, I had no clue who these folks were. Now I don’t want to say Tony is wrong, and from my several meetings with him I can tell you he is an awesome guy, but I do want to offer a different perspective. Several years ago when I first started Twitter, I thought, like many do, that it was probably the dumbest thing ever. A year later, I was coaxed into trying it again and people blindly followed me knowing how I easily gave up on it in the first place.

The Ultimate Twitteraholic’s Guide to tweets, hashtags, and all things Twitter Most educators who learn to use Twitter effectively say they learn more from their personal learning network (PLN) on Twitter than they’ve achieved from any other forms of professional development or personal learning. Unfortunately educators often dismiss Twitter, or fail to see the value of Twitter, when they’re first introduced to Twitter. Our aim of this post is to provide all the information you need to learn how to use Twitter effectively as an educator. We regularly update this post with new information. This post was last updated Oct, 2013. Click on a link below to go to the section you want to read: About the Twitter-a-holic’s Ultimate Guide The original Twitter-a-holic’s Guide was published in July, 2010 when I’d just returned from attending a large conference overseas and realized that while a conference can make you feel really overwhelmed and alone — especially amongst the 13,000 ed tech professionals participants who attend it each year — I never felt alone. Why? Back to Top 1.

Building your PLN Skip to content Building your PLN Know it or not, you already have some sort of Personal Learning Network or PLN! It could be your colleagues, family, students, friends – whoever! But with the power of the web and online collaboration – a PLN could really grow! This series guides you step by step through the process of building your PLN. You can work through the activities in any order and at any time. Here is our guide to growing your PLN in as little as a couple of weeks! Sign Up For Free Powered by WordPress | Hosted by Edublogs | Protected by CloudFlare AddThis Sharing Sidebar Share to Facebook , Number of shares76 Share to TwitterShare to LinkedIn , Number of shares Share to EmailMore AddThis Share options , Number of shares65 Hide Show AddThis FollowShare Toggle Dock Share Close AddThisPrivacy