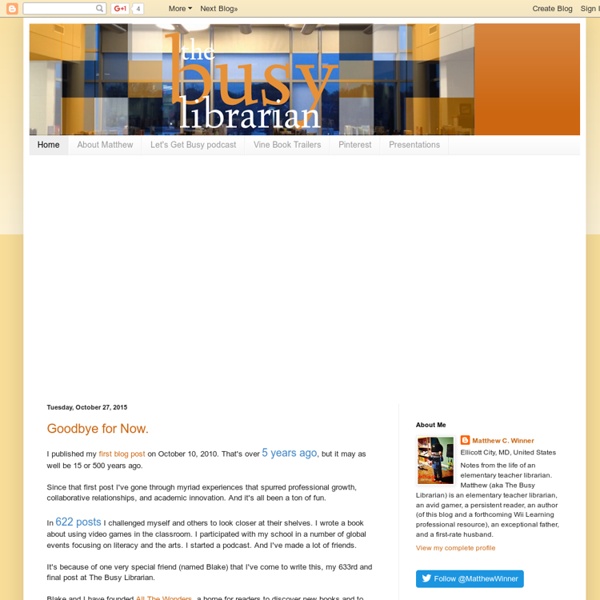 The Adventures of Library Girl The Daring Librarian The Styling Librarian | In my opinion, books are the best accessory. Collin Earl Library Advocate. Mighty Little Librarian | Librarian Tiff's Blog There’s No Such Thing as Library Leadership | Leading From the Library There’s leadership. Then there’s library leadership. Or is there? In mid-August, I delivered a webinar for Library Leadership & Management Association (LLAMA) on leadership styles. In reviewing the attendee evaluations, I came across some feedback that got me thinking. Leadership is leadership That there are many different aspects between running corporations and non-profit organizations is obvious. Studying Steve Jobs’ leadership style points to the importance of focus in making decisions and offering products. Leading in the library Can you really talk about library leadership as a unique entity? Advice from the experts In my search for an answer, I sought insights from two colleagues who have made careers out of educating librarians about leadership: Maureen Sullivan and David Bendekovic. While some pure form of library leadership may not exist, conversations about leadership with librarians require the ability to put leadership theory and practice into context.

Kid Tested, Librarian Approved I was reading through my Google Reader this morning, and came across the news that Maurice Sendak had died. I made one of those little noises, that "Oh!" of combined horror, sadness, and disbelief. Here's his obit at the New York Times. Now, the NYT doesn't exactly have a shining track record as far as children's and YA book coverage goes, but I have to give them props for this lovely obit, which acknowledges Sendak as a picture-book creator that both defined and stood outside the genre. Even now, Sendak's books have teeth that you don't often find in the picture-book shelves. He wrote a small-form picture book called Alligators All Around. We'll miss you.

Teacher Librarian IFLA -- MakerSpaces: new tradition in context Generally, a MakerSpace is considered a place where informal, collaborative learning and discovery take place through hands on creation, via use of any combination of art and technology. MakerSpaces facilitate both analog (low-tech) and digital (high tech) creation. Teen library programming and services that include use of a MakerSpace or equipment associated with a MakerSpace provide 21st century skills that contribute to new forms of literacy which include exposure to various types of technology, problem solving and collaboration skills. Much of the literature on the maker movement offers practical guides for design and implementation of MakerSpaces, including tools, technology, projects, and kits, as well as advice for libraries in the beginning stages of planning the physical layout of a MakerSpace. Why do libraries have MakerSpaces for teens? Value added approach to technology through MakerSpaces Teen Experiences – Not Adult Agendas user driven peer directed They should NOT be: