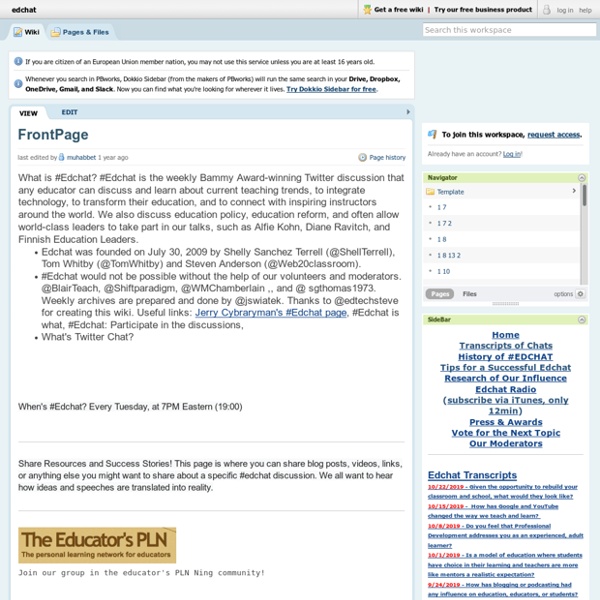 #Edchat is the weekly Bammy Award winning Twitter conversation that any educator can join to discuss and learn about current teaching trends, how to integrate technology, transform their teaching, and connect with inspiring educators worldwide. We also discuss education policy, education reform and often have leaders worldwide join our conversations, such as Alfie Kohn, Diane Ravitch, and the Finnish Education Leaders. #Edchat was founded July 30, 2009 by Shelly Sanchez Terrell (@ShellTerrell), Tom Whitby (@TomWhitby), and Steven Anderson (@Web20classroom).#Edchat is possible with the help of our volunteers & moderators- @Cybraryman1, @BlairTeach, @JSwiatek (our archivist), @KylePace, @EdtechSteve (creator of this wiki) Helpful links: Jerry Cybrarman's #Edchat page, What is #Edchat and #Edchat: Join the Conversation When is #Edchat? Every Tuesday we host 2 Edchat conversations at 12pm NYC/ 5pm UK and 7pm NYC/ 12am UK.

A Simple Guide on The Use of Hashtag for Teachers Chris Messana was the first guy to share a tweet containing a hashtag back on August of 2008. Since then, hashtags have become the most popular communicational medium of choice for television shows, political campaigns, educational news and updates, commercials, and also an icon of the 21st century pop culture. So, what is a hashtag ? Here is what Twitter said about it : " The # symbol, called a hashtag, is used to mark keywords or topics in a Tweet. Hashtags are a great way to build community around content." Who can use Hashtags?

5 Steps Toward Hootsuite Twitter Search Mastery « LaRon Carter ' Hootsuite is my social media client of choice. Our relationship was began the day my Apple Power Book G4 wouldn’t properly install the Adobe AIR needed to run Tweetdeck and I haven’t looked back since. Hootsuite is also getting a lot of buzz from iPhone users for being the current client application of choice for integrating multiple accounts with ease and flexibility. Social Media: PLN 7.2 In my blog Social Media: PLN 7.0 and 7.1 I shared a few simple, but valuable tips for jumping into the wave of social media PLN’s (personal learning network). This blog post gets specific with identifying a few subgroups that have been making buzz in the K12 education online community and walking you through a less stressed entrance into their space.

2013 STEMx Conference Welcome! Welcome to the Global 2013 STEMx Education Conference, the world’s first massively open online conference for educators focusing on Science, Technology, Engineering, Math, and more. The conference will be held over the course of three days, September 19 - 21, 2013, and will be free to attend! STEMxCon will be a highly inclusive and engaging event that will encourage primary, secondary, and tertiary (K-16) students and educators around the world to share and learn about innovative approaches to STEMx learning and teaching. A call for presentations will be issued the week of May 20, 2013. Register as a member of this conference network to be kept informed!

Can Technology Transform Education Before It’s Too Late? Editor’s Note: This guest post was written by Prerna Gupta, who is CEO of Khush (now part of Smule), whose music apps, like Songify and LaDiDa, have been used to create over 125 million songs worldwide. You can follow her @prernagupta. As technology continues its march toward the Singularity, transforming the way we work, socialize and play at an increasing rate, there is one very important aspect of American society that lags behind: education. Many in Silicon Valley have strong opinions on how education should be improved, perhaps most notably Peter Thiel, who believes we are in a higher education bubble and should be encouraging kids to skip college and pursue entrepreneurship instead.

Quandary Home Page Quandary is an application for creating Web-based Action Mazes. An Action Maze is a kind of interactive case-study; the user is presented with a situation, and a number of choices as to a course of action to deal with it. On choosing one of the options, the resulting situation is then presented, again with a set of options. Teachers Teaching Teachers, on Twitter: Q. and A. on 'Edchats' A screenshot from TweetDeck showing, left, a recent #Edchat stream and, right, the #Engchat stream at the same time. Like other groups with shared interests, from epidemiologists to James Joyce fans to locked-out N.F.L. players, teachers are turning to Twitter to collaborate, share resources and offer each other support. Many, in fact, are using it to take professional development into their own hands, 140 characters at a time. Each week, thousands of teachers participate in scheduled Twitter “chats” around a particular subject area or type of student. Math teachers meet on Mondays, for instance, while science discussions happen on Tuesdays, new teachers gather on Wednesdays and teachers working with sixth graders meet Thursdays.

Horton Hears a Tweet (EDUCAUSE Quarterly By Joanna C. Dunlap and Patrick R. Lowenthal Learning takes place in a social context, and encouraging student-student and student-faculty contact and interaction gets at the heart of student engagement in online-education settings. Because of their fundamental reliance on social participation and contribution, Web 2.0 tools, specifically social-networking tools, have great potential for enhancing the social context in support of learning, especially in online education.

Virtual Education Conferences We all know about conferences, don’t we? You fly or drive out of town and stay in a large hotel for a couple of days, eating complimentary continental breakfasts and ambling from room to identical room in search of a few fresh angles on your profession and its challenges. Conferences can be a standard part of the job for a fair percentage of educators and administrators, but some people tend to find themselves in the unfortunate position of missing a conference, workshop or other sort of professional development event for lack of available funding or enough time away from work to allow for travel. Those days, though, may be over. 2011 Lesson #5 Make teamwork, collaboration and relationship building a habit The separated classroom with separate teacher model taken to the extreme - it has to change. We are no longer educating children to work in production lines - and in the developing world, this model would be a major factor in the 80-90% post school unemployment rate in many countries, simply because students have not been taught job creation skills. Earlier this year I looked at defining the ‘old paradigm’ classroom as compared with a new ‘learning community’ model. What was immediately apparent was the emphasis that is given to ‘separation’ in the one teacher, one classroom model.