SavingStar - Cash Back On Your Groceries And Online Shopping 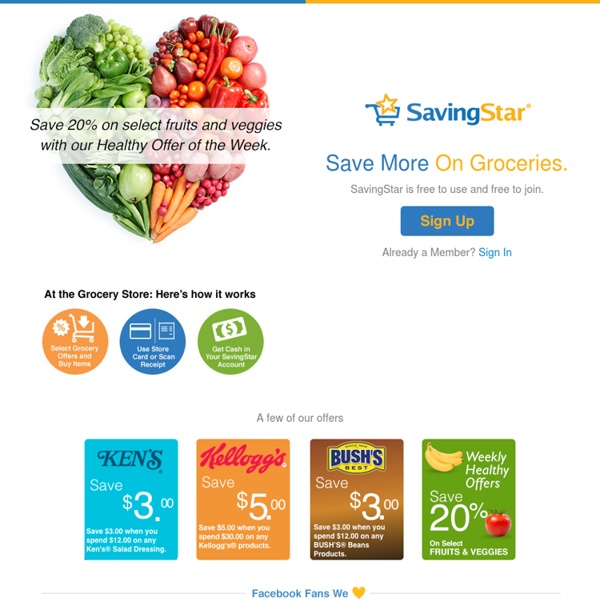 Products - Foodie.fm International Delight: International Delight Coffee Creamer - Flavor Your World How to Get Coupons Without a Newspaper | Frugal Skills I’ve been couponing for many years, but I haven’t purchased a newspaper once during that period. There are usually only a handful of coupons per newspaper that I’m interested in, and that’s often not enough savings to justify the expense of a Sunday newspaper. Here are a few methods I’ve used over the years to get coupons without paying for a newspaper. Print coupons off the internet. Hundreds of coupons are available for print off of the internet. Bonus tip : If you are still interested in buying a newspaper for the coupons, then check your local dollar store for the Sunday paper as they often sell them cheaper than the advertised price.

Register | Free Lotto for Powerball, MegaMillions and Super Lotto | My Free Lottery Pool Welcome to MyFreeLotteryPool.Com, the World's First and Largest 100% Free Online Lottery Pool! We're serious about playing the lottery. In fact, we host nearly 20 free lottery pools every month and post in excess of $350 dollars of genuine Powerball, Megamillions and SuperLotto tickets. Very Important: We're only accepting Gmail and Yahoo email accounts. Make sure to check your bulk email folder if you do not receive your confirmation link in a few minutes. If you have any problems signing up, please email: Captaindano@FreeLotteryPool.Com and we'll confirm your membership for you. Click below to sign up and Good Luck To All Of US! Click to Create Your Account Welcome New Member To MyFreeLotteryPool.Com! A Membership Confirmation Link Has Been Sent To Your Inbox. Simply click on the link to confirm your membership. Thank you for joining and Good Luck To All Of US! Captain Dano!

Augmented Reality App Instantly Translates Foreign Text On Signs, Menus If you ever wanted to be able to read text on a street sign or on a menu in a restaurant when abroad, your smartphone might be able to help you soon. Japanese electronics company Omron has developed a smartphone application that can instantly translate (short) foreign texts you come across – firing up the app and pointing the phone’s camera at the text in question is enough. Omron says that in its current form, the app (which isn’t available yet) can handle English, Japanese, Korean, and Chinese. Translations are superimposed over the text shown on the display (in the picture below, you can see three items on a Korean menu shown in yellow Japanese letters). Users aren’t required to take pictures, as translations are delivered based on live images. Japanese business daily The Nikkei is reporting that the company hopes the app will be pre-installed on smartphones released within 2012.

Zaycon Foods - How Smart Families Buy Big & Save Big Olo Online Shopping for Electronics, Apparel, Computers, Books, DVDs & more ZipList: Free Shopping List App That Makes Your Life Easier Farmigo: Tapping Into The Power Of The Web To Bring You Fresh Veggies It’s no secret that fresh produce straight from the farm can often beat the potato skins off of its supermarket counterpart — and why farmer’s markets are becoming increasingly popular. But unless you set aside that chunk of time every weekend to pick up your veggies from local growers, you’re probably stopping by your supermarket anyway. The solution to this has been the emergence of Community Supported Agriculture programs, where members of the community agree with farmers to purchase a certain amount of produce, and then pick that food up at local dropoff points at regular intervals. But, while they’ve been around for decades, these programs aren’t necessarily easy to find or use. If only we could use technology to make things a bit more efficient… Today, a service called Farmigo is launching as part of the TechCrunch Disrupt Battlefield, and it’s looking to make these CSAs more accessible, more popular, and more efficient — disrupting the way you set about buying your produce.

Crowdtap Raises $7 Million To Help Brands Connect With Their Influential Customers Crowdtap, a service that allows marketers to easily collaborate with and mobilize targeted crowds of influential consumers, announced today that it has raised $7 million in series A funding. The round was led by Foundry Group, with participation from GSA Venture Partners and social media agency Mr. Youth. Mr. Youth invested $3 million of seed funding in Crowdtap back in 2009 (and served as an incubator for the company during its early stages), which brings the startup’s total current investment to $10 million. Crowdtap said that it will use its infusion of capital to ramp up hiring in both its sales and engineering teams. With an ever-widening gulf between consumers and brands, Crowdtap is attempting to retool marketing to make it a more collaborative and participatory process. Leveraging existing customer bases, along with locating potential new customers, is no easy feat for brands. For more on Crowdtap, check out the video below: