Restaurant Scams* How some servers and bartenders SCAM!

10 Things You Didn't Know About Disneyland. Jennifer Walker » Grammar Help: Me, Myself, or I? Deciding whether to use me, myself or I in a sentence is one of the most common grammar mistakes people make. 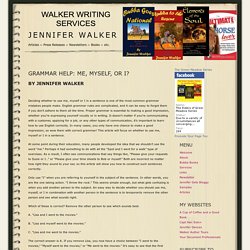 English grammar rules are complicated, and it can be easy to forget them if you don’t adhere to them all the time. Proper grammar is essential to making a good impression, whether you’re expressing yourself vocally or in writing. It doesn’t matter if you’re communicating with a customer, applying for a job, or any other types of communication, it’s important to learn how to use English correctly. In many cases, you only have one chance to make a good impression, so wow them with correct grammar! This article will focus on whether to use me, myself or I in a sentence. At some point during their education, many people developed the idea that we shouldn’t use the word “me.” Only use “I” when you are referring to yourself in the subject of the sentence. Which of these is correct? A. B. C. The correct answer is A. A. B. C. 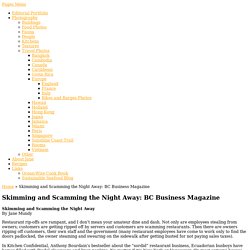 Not only are employees stealing from owners; customers are getting ripped off by servers and customers are scamming restaurants. Then there are owners ripping off customers, their own staff and the government (many restaurant employees have come to work only to find the doors padlocked, the owner steaming and swearing on the sidewalk after getting busted for not paying sales taxes). In Kitchen Confidential, Anthony Bourdain’s bestseller about the “sordid” restaurant business, Ecuadorian busboys have homes filled with Riedel glassware and linen napkins. No matter if it’s New York or Vancouver, “In most servers’ houses, you will find beautiful crystal glasses and silver coffee sets,” says Andrew Morrison, a waiter for 17 years. Chances are that once Kinninmont has been called in, something is amiss, often thousands of dollars. But servers are just as guilty.

Skimming and Scamming the Night Away: BC Business Magazine. Report a Scam. Servers made to pay 'house charge' from tips. A restaurant server has filed a complaint with B.C.'s Employment Standards Branch against a high profile Vancouver restaurant group because management required her to hand over her tips at the end of shifts. 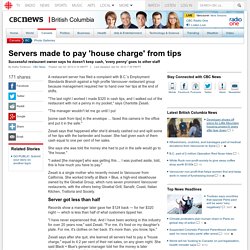 "The last night I worked I made $320 in cash tips, and I walked out of the restaurant with not a penny in my pocket," says Charlotte Zesati. "The manager wouldn't let me go until I put [some cash from tips] in the envelope … faced this camera in the office and put it in the safe. " Zesati says that happened after she'd already cashed out and split some of her tips with the bartender and busser. She says she was told the money she had to put in the safe would go to "the house. " "I asked [the manager] who was getting this ... Zesati is a single mother who recently moved to Vancouver from California. Server got less than half Records show a manager later gave her $124 back — for her $320 night — which is less than half of what customers tipped her.

"I have never experienced that. B.C. Skimming and Scamming the Night Away: BC Business Magazine. TheRestaurantExpert. What! 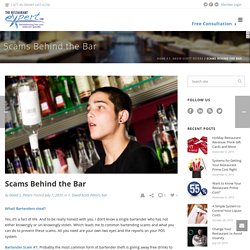 Bartenders steal? Yes, it’s a fact of life. And to be really honest with you, I don’t know a single bartender who has not either knowingly or un-knowingly stolen. Which leads me to common bartending scams and what you can do to prevent these scams. All you need are your own two eyes and the reports on your POS system. Bartender Scam #1: Probably the most common form of bartender theft is giving away free drinks to friends.

TheRestaurantExpert. AOS Group » 6 Common Restaurant Server Scams & How to Prevent Them. 12 Bartender Scams That are Costing You Profits - Blog - FOHBOH. By Ian Foster As a BEVINCO auditor, I often hear the comment that "all bartenders steal". 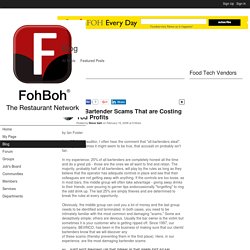 Although sometimes it might seem to be true, that accusati on probably isn't fair. In my experience, 25% of all bartenders are completely honest all the time and do a great job - those are the ones we all want to find and retain. The majority, probably half of all bartenders, will play by the rules as long as they believe that the operator has adequate controls in place and see that their colleagues are not getting away with anything. If the controls are too loose, as in most bars, this middle group will often take advantage - giving away drinks to their friends, over-pouring to garner tips andoccasionally "forgetting" to ring the odd drink up. Obviously, the middle group can cost you a lot of money and the last group needs to be identified and terminated.

. #2 - OVER-POURING FOR A BETTER TIP Most bartenders pretend that this is not really theft. The good news is that all these scams can be deterred.