Jacek's no-knead artisanal bread and Intro for February 3, 2017. Posted by Lainey 12: AMFebruary 3, 2017 Dear Gossips, Are we done talking about Beyoncé yet? 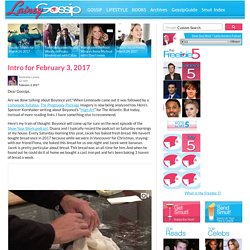 When Lemonade came out it was followed by a Lemonade Syllabus. The Pregnancy Package imagery is now being analysed too. The Best Of The Roast Collection Melbourne. There’s nothing better on a frosty winter day than to tuck into a succulent roast dinner and with Melbourne Food and Wine Festival’s annual Roast Collection in full swing this month, you won’t even need to preheat the oven. 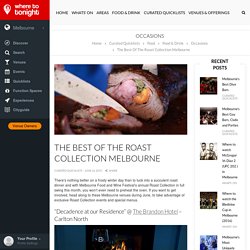 If you want to get involved, head along to these Melbourne venues during June, to take advantage of exclusive Roast Collection events and special menus. Melbourne's top five old pubs - Bars & Pubs - Time Out Melbourne. Do a pub crawl your ancestors might have done Young & Jackson's Victoria’s oldest and most famous drinking hole upgraded a few years back to include a decent café/bar area, in addition to the two central bars. 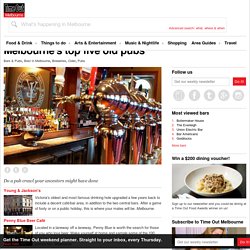 After a game of footy or on a public holiday, this is where your mates will be. Melbourne. 33 Epic Burgers Everyone In Melbourne Needs To Try At Least Once. Peonykiss. Quite a number of people emailed / whatsapp me to ask for recommendations , so i decided to make my own list. 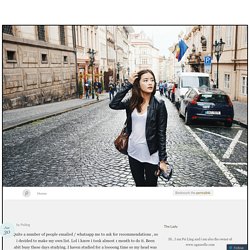 Lol i know i took almost 1 month to do it. Been abit busy these days studying. I haven studied for a loooong time so my head was so tight and packed. I realized that this blog post was drafted back in May and i only posted it today. The places from this list are the places me and my Oppa often go to. So well , here is the list and places we frequented for the past 1.5 years. 50 Meals You Should Have Eaten in 2015. Save Your Favourites "What was that bar again? 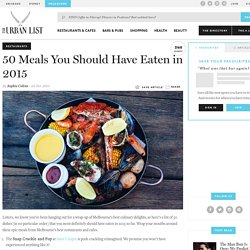 " Save all the new spots you have to try. And stories for when you have time. The 11 Best Yum Cha Restaurants in Melbourne. For those who are sadly unawares, Yum Cha is the Cantonese act involving drinking Chinese tea and eating dim sum dishes. 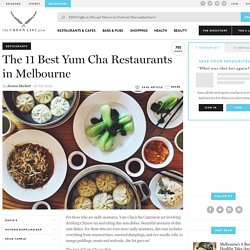 Bountiful amounts of dim sum dishes. For those who are even more sadly unawares, dim sum includes everything from steamed buns, assorted dumplings, and rice noodle rolls, to mango puddings, meats and seafoods…the list goes on! The joys of Yum Cha are that: It is a meal appropriately eaten for breakfast, brunch, morning tea, lunch, afternoon tea or dinner – any time is Yum Cha time! So without further ado, here are the 11 best Yum Cha restaurants in Melbourne. RED DOOR YUM CHA Decked out with beautiful antique furniture and adorned with traditional authentic décor, Red Door Yum Cha provides a unique dining experience taking patrons back into the heart of ancient China itself (from what we can pertain from having watched The Karate Kid at least 36 times).

A Melbourne Diner’s Guide to the Cheap and Cheerful. We’ve compiled a list of cheap and cheerful eateries that should be kept safe in your mind for times when funds are low, time is short or the kitchen cupboards are frightfully bare. 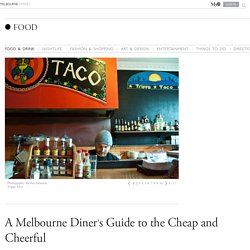 Some may shy away from a laminated neon pink menu, but along with drinking BYO wine from tumbler glasses and cramming into tightly regimented seating plans, it’s a common indicator forming the basis of an unwritten guide to cheap eats in Melbourne. Other familiar clues include fluorescent lighting, self-serve cutlery and nostalgic pictures depicting the cuisine's homeland. Tacky? Maybe, yet for all that lacks in these no-frills establishments, the habitual charm of home-style decor, authentic cooking and a laidback attitude will entice you back again and again for as little as the loose change lining your pocket. Introducing the unsung heroes of Melbourne’s culinary world: 10 places that feed us with cheap simple, food at a price that won’t leave you out of pocket. Wednesday Night Specials Melbourne - Cheap Food And Drink Specials. Seven Days of Cheap Eats in Melbourne. Eat cheap (but not poorly) seven days a week. 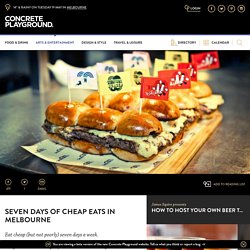 Eating out in Melbourne is arguably a Melburnian’s favourite thing to do. Even those on a budget should be able to eat at nice places. And you can! Plan your days correctly and you won’t pay more than $15 for a meal again; play the system right and you can still eat like a king (oysters included). With our guide to the best culinary bargains around town, you can eat cheap (but not poorly) seven days of the week. Monday. Best Cheap Eats in Melbourne CBD for Under $10. Image by Joya D Foodie paradise, Melbourne provides refuge to cuisines from all corners of the world. 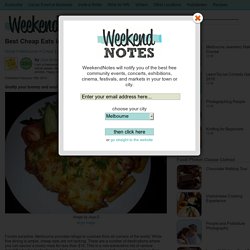 While fine dining is ample, cheap eats are not lacking. Cheap Eats: Twenty under $20 - Restaurants - Time Out Melbourne. Middle Fish There aren’t a lot of places you can get a traditional kha-nom jeen nam ya (fermented rice noodles and fish curry sauce, $14.50) partnered with a coffee for breakfast. 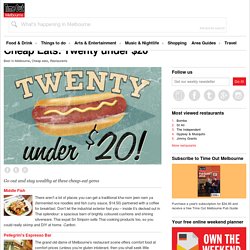 Don’t let the industrial exterior fool you – inside it’s decked out in Thai splendour: a spacious barn of brightly coloured cushions and shining silverware. Thai expat Sri Siriporn sells Thai cooking products too, so you could really skimp and DIY at home. Carlton. Melbourne's best cheap eats 2015. Simone Egger Finding good food is as good as waking up worried, only to find it's the weekend. 51 of Melbourne's Best Cheap Eats. Save Your Favourites "What was that bar again? " Save all the new spots you have to try. And stories for when you have time. Sign InJoin Save Your Articles.

15 Top Lunch Deals in Melbourne. 100 of Melbourne's Best Cheap Eats to Try in 2015. It sure is an expensive time of year, Listers, but we don’t have to tell you that! Between the obligatory office Kris Kringle, never-ending Christmas drinks and inevitable overspending on New Year’s festivities, you’re probably going to want to tighten those belts (metaphorically speaking, of course!) And hit up some frugal feasts. That’s why we’ve pulled together a list of some of the tastiest treats in town for under $10 that are sure to keep you happy and the debt collector at bay, so you can spend a little less and eat a little more. We can never say no to a good bargain, and we’ve found aplenty to bring you 100 of Melbourne’s best cheap eats to keep you going through 2015.

Kway Chap, the 2-part Teochew dish that enraptures true gourmands of the scrumptious pig, is a combination of Kway—a soy sauce broth with thin, broad rice sheets—and a freely customizable set typically containing pig innards, pig skin, hard-boiled eggs, pork belly, tau pok, tofu, and fishcake, all of which are masterfully braised in a dark sauce. If you’ve ever seen anyone grimace at your freshly prepared serving of Kway Chap, they’re probably thinking: Why in God’s name is this dolt eating unwanted pig parts?

To be fair, that is a valid concern even for the veterans, considering the rather unrefined pig intestine they refer to is the nucleus of the pig-intensive Kway Chap. Know, however, that the best Kway Chap stalls take it upon themselves to conduct a thorough colonoscopy after the intestines are disinfected by hand. 10 Best Teochew Porridge 潮洲粥 Stalls in Singapore You Have to Hunt Down Now. Written by Nick Chee An airline executive, Nick loves to eat and travel. He prefers spending more time taking photos of his meals and sharing it on Facebook & Instagram rather than eating them.

Teochew porridge, also known in colloquial dialect as ‘Teochew Mui’ 糜 to foreigners is a really strange and peculiar dish to say the least as it is nothing like the mushy rice porridge or al dente risotto in any shape or form. Neither is it gooey like the typical Asian congee. So what exactly is it? 20 Best Chicken Wings in Singapore So GOOD You Won't Mind Putting On Weight For. This post was brought to you by Pickat, a food app that gives you free coupons to redeem at restaurants all around Singapore. Download Pickat on: GooglePlay | iOS I recently read a survey which found that 98% of ardent chicken-lovers regard the wings as some of the best parts of the bird.

I count myself to be amongst this 98%. 30 Famous Local Foods To Eat In Singapore Before You Die - Seth Lui. Written by Seth Lui Chief Food Hunter. Seth doesn't promise good reviews, only honest ones. 15 Delightful Singapore Cafes with No GST & No Service Charge - Singapore Travel & Lifestyle - TheSmartLocal. We've all experienced it before. You happily go to a cafe and order your eggs benedict and artisan coffee. But when the bill comes, along with it comes a whole bunch of extra charges and you end up paying way more than expected.

Not cool. 5 best mac and cheese places in Singapore - LifestyleAsia Singapore. A childhood favourite, mac and cheese is the ideal comfort food for basically everything and anything. From nursing a hangover after a night of partying to an instant meal when you’re hungry at midnight, a good bowl of mac and cheese, whether made from scratch or taken from a Kraft box, warms the tummy and instantly brings us back to the best moments of our childhood. 5 Best Places For Waffles In Singapore. Revised on 22 January 2014 Every ice-cream/breakfast place sells Belgium waffles but not many can do a good tribute to this characteristically deep grid patterned dough-based cake. I personally enjoy my waffles served warm, crisp on the outside but light and fluffy on the inside, with those square imprinted pockets that soak up the heavenly combination of ice-cream, chocolate sauce or maple syrup and even cream. A good Belgium waffle in my opinion has to be a bit doughy, chewy, good to eat on its own but even better with toppings.

The Ultimate Guide to Salted Egg Yolk Dishes in Singapore’s. The 15 Most Mindblowing Burgers in Singapore Under $15.