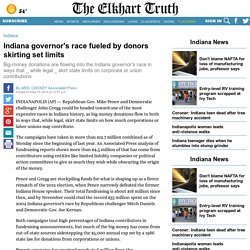 Mike Pence and Democratic challenger John Gregg could be headed toward one of the most expensive races in Indiana history, as big-money donations flow to both in ways that, while legal, skirt state limits on how much corporations or labor unions may contribute. The campaigns have taken in more than $12.7 million combined as of Monday since the beginning of last year.

An Associated Press analysis of fundraising reports shows more than $4.5 million of that has come from contributors using entities like limited liability companies or political action committees to give as much they wish while obscuring the origin of the money. Pence and Gregg are stockpiling funds for what is shaping up as a fierce rematch of the 2012 election, when Pence narrowly defeated the former Indiana House speaker. Pence’s campaign has received nearly $1.6 million from the Washington-based RGA Right Direction PAC, funded by the Republican Governors Association. Top Donors data for John Kasich, 2016 Cycle. 10 Reasons Why John Kasich Is As Rabidly Right-Wing as the Rest of the GOP Presidential Candidate Pack. Photo Credit: It’s not surprising that Ohio's twitchy Republican governor, John Kasich, who just announced his candidacy for president, was picked by Fox News for its primetime 2016 candidate debate. 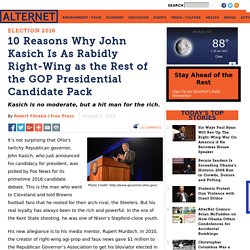 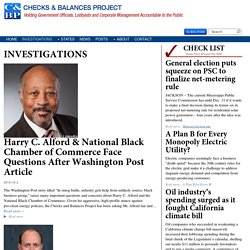 Alford and the National Black Chamber of Commerce. Given his aggressive, high-profile stance against pro-clean energy policies, the Checks and Balances Project has been asking Mr. Alford fair and… Read more » My colleague Evlondo Cooper and I just returned from a six-day fact-finding visit to Nevada, where we met with reporters and editors, civic leaders, and others. Our trip to Carson City, Reno, and Las Vegas was designed to give us a better understanding of the dynamic between the Nevada Public Utilities Commission (PUC) and the… Read more » Checks and Balances Project did something yesterday we haven’t done before: we requested records from a well-known consumer protection nonprofit.

Influence pedaling in America is a $9 billion a year industry. Skewed Justice. Resources. State Supreme Courts in the US decide 95% of cases filed and are of particular importance to most citizens because they issue rulings that impact criminal justice, voting rights, environmental justice, and reproductive rights, among others. 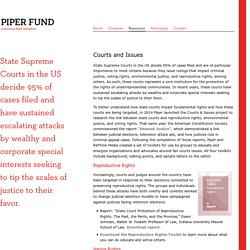 As such, these courts represent a core institution for the protection of the rights of underrepresented communities. In recent years, these courts have sustained escalating attacks by wealthy and corporate special interests seeking to tip the scales of justice to their favor. To better understand how state courts impact fundamental rights and how these courts are being targeted, in 2014 Piper launched the Courts & Issues project to research the link between state courts and reproductive rights, environmental justice, and voting rights. That same year, the American Constitution Society commissioned the report "Skewed Justice", which demonstrated a link between judicial elections, television attack ads, and how justices rule in criminal appeal cases. 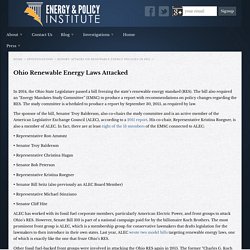 The bill also required an “Energy Mandates Study Committee” (EMSC) to produce a report with recommendations on policy changes regarding the RES. The study committee is scheduled to produce a report by September 30, 2015, as required by law. The sponsor of the bill, Senator Troy Balderson, also co-chairs the study committee and is an active member of the American Legislative Exchange Council (ALEC), according to a 2011 report. His co-chair, Representative Kristina Roegner, is also a member of ALEC. In fact, there are at least eight of the 13 members of the EMSC connected to ALEC: • Representative Ron Amstutz • Senator Troy Balderson • Representative Christina Hagan • Senator Bob Peterson • Representative Kristina Roegner • Senator Bill Seitz (also previously an ALEC Board Member) 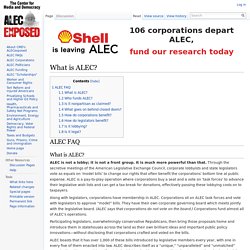 ALEC is not a lobby; it is not a front group. It is much more powerful than that. Through the secretive meetings of the American Legislative Exchange Council, corporate lobbyists and state legislators vote as equals on ‘model bills’ to change our rights that often benefit the corporations’ bottom line at public expense. ALEC is a pay-to-play operation where corporations buy a seat and a vote on ‘task forces’ to advance their legislative wish lists and can get a tax break for donations, effectively passing these lobbying costs on to taxpayers. Along with legislators, corporations have membership in ALEC. Participating legislators, overwhelmingly conservative Republicans, then bring those proposals home and introduce them in statehouses across the land as their own brilliant ideas and important public policy innovations—without disclosing that corporations crafted and voted on the bills. Because "We the People" own Congress!