There’s an outdoor bar in a bubble on the rooftop of this New York hotel, so drinkers can stay warm in winter. Inside this new restaurant in London is a copper lovers delight. Photography by Kate Berry London design studio Kinnersley Kent Design, have recently completed Bandol, a new 70-seat restaurant on Chelsea’s Hollywood Road, featuring copper, distressed oak, steel, concrete, brick, smoked glass and artful lighting, as well as a large central olive tree. 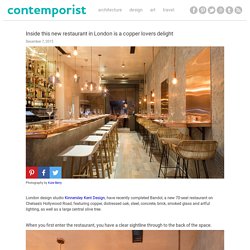 When you first enter the restaurant, you have a clear sightline through to the back of the space. When you enter the bar area of the restaurant, there are small tables along the wall. A series of four cantilevered copper panels form the small tables, and continue 1 meter (3 feet) up the wall. The cantilevered copper tables are lit by custom copper pipe pendant lights. The bar area within the restaurant is home to seating from Normann Copenhagen. The bar area is lit by a display of 24 glass pendants of varying sizes, types and lengths. It is also home to a custom copper bar top. The Plants In This Restaurant Are Herbs That The Chef Uses To Cook With. This New York City Coffee Shop Was Originally An Alleyway. Ghislaine Viñas Interior Design and UM Project have completed the design of Happy Bones NYC, a boutique coffee shop that was originally an alleyway between two existing buildings in the SoHo neighborhood of New York. 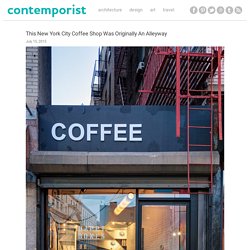 About the project Happy Bones NYC is a boutique coffee shop that re-opened from its original pop up location to its permanent home at 394 Broome St. in the Soho neighborhood of New York City. Before & After – An Old Vacant Post Office Transformed Into A Cafe. WALA (aka Weian Lim Architects) have transformed a vacant, rundown old post office into The Little Man Cafe, a bright and relaxed space in Seddon, a suburb of Melbourne, Australia. 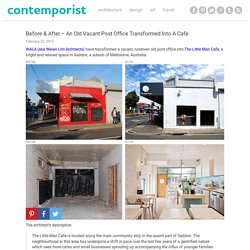 The architect’s description The Little Man Cafe is located along the main community strip in the quaint part of Seddon. A Pair Of Swinging Sofas Greet You At This Restaurant. Substance have designed the latest restaurant for the dining brand Classified, in Hong Kong. 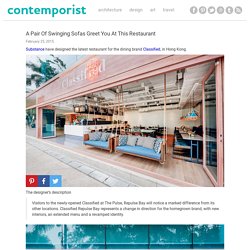 The designer’s description Visitors to the newly-opened Classified at The Pulse, Repulse Bay will notice a marked difference from its other locations. Classified Repulse Bay represents a change in direction for the homegrown brand, with new interiors, an extended menu and a revamped identity. Classified’s first outlet, which opened its doors on Hollywood Road in 2006, introduced European-style al fresco dining to Hong Kong. Offering premium artisan cheeses, gourmet coffees and boutique wines, the casual café concept expanded to nine Hong Kong neighbourhoods, including Wan Chai, Tai Hang, Stanley and Happy Valley. The new Classified in Repulse Bay, for example, incorporates elements of its seaside setting with an aqua blue palette and pillow-strewn swinging sofas for guests to enjoy the ocean views. This restaurant in Kiev is keeping it casual and natural. 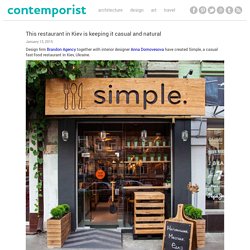 From the designers Client: Fast-food restaurant of a new generation. Kitchen is focused on simple and original food from local, seasonal ingredients.Challenge: The task was complex: in addition to the name, logo and corporate identity we had to develop an interior design. We focused on a close-knit team working with interior designer Anna Domovesova. We started at the same time, analyzing, checking and adjusting to each other’s steps and global course in general. Naming The name of the restaurant had to express its spirit and to be up-to-date: it was important not to get into farm and vegetarian themes. Guideline There was a thick guideline developed for Simple. restaurant. 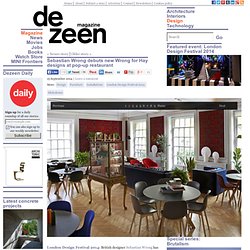 A selection of products by Danish brand Hay and Wrong for Hay have been curated by interior stylists Benjamin Kempton and Melina Keays in a Georgian townhouse in south-west London. Glassware, lighting, stationary, textiles and furniture by the brands are interspersed with planting and antique pieces in the showroom. "It's quite eclectic," said Wrong.

"I think it's very nice to allow other people to use your products to cook other foods sometimes," Wrong told Dezeen. The showroom will double as a dining space during the London Design Festival – a daytime café and an evening restaurant will serve a fusion menu of Nordic and London dishes by Helsinki-based chef Antto Melasniemi. An earthenware vase by Richard Woods has branches for spouts. Stock Coffee by Arhitektura Budjevac. Arhitektura Budjevac have recently completed a cafe named Stock Coffee in Niš, Serbia. 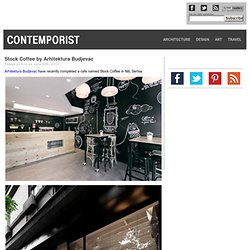 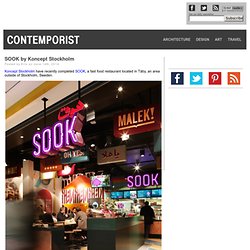 Project description SOOK is a fast food restaurant in Täby Centrum outside Stockholm with high standards of quality. It prepares food from the Middle East with a lot of love. But how do you communicate that message of care and passion to busy lunch guests? CitizenM Times Square by Concrete Architectural Associates. CitizenM Hotels have opened a new location of their distinctive accommodations designed by Concrete Architectural Associates. 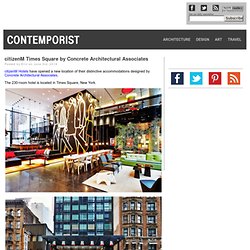 The 230-room hotel is located in Times Square, New York. Project description The concrete designed citizenM hotel is making its debut in the United States with its first skyscraper in the heart of New York City on Times Square. An Amsterdam based hotel chain, citizenM is bringing affordable luxury to all mobile citizens, as it opened its doors on 10 April, 2014.citizenM Times Square offers New York 230 of its signature guest rooms, stacked on top of a vibrant living room plaza, a double height space which combines the NY-vibe with a home away from home feel. Starbucks Flagship Store opens at Downtown Disney Orlando. 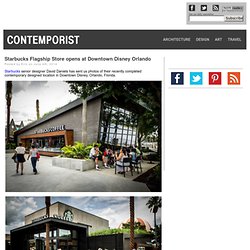 It begins with a blank piece of white paper.When Starbucks senior designer David Daniels is challenged with creating a new store, he starts sketching chairs or a table setting and thinks about all the meaningful moments that will happen in the space. “My imagination runs wild, and as I draw I think about how somebody might meet the girl of their dreams there. All sorts of things could happen there, if only the walls could speak,” said Daniels, as he looked at the original drawings for Starbucks new store in Downtown Disney West Side at Walt Disney World Resort near Orlando, Florida.The nearly 4,000 square foot store is a new page in the collaboration between two iconic brands. IO Studio references Czech porcelain inside modern beer hall. Czech office IO Studio offers a modern take on the traditional beer hall with this bar near Prague for beer brand Radegast (+ slideshow). Housed inside a converted lock factory built in the late 19th century, the bar was designed by IO Studio to be the first in a potential chain of bars for Radegast.

Architect Luka Krížek from IO Studio referenced Czech culture and hospitality in his design by adding a blue and white checked pattern on the vaulted ceiling, derived from traditional Czech Cibulák porcelain. London cafe references city's industrial past by TwistInArchitecture. The interior of this east London cafe by local firm TwistInArchitecture features copper tubes, timber boards and metal light fittings, designed to reference the area's trade history (+ slideshow). TwistInArchitecture converted a run-down space on Commercial Street in east London for a cafe called Trade, retaining three separate zones from the original layout to use for display, coffee and food preparation and customer seating.

The firm's designer and co-founder Andreja Beric said the philosophy for the build was to create a "contextually responsive environment" by re-using materials that were once traded by builder's merchants along the street. Umo Japanese Restaurant by Estudi Josep Cortina. Estudi Josep Cortina has designed the Umo Japanese Restaurant as part of Hotel Catalonia in Barcelona, Spain. Pablo & Rusty’s by Giant Design. Giant Design have completed a new Pablo & Rusty’s café in Sydney, Australia. Description from the designers: Following the success of the Giant designed Lane Cove café, Saxon Wright, was looking to take his existing boutique roaster business to the next level by opening a flagship store within the Sydney CBD The new site is grand in its location and scale; a high ceilinged corner tenancy, with full height glazing and lots of natural light.

Using the established palette of polished concrete, aged brass & zinc, warmed up with reclaimed bricks and honey toned timbers, we recreated the vintage industrial aesthetic and threw in some big-city glam, with brass mesh, a custom-made brass wire milk crate chandelier and a lush wall of living ivy. The larger site meant we could really strengthen the dedication to espresso. Padarie Cafe by CRIO Arquiteturas. Hyper-realistic renderings of a proposed cafe in the Ukraine. These hyper-realistic renderings by designer Michael Samoriz depict a cafe proposed for Ukraine with wooden beams criss-crossing over its ceiling. Mercato restaurant at Three on the Bund by Neri&Hu. Glass Farm by MVRDV night shots. When we posted a story about MVRDV's glass building printed with the image of a farmhouse, our readers wondered how it would be occupied and how the facade would look when illuminated from within.

This new set of images reveals just that (+ slideshow). Located in the market square of small Dutch town Schijndel, this shop and office complex by MVRDV is disguised as an old farmhouse from afar but is actually made of glass, printed with collages compiled from photographs of local farmhouses. Cafe in the Botanical Gardens by Kollgata Arkitektur. The Old Library by Hecker Guthrie. Restaurant Castillito by Mathias Klotz and Lillian Allen. Chilean architects Mathias Klotz and Lillian Allen have renovated a castle-like residence in Santiago's Parque Forestal to create a restaurant, exhibition space and ice-cream parlour (+ slideshow).