20 Ways To Maintain A Healthy Level of Insanity 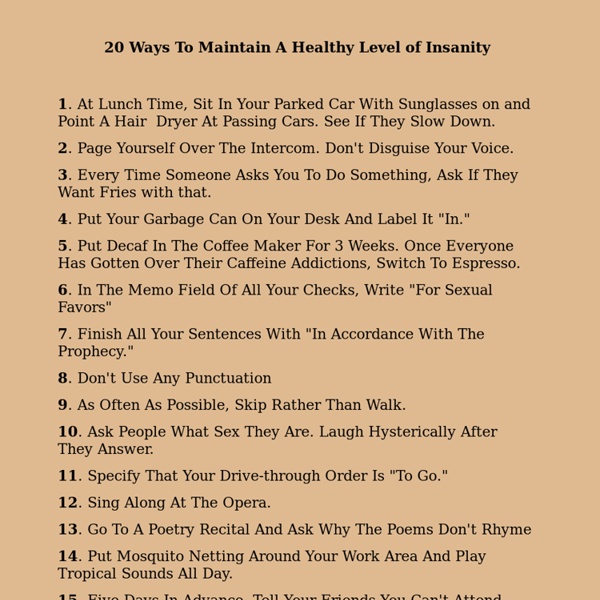 31 Quotes That Will Give You Chills I think quotes have a powerful way of conveying an attitude to you which sometimes resonates so much that you feel ‘chills’ inside. Here’s a list of the quotes which have given me the most of these “chills”. Enjoy! Some people die at 25 and aren’t buried until 75. —Benjamin FranklinMost people are other people. Their thoughts are someone else’s opinions. The Knotted Headband Tutorial My husband came home one day with a headband he had found in a parking lot (I know...sooo sanitary) and said "I bet you could make one of these" so I did...because I'm all for stealing awesome ideas. Difficulty: Medium

10 Weird and Mysterious Places on Earth - StumbleUpon digg 1. Mystery Spot Mystery Sport is a tourist attraction near Santa Cruz, California, famous because of its disrespect to the laws of physics and gravity. The odd cabin, although seems like lying on flat ground, makes those who enter inside swinging all the time. The New French Hacker-Artist Underground Thirty years ago , in the dead of night, a group of six Parisian teenagers pulled off what would prove to be a fateful theft. They met up at a small café near the Eiffel Tower to review their plans—again—before heading out into the dark. Lifting a grate from the street, they descended a ladder to a tunnel, an unlit concrete passageway carrying a cable off into the void. They followed the cable to its source: the basement of the ministry of telecommunications. Horizontal bars blocked their way, but the skinny teens all managed to wedge themselves through and ascend to the building’s ground floor. There they found three key rings in the security office and a logbook indicating that the guards were on their rounds.

50 Life Secrets and Tips Pt. 2 Investigate what is known about deathWhat do you know about death? You certainly have beliefs around it, but what do you know about the science of death, or of those who have died and been brought back to life? Death is not as big of a mystery as it is made out to be. Do your research before you fear or misconstrue this most universal human experience.Notice the small, beautiful thingsAs cliche as this sounds, there is so much beauty in the world yet we rarely appreciate it. Take 5 minutes, stop doing everything and sit down.

Adorable DIY Ear Warmers How gorgeous are these ear warmers?? I love all the different styles you can make from one tute as well. When I spied these on Delia Creates I just had to beg Delia to share the DIY with you, and lucky us, she agreed! How to Make Caramel Apple Shots Photo: Michelle Oddis Once in a while, a party trick comes along that grabs our attention. Food blogger Michelle Oddis of That's So Michelle loves making caramel apple shots we can't imagine anyone would turn down.

Tokyo's rabbit cafes hopping with customers Tokyo is full of cafes catering to a wide assortment of tastes, but in recent years a new breed of coffee house has emerged for people who love to hang out with rabbits. Ra.a.g.f, pronounced “raf,” opened last fall in the fashionable Jiyugaoka area in Meguro Ward, and is usually packed at weekends with customers reveling in the company of the cafe’s 20 to 30 rabbits. “I came here during my break to relax,” said a smiling woman in her late 20s as she fed fresh vegetables to some of the rabbits. Customers who want to buy rabbits can purchase the animals from the cafe’s breeding center — but the cafe’s rabbit “staff” are not for sale. 25 Acts of Body Language to Avoid Our body language exhibits far more information about how we feel than it is possible to articulate verbally. All of the physical gestures we make are subconsciously interpreted by others. This can work for or against us depending on the kind of body language we use. Some gestures project a very positive message, while others do nothing but set a negative tone.

braided headbands I am STILL growing my hair out and while I have surpassed the really difficult stage, it seems I am always one bad hair day away from shaving my head. I've done it before and could do it again- once you know how easy it is to have short hair or very little hair, it is SO tempting to go back. That is why having lots of hair accessories on hand is a MUST! I have a variety of ways that I like to pull my hair back and lately I've been having fun making my own braided headbands. 10 Best Sexual Drinking Games Some of the best sexual drinking games can be done either in an intimate setting with only you and your girlfriend or you can make it a party and have multiple people. The ten most commonly played sexual drinking games are: Nine cans of beer or the floor. In this game you will need about nine cans of beer per person, (NOTE: not everyone will finish this game) a shot glass and a time keeper.