How iBooks Author Stacks Up to the Competition [CHART] 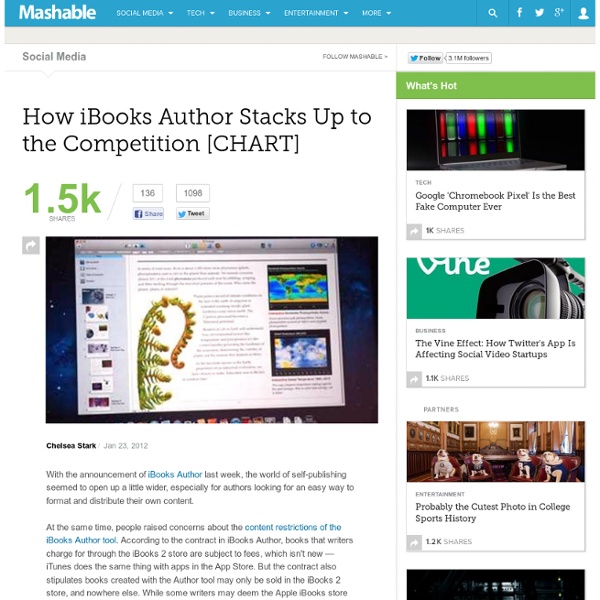 With the announcement of iBooks Author last week, the world of self-publishing seemed to open up a little wider, especially for authors looking for an easy way to format and distribute their own content. At the same time, people raised concerns about the content restrictions of the iBooks Author tool. According to the contract in iBooks Author, books that writers charge for through the iBooks 2 store are subject to fees, which isn't new — iTunes does the same thing with apps in the App Store. But the contract also stipulates books created with the Author tool may only be sold in the iBooks 2 store, and nowhere else. While some writers may deem the Apple iBooks store an adequate revenue stream, others may not welcome the regulations. Still, self-publishing holds potential for many authors, especially now that 29% of U.S. adults own some kind of tablet or ereader. Are you an ebook publisher using something that didn't make the list? Related:  Por animacions

Comment créer un fichier ePub ? "E-Book Standards" - really? In the jostle for market share in the tablet space Amazon is betting it will sell a great deal of content through the Kindle Fire as unlike its fierce competitor Apple it does not make money on its hardware sales. The disappointing financial results released by Amazon this week have caused a stir amongst publishers not to mention shareholders. How well content is selling on the Kindle Fire is largely unknown at this point, especially for publications. I am sure that most publishers would agree that the pace of innovation and change is staggering in the digital world. Amazon's Kindle format 8 (KF8) relies on a completely separate process to create a fixed layout e-book than Apple's version of fixed layout for titles that are design-led e-books. Kobo like to portray themselves as the nice guys of digital publishing and have helped publishers out by following similar specs to Apple's fixed layout EPUBs. The Nook, we think, is a well crafted device that may be heading over here.

New atlas app invites children to take the world for a spin The Barefoot World Atlas app launched this weekend, inviting children everywhere to take the world for a spin (provided they have access to an iPad, that is). The result of a collaboration between Barefoot Books and app maker Touch Press, the interactive atlas has been specially designed to take full advantage of the new iPad‘s high-resolution Retina display. As with Google Earth, the Barefoot globe can also be spun with a simple swipe, allowing children to go on journeys to far flung places. Illustrator David Dean designed the colorful atlas, adding lots of 3D images and animations in the process. “We’ve created a magical globe that children are invited to explore,” said BBC TV presenter and geographer Nick Crane, who provides audio narration for the app. He continues, “You can use the pinch zoom gesture to fly down to the surface. Buttons at the top left of the screen give the user quick access to regions, countries, features and favorites.

Downloads Windows | Mac | Linux Download the latest Jutoh release here. Until registered, it will act as a demonstration with a few limitations. You can uninstall the old version first if you wish (on Windows, from the Start menu or Control Panel). Please see Release Notes for what's new in this release. For information about migrating from Jutoh 1 to Jutoh 2 (a free upgrade), please see this topic. You can download the old Jutoh 1 version here. Jutoh for Windows Jutoh for Windows is about 10 MB in size. Windows 8 users: click on More info when you get the "Windows protected your PC" screen, and then click Run anyway in the next screen. Windows Vista/7/8 users: if when running Jutoh you see error messages about a resource load failure, please install Jutoh into a folder other than Program Files, or adjust permissions for the Program Files folder. Jutoh for Mac OS X Jutoh for Mac OS X (versions 10.3.9 and above) is about 30 MB in size. Jutoh 2.13 for Intel/PowerPC Mac OS X 10.3 and above Jutoh for Linux

iBooks Author hands-on: making textbooks in the 21st century Alright, I just fired up iBooks Author, which is a free download from the Mac App Store. It installed quickly, and after selecting a template I was editing my first-textbook in moments. The single-window interface is just like any other modern iWorks app, and Apple isn't offering it for free for lack of features. Like Josh mentioned in the liveblog, the app is a mix of Keynote and Pages, with drag and drop layout tools and a sidebar of "slides" representing the table of contents. Of course, the app isn't exactly designed for your mom to publish a interactive textbook of her vacation: while some aspects are a breeze, there's no WYSIWYG to build 3D objects from scratch or code HTML5 elements, you'll have to do that externally. Also worth noting: nothing in this tool makes you automatically an expert on any educational topic. iBooks Author hands-on Previous Next View full Gallery Related Items textbooks apple iwork textbook ibooks ibooks 2 ibooks author ibook

Is the Honeymoon Over for eBook Lending? - Technorati Entertainment I remember when I first heard about Overdrive, an app that allowed me to borrow electronic books from my local library, without even having to rush down during my lunch hour to the library. This was an idea whose fruition I had been long awaiting. Within a few clicks, I could have a book in my hands, reading merrily on my iPhone or iPad. I couldn't help the feeling that I had somehow gotten away with something, that some library cop was going to pull back the book from my device and say "No, no no..." I should have known things were too good to be true. After such a short honeymoon, between Overdrive, me and my iPad, it would appear the library cop has arrived. As of yesterday, major publishing house Penguin Books has pulled the ability for libraries using ebook lending service Overdrive to lend any new titles, drastically reducing future offerings. According to Penguin, their issue was the ease it took to use Overdrive's service. Continued on the next page

Publishers Hustle to Make E-Books More Immersive | Underwire It was bound to happen. The record industry was forced to adapt when iTunes came along. Reluctant film studios made the jump to Netflix and other streaming services. And now, with tablets selling at mind-boggling rates, book publishers are scrambling to figure out how to bring their ancient medium into the digital realm. All the usual fears about moving into the 21st century spook the book companies, just as they did when younger industries made the leap. “The conversation a year ago was, ‘Oh my god you’re going to kill my book sales’ and ‘You can’t release e-books simultaneously’ and ‘Don’t do an app, no one will buy my book if the app is $2.99!’” “The comfort zone is increasing. Now book publishers know they must evolve: 21 percent of Americans say they’ve read an e-book, according to a Pew Internet study released last week, and the Association of American Publishers says 114 million e-books were sold in 2010 (the most recent year for which numbers are available).

iBooks Author For Dummies Cheat Sheet In addition to creating an e-book for use on the iPad, you may want to use your iBooks Author e-book’s text elsewhere, such as to create versions of your book for distribution as Kindle e-books or as ePub e-books that can be read on more devices than just the iPad. iBooks Author lets you export the book’s text so that you can create a version of the e-book in other programs (such as Sigil for ePub e-books). You can also create a PDF version of your e-book that can be read on all sorts of devices that use Adobe Systems’ Adobe Reader software, as well as those that use the included Preview application in Mac OS X and the built-in Quick Look technology in both Mac OS X and iOS. The export process is simple — just follow these steps: Choose File→Export.Alternatively, choose Share→Export.A settings sheet with export options appears. An exported text file contains only the mainbar text — text in objects’ captions and in other text boxes is ignored.