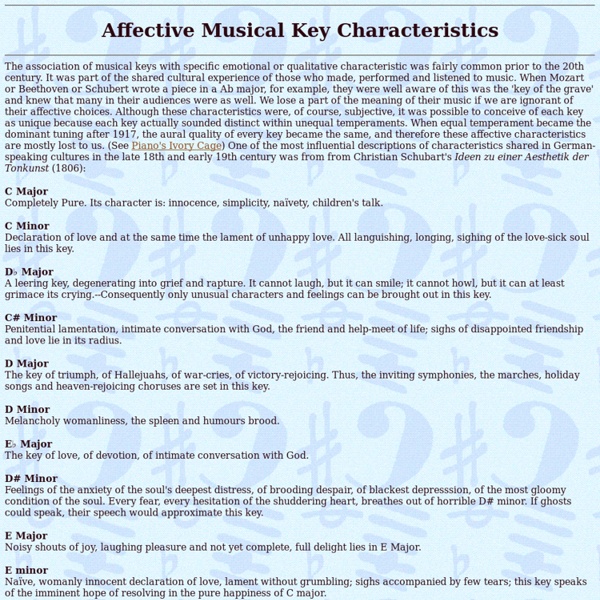 Affective Musical Key Characteristics The association of musical keys with specific emotional or qualitative characteristic was fairly common prior to the 20th century. It was part of the shared cultural experience of those who made, performed and listened to music. When Mozart or Beethoven or Schubert wrote a piece in a Ab major, for example, they were well aware of this was the 'key of the grave' and knew that many in their audiences were as well. We lose a part of the meaning of their music if we are ignorant of their affective choices. Although these characteristics were, of course, subjective, it was possible to conceive of each key as unique because each key actually sounded distinct within unequal temperaments. C Major Completely Pure. C Minor Declaration of love and at the same time the lament of unhappy love. D♭ Major A leering key, degenerating into grief and rapture. D Major The key of triumph, of Hallejuahs, of war-cries, of victory-rejoicing. A♭ Major Key of the grave.

The Scale That Will Change Your Life Adrian Galysh A number of years ago, I was teaching at a guitar workshop in Pittsburgh. I had taught at this annual workshop a number of times and always looked forward to my week there, not only because I was able to teach a class of students who really wanted to learn guitar, but also for more selfish reasons. I liked meeting and learning from some of the other instructors and clinicians. So during this week, jazz guitarist Henry Johnson and I were jamming on each other's guitars, and I took the opportunity to ask him, "Hey, how can I, as a rock guitarist, get that 'outside' jazzy/Alan Holdsworth-y sound?" His answer was so simple and astonishing.

45 ways to avoid using the word 'very' Writers Write is your one-stop resource for writers. Use these 45 ways to avoid using the word ‘very’ to improve your writing. Good writers avoid peppering their writing with qualifiers like ‘very’ and ‘really’. Top 100 Best Acoustic Songs Ever -The Greatest of All Time Here is a list of the best acoustic songs ever written. Acoustic music has come a long way over the years, so many are “oldies” and many are “newies.” We are basing this list off of historical album sales, the ever so objective factor of acoustic-ness, but mostly how easily they make us cry. They are mostly arranged in alphabetical order, by song – so make sure you check out the whole list!

Random Song Form Generator Learn How to Write Songs Random Song Form Structure Generator Use this online tool to generate song structures. This will provide you with ideas for creating good song frameworks. To create a new song form just click on the refresh button. Understanding the CAGED system - Printer friendly Start by locating the Root Notes of each of these familiar chords: Each set of root notes forms a unique movable Octave Pattern : By laying these five patterns out so that they overlap each other in the order that spells the word 'CAGED' we are able to chart every occurrence of any given note on the fretboard: For a more detailed explanation of how to use the CAGED system to locate scales, chords and just about every other form that you need to learn to master the guitar, refer to our new ebook: 'Fifty Flexible Lesson Plans for Teaching Guitar'.

Octave Equivalent Music Lattices Octave Equivalent Music Lattices 5-Limit Triangular (Hexagonal) Lattices The 5-limit lattice, like 5-limit harmony, is defined around the triads: I analyzed the chords to 1300 songs for patterns. This is what I found. (Part 3) Interactive Discovery Last year, we discussed the first results of a long term effort to study the patterns found in the chords of popular songs. The reception that we got was incredibly positive, and we received a ton of great feedback. The two most common questions we’ve gotten from people have been: “I really like the sound of chords X Y Z together. What other songs use this same progression? Know Every Note on the Guitar in 9 Days Knowing every note on the guitar is a challenge unique to the instrument. A saxophone has only one way to finger each note, while a guitar usually has a few different strings and four fingers to choose from. String a few notes together and the permutations of how to play them will wreck your brain. Pianists have a similar problem with ten available digits, but you can memorize the notes on a keyboard in a matter of minutes; the same pattern of white and black keys repeats every octave. The challenge with navigating the guitar fretboard is its two-dimensional layout. It’s a matrix, while nearly every other instrument has a linear path of notes from the bottom to the top of its range.

Recovered The Chord Guide: Pt III – Chord Progressions Chord progressions are the canvas on which musicians paint their masterpieces, and it’s a canvas which is a piece of art in itself. A chord progression can be subtle and in the background or it can be blatant and up front; it can be simple and catchy, or it can be technical and complex, it can stay in one key or it can change like the seasons. In any of these cases a chord progression is what drives the song as it literally shapes the music that accompanies it. Chord progressions are like a cozy home where melody and rhythm can kick their feet up. All the songwriting giants, like John Lennon, Paul McCartney, George Harrison, and Bob Dylan, to name a few, have/had a tremendous knowledge of the art of the chord progression.

Music, Mind, and Meaning This is a revised version of AI Memo No. 616, MIT Artificial Intelligence Laboratory. An earlier published version appeared in Music, Mind, and Brain: The Neuropsychology of Music (Manfred Clynes, ed.) Plenum, New York, 1981 Why Do We Like Music?

agreed. its not that i believe it. i just found it entertaining that they were coming up with that stuff in 1806! by gr_store_feet May 17

Other than entertainment, like astrology, phrenology, etc.,j this kind of arbitrariness has no value at all and it is sad that people actually believe it. by lynzzr May 17