Writing tutor for Introductory Philosophy Courses. Attempting to achieve a result that is aesthetically pleasing within an identifiable literary style. 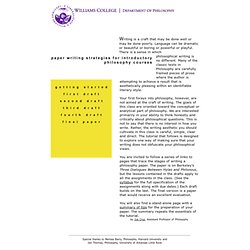 Your first forays into philosophy, however, are not aimed at the craft of writing. The goals of this class are oriented toward the conceptual or analytical part of philosophy. We are interested primarily in your ability to think honestly and critically about philosophical questions. This is not to say that there is no interest in how you write. Rather, the writing aesthetic you should cultivate in this class is careful, simple, clear and direct. Supervenience and Determination [Internet Encyclopedia of Philosophy] The term “supervenience” gained prominence in the twentieth century when it was suggested that moral properties supervene on natural properties and that our mental characteristics supervene on our physical characteristics such as the properties of our nervous system. 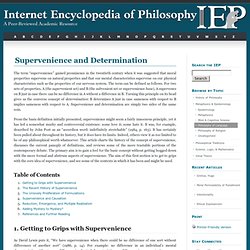 The term can be defined as follows. For two sets of properties, A (the supervenient set) and B (the subvenient set or supervenience base), A supervenes on B just in case there can be no difference in A without a difference in B. Turning this principle on its head gives us the converse concept of determination: B determines A just in case sameness with respect to B implies sameness with respect to A. Supervenience and determination are simply two sides of the same coin. From the basic definition initially presented, supervenience might seem a fairly innocuous principle, yet it has led a somewhat murky and controversial existence: some love it; some hate it. 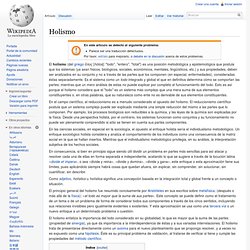 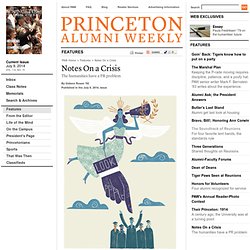 I confess that the first time I heard the phrase I had no idea what it meant, since so far as I could see — that is, roughly, from Joseph Henry House to 1879 Hall via East Pyne — the humanities were thriving. Eight years later, I remain unconvinced that we face a crisis in the humanities (though there are profound problems in higher education with implications for the humanities). But I now have a much clearer sense of what the crisis is supposed to be, and why it appears to affect the humanities in particular. We have been talking about a “crisis in the humanities” on and off since the 1930s.

The rhetoric of crisis returned around 1980, though this time the challenge was much more serious. At Princeton, enrollments in humanities courses have been stable for at least a decade, despite the financial downturn of 2008. Metaphysics. 1. 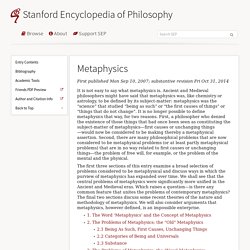 The Word ‘Metaphysics’ and the Concept of Metaphysics The word ‘metaphysics’ is notoriously hard to define. Twentieth-century coinages like ‘meta-language’ and ‘metaphilosophy’ encourage the impression that metaphysics is a study that somehow “goes beyond” physics, a study devoted to matters that transcend the mundane concerns of Newton and Einstein and Heisenberg. This impression is mistaken. Intuitionistic logic. ("true" and "false" respectively) regardless of whether we have direct evidence for either case. 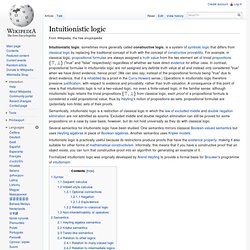 Syntax[edit] The Rieger–Nishimura lattice. Or . 1310: Goldbach Conjectures. Explain xkcd: It's 'cause you're dumb. 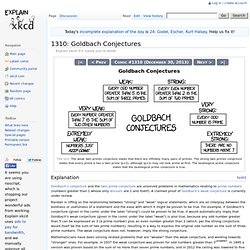 [edit] Explanation Goldbach's conjecture and the twin prime conjecture are unsolved problems in mathematics relating to prime numbers (numbers greater than 1 whose only divisors are 1 and itself). A claimed proof of Goldbach's weak conjecture is currently under review. Randall is riffing on the relationship between "strong" and "weak" logical statements, which are an interplay between the boldness or usefulness of a statement and the ease with which it might be proven to be true.