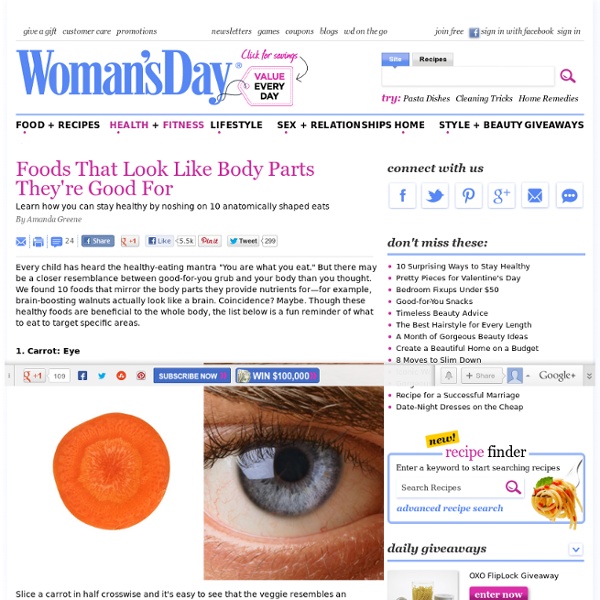 Every child has heard the healthy-eating mantra "You are what you eat." But there may be a closer resemblance between good-for-you grub and your body than you thought. We found 10 foods that mirror the body parts they provide nutrients for—for example, brain-boosting walnuts actually look like a brain. Coincidence? Maybe. Though these healthy foods are beneficial to the whole body, the list below is a fun reminder of what to eat to target specific areas. 1. Slice a carrot in half crosswise and it's easy to see that the veggie resembles an eye—look closely and you'll even notice a pattern of radiating lines that mimic the pupil and iris. 2. The folds and wrinkles of a walnut bring to mind another human organ: the brain. 3. Long, lean stalks of celery look just like bones—and they're good for them, too. 4. The lightbulb shape of an avocado looks like a uterus, and it supports reproductive health as well. 5. 6. 7. 8. 9. 10.

The 10 Best Foods for Your Looks - Lifestyle You can slather yourself from your forehead to your pinkie toe in organic lotions, but if you think that alone will make you glow, we have some bad news. From its well documented health benefits to its undeniable impact on physical beauty, good nutrition is the pillar of every kind of healthy lifestyle. That doesn't mean you need to swear off bacon and beer or anything. The trick is finding the right balance. Healthy Chicken Recipes - Easy Chicken Recipe at WomansDay.com Chicken: the dieter’s best friend. Quick and easy to make, this popular protein is low in calories and full of amino acids, which boost your body’s ability to function. But being low-cal doesn’t have to mean boring and bland; if done right, light and, yes, even dark meat are ideal for keeping you on track.

Carnarvon, Northern Cape Carnarvon is a small town in the Northern Cape Province of South Africa. Originally established in 1860 as the village of Harmsfontein, it was located within the territory of Schietfontein, the only water source in the area and the site of the Rhenish mission station founded in 1847 by the missionary, Rev. Christian Wilhelm Alheit. The 48 Laws of Power - Wikipedia, the free encyclopedia - StumbleUpon Background[edit] Greene initially formulated some of the ideas in The 48 Laws of Power while working as a writer in Hollywood and concluding that today's power elite shared similar traits with powerful figures throughout history.[5] In 1995, Greene worked as a writer at Fabrica, an art and media school, and met a book packager named Joost Elffers.[4][8] Greene pitched a book about power to Elffers and six months later, Elffers requested that Greene write a treatment.[4] Although Greene was unhappy in his current job, he was comfortable and saw the time needed to write a proper book proposal as too risky.[10] However, at the time Greene was rereading his favorite biography about Julius Caesar and took inspiration from Caesar's decision to cross the Rubicon River and fight Pompey, thus inciting the Great Roman Civil War.[10] Greene would follow Caesar's example and write the treatment, which later became The 48 Laws of Power.[10] He would note this as the turning point of his life.[10]

25 Healthy Foods for 2012 By kathypatalsky | healthy foods to try in 2013 So often we talk about removing ‘bad’ foods from our diets and restricting what we eat. Herbs and Spices - Health Benefits of the Spices at WomansDay.com Chances are you sprinkle cinnamon into your morning oatmeal or add a dash of oregano to pizza without giving the spices much thought. But did you know your favorite flavors can actually do your body good? According to Christina Suarez, master herbalist and owner of TheGoodHerbCo.com, while spices are only effective when eaten at least daily, each has its own specific health benefits.

The top 25 must-see movies of 2012 - Den of Geek - StumbleUpon Update: You can now find out list of the top 25 must-see movies of 2013 here.And our 25 must-see movies of 2014 are here. As 2011 draws to a close, one eye is inevitably on the treats that are lying ahead for 2012. With that in mind, we've got our line-up of, as things stands, the 25 films that are brightest on our radar. Lunar Deities For thousands of years, people have looked up at the moon and wondered about its divine significance. It should come as no surprise that many cultures throughout time have had lunar deities - that is, gods or goddesses associated with the power and energy of the moon. If you're doing a moon-related ritual, in some traditions of Wicca and Paganism you may choose to call upon one of these deities for assistance. Let's look at some of the better known lunar deities. Alignak

You Bar - Custom Protein, Nutrition & Energy Bars Our Build-A-Bar page is designed to make it easy and fun to create your ideal custom energy bars. Simply select the ingredients you like and name your bar at the bottom of the page. If there is an ingredient you want that is not listed, please type it into a Special Request box and we will do our best to source it for you. In addition, if you are having trouble creating specific nutritional configurations such as 20g of protein, please enter those requirements in a Special Request box, and we will try our best to make it. Japanese Steakhouse White Sauce (Yum Yum Sauce, Shrimp Sauce, Sakura Sauce) Recipe How to Make Japanese Steakhouse White Sauce - Shrimp Sauce - Yum Yum Sauce - Sakura Sauce - You Finally Found The Recipe! There are actually two ways to make Japanese white sauce. The first uses store-bought mayonnaise. The second involves making your own mayonnaise.

mental_floss Blog & 11 Pencil Vs. Camera Images - StumbleUpon 986 653Share10.7K Born in Abidjan, Ivory Coast and now living in Belgium, Ben Heine is an amazing artist who overlaps hand-drawn works of art with photos to create stunning images. I selected eleven of his Pencil Vs. Beyond Pink and Blue: A Look at Gender Colors It goes beyond culture. There is science behind the gender-relationships when it comes to colors. A study by John Hallock compares the color preferences among various demographics and takes into account information collected from 22 countries. Our friends at KissMetrics put together this informative infographic that tears down the gender barriers to reveal what really goes on in visualizations. Click any portion to enlarge.

7 Super Snacks That Heal If some doctors had their way today, Americans would be more medicated than industrial feedlot cattle. But what most people don’t realize is that the first line of defense against stress, fatigue, depression, and so many other maladies is found in supermarket aisles, not in the drug store. Research shows that the vitamins, minerals, and active compounds specific to certain fruits, vegetables, and even chocolate and red wine have an immediate and lasting impact on your mood, your health, your fitness — even your sex life.