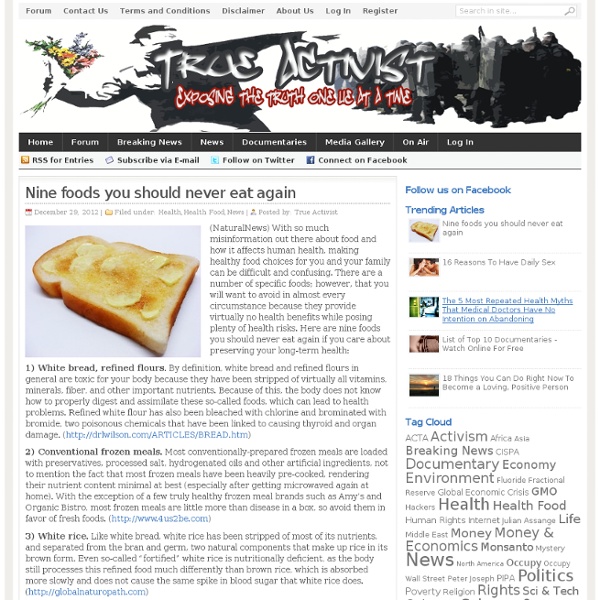 (NaturalNews) With so much misinformation out there about food and how it affects human health, making healthy food choices for you and your family can be difficult and confusing. There are a number of specific foods; however, that you will want to avoid in almost every circumstance because they provide virtually no health benefits while posing plenty of health risks. Here are nine foods you should never eat again if you care about preserving your long-term health: 1) White bread, refined flours. By definition, white bread and refined flours in general are toxic for your body because they have been stripped of virtually all vitamins, minerals, fiber, and other important nutrients. Because of this, the body does not know how to properly digest and assimilate these so-called foods, which can lead to health problems. 2) Conventional frozen meals. 3) White rice. 4) Microwaveable popcorn. 5) Cured meat products with nitrates, nitrites. 6) Most conventional protein, energy bars. Sources :

Treating Infections with Homeopathy » Tenpenny Integrative Medical Center By Janet Levatin, MD Everyone gets run down from time to time, allowing a nasty virus to set up shop. The majority are self-limited illness that do not require antibiotics, usually resolving on their own without lasting consequences. I would like to share a few recent experiences that demonstrate the effectiveness of homeopathy to treat patients with a variety of infections: A 45-year old mother of three came to our Clinic with a significant sinus infection. A second patient of mine was a 50-year old women with a history of recurrent bladder infections (UTIs). And finally, a mother brought in her 5-year old child who had a cough, cold and ear pain. These are just few examples of the many children and adults I have treated homeopathically during my career. We hold places in the schedule every day to take care of acutely ill adults and children.

The Importance of Fever | Dr. Tenpenny Childhood fevers can be frightening, mostly because they are misunderstood. A fever is an increase in body temperature above the “normal range.” But the definition of “normal” can vary from person to person. There are several causes of fever, but it is most commonly associated with dozens of different viruses, bacteria and parasites that cause upper respiratory infections, pneumonia, diarrhea, and urinary tract infections. When infectious micro-organisms invade the body, it is fever that gets our attention. However, contrary to the reflex need to give an aspirin to make a fever stop, an elevated temperature can be an expression of the immune system working at its best. Fever phobia Fever is certainly one of the most common reasons that parents seek medical attention for their children. In 2001, a follow-up study was conducted to see if the trends in “fever phobia” had changed. “Fever Phobia Revisited: Have Parental Misconceptions About Fever Changed in 20 Years?” When is fever harmful? 1.

Why You Should Avoid Tamiflu » Tenpenny Integrative Medical Center By Dr. Sherri Tenpenny, DO, AOBNMM, ABIHM January 12, 2013: Over the last few weeks, news outlets have been trumpeting reports on the latest influenza epidemic. How Tamiflu Works: The surface of influenza viruses have two proteins. After new viruses are formed, they must be released to invade adjacent cells. Tamiflu Gets Approval In January, 2000, Tamiflu (oseltamivir) became the first oral neuraminidase inhibitor to obtain FDA approval. The effectiveness of Tamiflu was assessed by self-administered “symptom scores”, used to document the reduction of influenza-associated symptoms after taking the drug. Amazingly enough, the drug had been tested on only 849 people who had culture-confirmed influenza. “The clinical relevance of the modest treatment benefit is a highly subjective question. There have been a few studies suggesting that Tamiflu could be used to prevent the flu. Tamiflu-resistant Viruses Tamiflu Side Effects Everyone, especially parents, should be wary of using this drug.

The Life of Eden Marie: What's Missing From Folic Acid Awareness Week As I got on Facebook yesterday and scrolled down my newsfeed, something caught my attention. Somebody posted that Folic Acid Awareness Week is January 6-12 this year. They posted some information from the National Counsel on Folic Acid. I went onto the NCFA website and started reading some things, and the site talked about supplementing folic acid, and eating folic acid fortified foods (like cereal, pasta, bread, etc.) to get enough folic acid and prevent neural tube defects. But our cells and bodies can not use folic acid. So if folic acid is as good as useless for so many people, how can we prevent things like neural tube defects? Fortunately, there are a couple ways to get the folate that our bodies can use. The second way you can get folate is by taking a methylfolate supplement. *Be sure to go to the "Resources" page on each of these websites, because they lead to even more helpful resources - otherwise I'd be listing links all day.

HealThy Mouth World Summit | Americans 'are sicker and die younger' than people in other wealthy nations America may be one of the richest countries in the world, but its people are less healthy and more likely to die early from disease or accidents than those in any other affluent country, a damning official US report has found. Even the best-off Americans – those who have health insurance, a college education, a high income and healthy behaviour – are sicker than their peers in comparable countries, says the report by the US National Research Council and the Institute of Medicine. "We were struck by the gravity of these findings," said Steven H Woolf, professor of family medicine at Virginia Commonwealth University in Richmond and chair of the panel that wrote the report. The new report looked in detail at data from the late 1990s to 2008. For many years, Americans have had a shorter life expectancy than people in almost all the comparator countries and for the past three decades the gap has been widening, particularly for women. The US does badly in nine specific areas.

Lecture to Oxford Farming Conference, 3 January 2013 [Comments are now closed - it was getting impossible to manage them given the volume.] Chinese translation… Italian translation… German translation… Spanish translation… French translation… Vietnamese translation (shortened)… Italian version (also shortened) Thai version and Slovak version. NEW – Portuguese translation. 07 Mark Lynas from Oxford Farming Conference on Vimeo. I want to start with some apologies. As an environmentalist, and someone who believes that everyone in this world has a right to a healthy and nutritious diet of their choosing, I could not have chosen a more counter-productive path. So I guess you’ll be wondering – what happened between 1995 and now that made me not only change my mind but come here and admit it? When I first heard about Monsanto’s GM soya I knew exactly what I thought. This was also explicitly an anti-science movement. Obviously this contradiction was untenable. So I did some reading. I’d assumed that it would increase the use of chemicals.

Critical EPA report highlighting chemical dangers to kids is sidetracked Kevork Djansezian / Getty Images A playground at the Carson-Gore Academy of Environmental Sciences in Los Angeles. The $75.5-million elementary school, which was named after former Vice President Al Gore and pioneering environmentalist Rachel Carson, was built atop an environmentally contaminated piece of real estate. Construction crews replaced the toxic soil, which was poisoned by more than a dozen underground storage tanks, with clean fill. By Sheila Kaplan, Investigative Reporting Workshop A landmark Environmental Protection Agency report concluding that children exposed to toxic substances can develop learning disabilities, asthma and other health problems has been sidetracked indefinitely amid fierce opposition from the chemical industry. America’s Children and the Environment, Third Edition, is a sobering analysis of the way in which pollutants build up in children’s developing bodies and the damage they can inflict. “Why is it taking so long? More from Open Channel:

Humans Carry More Bacterial Cells than Human Ones We compulsively wash our hands, spray our countertops and grimace when someone sneezes near us—in fact, we do everything we can to avoid unnecessary encounters with the germ world. But the truth is we are practically walking petri dishes, rife with bacterial colonies from our skin to the deepest recesses of our guts. All the bacteria living inside you would fill a half-gallon jug; there are 10 times more bacterial cells in your body than human cells, according to Carolyn Bohach, a microbiologist at the University of Idaho (U.I.), along with other estimates from scientific studies. (Despite their vast numbers, bacteria don't take up that much space because bacteria are far smaller than human cells.) The infestation begins at birth: Babies ingest mouthfuls of bacteria during birthing and pick up plenty more from their mother's skin and milk—during breast-feeding, the mammary glands become colonized with bacteria. Intestinal bacteria also appear to keep our immune systems healthy.

The Body Ecology Guide to the Ten Healthiest Greens Crammed with vital nutrients for every body, greens just might be the healthiest food our planet has to offer! Popeye wasn't just a man with muscles. He was a man with brains, too. He knew the power of leafy greens could get him out of a jam in a flash. (Okay, he was just a cartoon character... but you get the idea!) Going Green - A Whole New Meaning Leafy green vegetables rule the roost in the vegetable kingdom. The Power of Green Just check in with a bowl of greens and you'll find they are brimming with vital nutrients that provide a variety of health, growth and fertility benefits. Your Liver's Favorite Color is Green Livers love greens because they're amazing detoxifiers. A Lean, Mean, Green Machine Just to give you an idea of how important they are to include in our diets at every meal, this is a sample of what you can expect with every bite of green goodness: Fiber - A leader in blood sugar regulation, blood cholesterol regulation and bowel function.Protein - Perfect for vegetarians!

10 Painkiller Facts Your Doctor Doesn’t Know About | ThePeoplesChemist.com By now you know that the painkiller Vioxx is deadly. That wasn’t always the case. Prior to its release, The New York Times told patients that, “Two large drug companies say they have developed a new class of drugs that can relieve pain and inflammation without the gastrointestinal side effects of current drugs.” Advertising in disguise, the new pain killers were positioned as safer alternatives for the 13 million Americans who take Tylenol and non steroidal anti-inflammatory drugs like ibuprofen, naproxen and dicolfenac. In 2004, FDA scientist Dr. Where’s the war on painkillers? Today, a barrage of pain meds are still on the market, which carry serious risks to the entire family. Fact #1: Child Overdose is Far Too Common It’s very easy for children to overdose on Tylenol. Fact #4: Motrin causes more Headaches Motrin’s side effects include: constipation, diarrhea, dizziness, gas and HEADACHE. How do you know if your headache is the one you started with or a side effect? About the Author