9 Disturbing Side Effects of Soda. World Renown Heart Surgeon Speaks Out On What Really Causes Heart Disease. Is Sugar Toxic? If Lustig is right, then our excessive consumption of sugar is the primary reason that the numbers of obese and diabetic Americans have skyrocketed in the past 30 years. 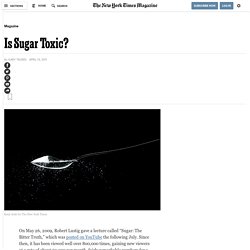 But his argument implies more than that. If Lustig is right, it would mean that sugar is also the likely dietary cause of several other chronic ailments widely considered to be diseases of Western lifestyles — heart disease, hypertension and many common cancers among them. The number of viewers Lustig has attracted suggests that people are paying attention to his argument. When I set out to interview public health authorities and researchers for this article, they would often initiate the interview with some variation of the comment “surely you’ve spoken to Robert Lustig,” not because Lustig has done any of the key research on sugar himself, which he hasn’t, but because he’s willing to insist publicly and unambiguously, when most researchers are not, that sugar is a toxic substance that people abuse.

Is sugar toxic? - 60 Minutes. The food industry is waging war on your cells with these 10 toxic ingredients. Nine foods you should never eat again. (NaturalNews) With so much misinformation out there about food and how it affects human health, making healthy food choices for you and your family can be difficult and confusing. 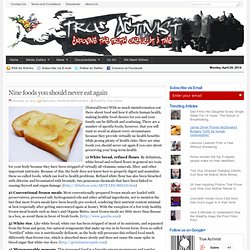 There are a number of specific foods; however, that you will want to avoid in almost every circumstance because they provide virtually no health benefits while posing plenty of health risks. Here are nine foods you should never eat again if you care about preserving your long-term health: 1) White bread, refined flours. By definition, white bread and refined flours in general are toxic for your body because they have been stripped of virtually all vitamins, minerals, fiber, and other important nutrients. Because of this, the body does not know how to properly digest and assimilate these so-called foods, which can lead to health problems. 2) Conventional frozen meals. 3) White rice. 4) Microwaveable popcorn. 5) Cured meat products with nitrates, nitrites. 6) Most conventional protein, energy bars.

Sources : 7 Foods You Should Never Eat. Sometimes, even foods that seem healthy can harbor hidden problems that can affect our health and our planet. Here are seven foods you should never eat—and easy swaps to help eliminate them from your kitchen. Conventional Apples Right at the top of the “dirty dozen” list, conventional apples are sprayed with the most pesticides of almost any fruit because their growing method means they don’t develop natural pest resistance. Farm workers exposed to these pesticides have documented higher incidents of cancer, and more and more studies are linking pesticides in the body to Parkinson’s disease. Make the switch: Buy organic apples! Conventionally Grown Potatoes Think about it: A potato is a root vegetable, and plants absorb nutrients—and other junk—from the soil through their roots.

Make the swap: Buy organic potatoes—even frozen ones. What Happens In Your Body When You Eat Ramen And Gatorade. By Briana Rognlin for Blisstree.com Most of the time, we hear about avoiding processed foods because they'll make us fat. 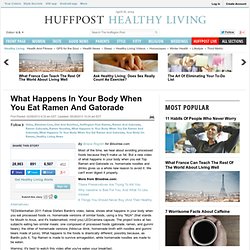 But a new video of what happens in your body when you eat Top Ramen and Gatorade vs. homemade noodles and drinks gives us a whole new reason to avoid it: We can't even digest it properly. More from Blisstree.com:These Preservatives Are Trying To Kill YouWhy Vaseline Is Bad For You, And What To Use Instead6 Things You Should Never Buy (And Their Healthy Alternatives) TEDxManhattan 2011 Fellow Stefani Bardin's video, below, shows what happens in your body when you eat processed foods vs. homemade versions of similar foods, using a tiny "M2A" (that stands for Mouth to Anus, and it's trademarked, mind you) LED/camera capsule. 170 Scientific Reasons to Lose the Soy in Your Diet. With all the loads of scientific data available that soy is not a healthy part of anyone’s diet, it shocks me how many folks are still on the “soy is good for you” bandwagon – even people who should know better like your doctor! 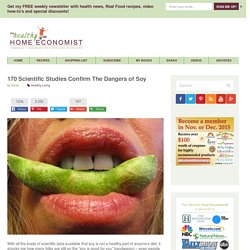 I just got an email from a reader the other day who had been to multiple doctors, both holistic and conventional, and all but one of them were telling her that plenty of soy in her diet would help her menopause symptoms. I had another shocking conversation recently with a doctor of Internal Medicine who had no idea soy was a potent goitrogenic food and actively suppressed thyroid function. Be careful folks. Dangers of Soy. Are you convinced yet about the dangers of soy? 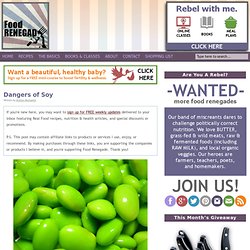 Many aren’t. “Is soy bad for you? …Really?” I hear the question so often I want to scream. After decades of hearing marketing spin about how soy is a wonder food, a protein-rich legume able to rescue us from our dependence on meat, I suppose it’s understandable why so many people have yet to understand fully the dangers of soy. Well, it isn’t. Modern wheat a "perfect, chronic poison," doctor says. (CBS News) Modern wheat is a "perfect, chronic poison," according to Dr. 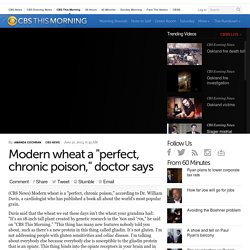 William Davis, a cardiologist who has published a book all about the world's most popular grain. Davis said that the wheat we eat these days isn't the wheat your grandma had: "It's an 18-inch tall plant created by genetic research in the '60s and '70s," he said on "CBS This Morning. " "This thing has many new features nobody told you about, such as there's a new protein in this thing called gliadin. It's not gluten. I'm not addressing people with gluten sensitivities and celiac disease. 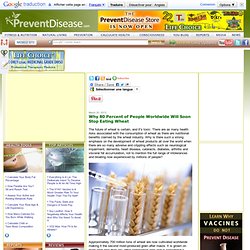 There are as many health risks associated with the consumption of wheat as there are nutritional benefits claimed by the wheat industry. Why is there such a strong emphasis on the development of wheat products all over the world when there are so many adverse and crippling effects such as neurological impairment, dementia, heart disease, cataracts, diabetes, arthritis and visceral fat accumulation, not to mention the full range of intolerances and bloating now experienced by millions of people? Approximately 700 million tons of wheat are now cultivated worldwide making it the second most-produced grain after maize. At some point in our history, this ancient grain was nutritious in some respects, however modern wheat really isn't wheat at all. Dr. If introduced, GE wheat will enter farmers’ rotations along with the already HT canola and soybeans. Health Effects 1.

Don't Have A Cow, But&#8230; More Bad News for Red Meat-Eaters. Vegans and vegetarians, and probably quite a few cows, are rejoicing over the newest study released by the Harvard School of Public Health. 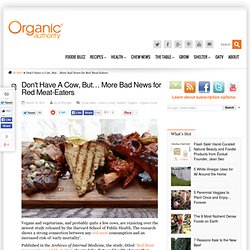 The research shows a strong connection between any red meat consumption and an increased risk of ‘early mortality’. Published in the Archives of Internal Medicine, the study, titled “Red Meat Consumption and Mortality” observed the diets and health of more than 100,000 men and women over the course of 28 years. The results found that nearly 6,000 of the almost 24,000 deaths during the study were related to cardiovascular disease and more than 9,000 from cancer, with regular consumption of red meat—especially processed and cured meats—linked to an increased risk of mortality.