33 Amazing Ideas That Will Make Your House Awesome 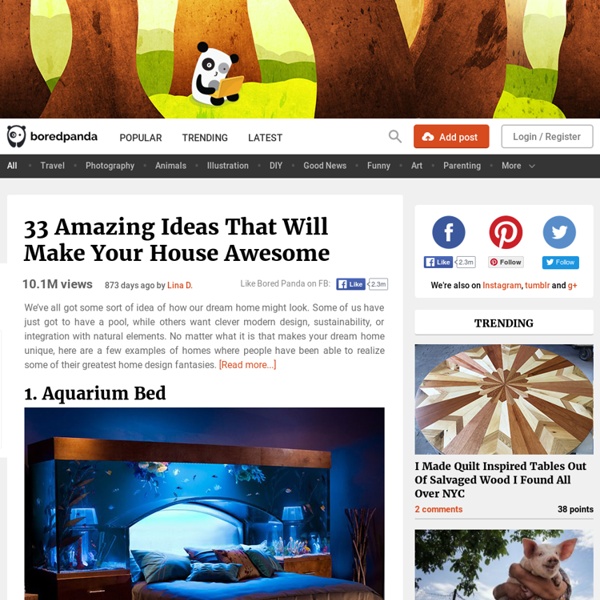 We’ve all got some sort of idea of how our dream home might look. Some of us have just got to have a pool, while others want clever modern design, sustainability, or integration with natural elements. No matter what it is that makes your dream home unique, here are a few examples of homes where people have been able to realize some of their greatest home design fantasies. [Read more...] These ingenious home improvements run from pools and aquariums to cleverly-hidden storage spaces, multi-purpose furniture and… cat transit walkways. Maybe you’ll recognize something that you’ve always wanted to see, or maybe the pictures will get your juices flowing and inspire you to come up with or even build something new. Warning – viewing some of these images may make you feel dissatisfied with your current home! 1. Image credits: acrylicaquariums.com 2. Image credits: Hilden and Diaz 3. Image credits: unknown 4. Image credits: psfk.com 5. Image credits: Justin Kemp 6. Image credits: unknown 7. 8. 9. 10.

The Most Wonderful Castles From Around The World Since childhood castles are explaind as grand places, full of your favorite fairytale characters and their dreaded evil step mothers. No matter where it is or who lives there, castles contain such a majestic air about them. Castles can be romantic, spooky, historical, or downright beautiful, and usually they are all of the above. Back in the medieval period, most castles were built as a form of control, so that a ruling family could keep watch over their surrounding town. 25 Things People in Healthy Relationships Don’t Do Healthy relationships don’t just happen; they take time, patience and two people who truly want to work together to create something meaningful. What does it take to create and nurture a healthy relationship? That’s a question Angel and I get asked by readers and coaching clients on a daily basis. After a decade of coaching individuals and couples and researching how people build healthy, lasting relationships, we have learned a lot about what it takes. Whether you’re working to improve your marriage, a dating relationship, or a friendship, there are lots of little things you can do to keep your relationship on track. And since we’ve recently covered some of these healthy relationship strategies here and here, today I want to take a look at the flipside – what people in healthy relationships don’t do:

15 uses for Egg Shell-don't through away Egg Shells after having your Breakfast It is a common perception among us that we think of egg shells nothing but the waste. This perception is completely wrong. A person should know how these shells could be utilized efficiently so as to make the most out of these shells. There are numerous benefits of egg shell. So, don’t throw away those egg shells after taking your breakfast. Below are some of the uses of egg shells.

Best Travel Hacks Sometimes it seems like you need a vacation from your vacation. Although you usually associate traveling with relaxation, there are some aspects that can definitely stress you out. Luckily, we've complied some awesome travel hacks of our own and from Quora that will help make your trip more smooth: How To Make Sourdough Bread — Cooking Lessons from The Kitchn For many of us home bakers, making a good loaf of sourdough bread feels like striving for the World Cup or an Olympic gold medal. It's the challenge to top all challenges and takes real commitment, but it's also something that's completely achievable. Are you ready to take on the challenge of a true sourdough bread? If so — or even if you're just curious to see what the fuss is about — here's everything you need to know!

Shalom, motherf****r. I don’t know how to write this without sounding like the kind of person I’m about to sound like, but sometimes you’ve just got to write it like you feel it. And I feel this. I un-friended a ‘friend’ from Facebook the other day. Get The Times of Israel's Daily Edition by email and never miss our top stories Free Sign up! To be honest, he wasn’t really a friend. Girls Don’t Poop – Poopourri.com “I was a little skeptical about this product….IT REALLY WORKS! I plan to order more as gifts for family and friends.” —5 star review by nineanddiner on Amazon “First one was given as a gift then I purchased some so could have in every bathroom. would highly recommend.” —4 star review on Amazon “There is not even a “trace odor” after the fact!! A Great Housewarming, Wedding Shower or just a fun gag gift that’s really practical!” 5 star review by James Blake

Natural Building Workshops April works on some of the last remaining joints before the timber frame assembly I think I’ve realized that the excitement of timber framing can be represented by a curve. If the x axis on a bar graph represents time, and the y excitement, the line climbs and rises from left to right. The entire process is gradually more invigorating and interesting as you proceed on a project. Snowy Treehouse Tiny treehouse in Hungary, Börzsöny mountains. Build by Ferkó Gajdó. More info. here.