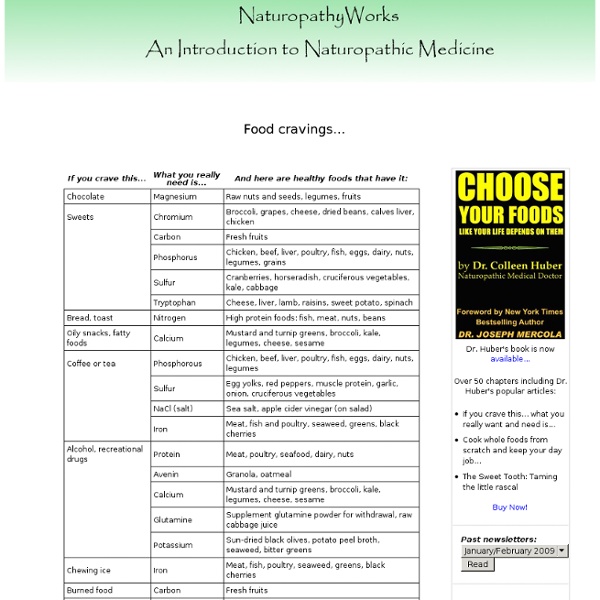 HomeEmail The information on this site is for educational purposes only. It is not intended to diagnose, treat or cure any diseases or illnesses. The statements on this website have not been evaluated by the Food and Drug Administration. If you have a medical condition, consult your naturopathic physician. Consult your naturopathic physician or other qualified health care professional before making changes in diet or lifestyle.

The World's Healthiest Foods 100 foods that can serve as the basis of your Healthiest Way of Eating Links to the articles about these foods can be found below. In addition to questions about our foods, we often get asked about beverages and sweeteners.

The 29 Hardest Ab Exercises Travis McCoy/travismccoy.com Overview Think you’re hardcore -- or that you have a hard core? Prove it! These 41 midsection-mangling moves are some of the most advanced on the planet. Alternative Medicine Solutions: Spice Up your Life Cinnamon This spice which is considered to perform detoxification to the organism and stimulate brain function, has antiseptic properties that have proved like most effective for urinary tract infections. Also contains components that have calming properties and are also useful for reducing pain.

Abs Diet: Oblique Exercises Working your obliques is crucial to having the strong, lean body you want. Try these 6 exercises to strengthen your core and bulletproof your obliques. Oblique V-Up 10 Power Food Combos The Oscar winning visionary filmmaker opened up during a Reddit AMA on Saturday afternoon. James Cameron, the acclaimed filmmaker behind sci-fi classics like Terminator, Aliens, and Terminator 2, as well as the blockbuster behemoths Titanic and Avatar, participated in a surprisingly candid Reddit AMA on Saturday afternoon. The self-proclaimed “king of the world” was online promoting Years of Living Dangerously, a 9-part documentary series about the filmmaking styles of top directors, which will premiere on Sunday, April 13 on Showtime.

The 29 Healthiest Foods on the Planet The following is a "healthy food hot list" consisting of the 29 food that will give you the biggest nutritional bang for you caloric buck, as well as decrease your risk for deadly illnesses like cancer, diabetes and heart disease. Along with each description is a suggestion as to how to incorporate these power-foods into your diet. Fruits 01. Apricots Insanity Workout Drop serious pounds and sculpt sexy curves with Insanity, the DVD craze that lives up to the hype. The magic behind the routine comes from plyometrics: explosive, full-body exercises that rev your heart rate and ratchet up metabolism to torch megacalories and build lean muscle. We asked Insanity creator Shaun Thompson for his top multitasking moves to help you get an insane body in only 20 minutes.

Taking Charge of Your Health Let thy food be thy medicine and thy medicine be thy food. - Hippocrates (460-377 BC) You need only to view the movie Super Size Me to understand how foods impact the body. In the movie, the director Morgan Spurlock chronicles the adverse health outcomes he experienced from eating nothing but fast food for several weeks. He not only gained weight, he experienced alarming metabolic changes that put him at risk for heart disease, diabetes, and hypertension. 1200 Calorie Diet and Meal Plan 1200 calories per day is about the lowest a woman should go when aiming for fat loss. This level of calories has been found to help with weight loss in trials. For men this figure is around the 1500-1700 calorie mark.

Type 2 diabetes in newly diagnosed 'can be reversed' 24 June 2011Last updated at 01:19 Researchers found that blood sugar levels of all participants had returned to normal in one week. An extreme eight-week diet of 600 calories a day can reverse Type 2 diabetes in people newly diagnosed with the disease, says a Diabetologia study. Newcastle University researchers found the low-calorie diet reduced fat levels in the pancreas and liver, which helped insulin production return to normal. Seven out of 11 people studied were free of diabetes three months later, say findings published in the journal.

Foods to Improve Moods - Healthy Living Tips at WomansDay.com While that tub of ice cream in the back of the freezer may be what you crave when you’re feeling blue, there is a long list of other (healthier!) foods that can cure a grouchy morning or a stressed-out afternoon. We talked to the experts to get the scoop on what to eat to make you feel better no matter what your mood. Stressed: Eat Chocolate The scenario: It’s Friday at 6:30 p.m.