Lots of Jokes - Did You Know? 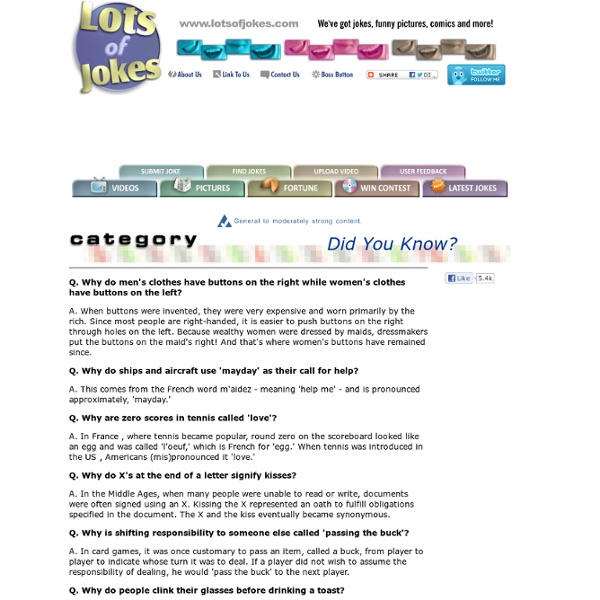 30 Most Ridiculous Doodles on Drawing Something Draw Something is a mobile app developed by Omgpop. It was one of the Mobile apps which won the Flurry App Spotlight Awards in 2012. In the first five weeks after its launching, the game was downloaded 20 million times. List of common misconceptions - Wikipedia, the free encyclopedia - StumbleUpon From Wikipedia, the free encyclopedia This incomplete list is not intended to be exhaustive. This list corrects erroneous beliefs that are currently widely held about notable topics. Each misconception and the corresponding facts have been discussed in published literature. Note that each entry is formatted as a correction; the misconceptions themselves are implied rather than stated. Horrible Cards Horrible Cards are Copyright © 2012 Matthew Inman. Please don't steal. The Oatmeal

The Burning House Name: StefAge: 23Location: Adelaide, AustraliaOccupation: Sales, Accounting, Bookkeeping.Website: Instagram: @stefanieroj As someone who’s actually been through the ‘house is burning’ situation, there are very few thoughts that help you to process. You come to acknowledge that everything you once had were just things and nothing more, if only to help you heal. Singapores Online Community - Natures Weirdest Creatures here's some creatures which are weird as hell.. Seapig This is some kind of weird deep sea sea-cucumber. Top 10 gifts for your Girlfriend Gifts and Surprises: These two words are sure to get your girlfriend excited any time of the day, at any given hour. While the words may get the her excited and enthusiastic, the wrong choice of gift and/or surprise will cause her face to lose colour before you can begin to give any explanation. So before you run out of any ideas, or fall prey to cheesy ones or lose face by gifting her the wrong surprise, read our list of Top 10 Gifts for Your Girlfriend.

All-TIME 100 Movies You like us, you really like us. You also hate us. Anyway, you click on us, which is the surest way a website has of measuring interest in its content. The All-TIME 100 Movies feature—compiled by Richard Schickel and me, and handsomely packaged by Josh Macht, Mark Coatney and all the smart folks at TIME.com—attracted a record-busting 7.8 million page views in its first week, including 3.5 million on May 23rd, its opening daym, in time for Father’s Day. Thousands of readers have written in to cheer or challenge our selections, and thousands more have voted for their own favorites. The response simply underscores Richard’s and my long-held belief that everybody has two jobs: his own and movie critic.

The illustrated guide to a Ph.D. - StumbleUpon Imagine a circle that contains all of human knowledge: By the time you finish elementary school, you know a little: By the time you finish high school, you know a bit more: With a bachelor's degree, you gain a specialty: Gandhi wrote to Hitler... TWICE! It's hard to imagine 2 more contrasting historical figures. One is considered to be one of the most (if not *the* most) peaceful men in history, and the other will be hated forever for starting a war that killed 50 million people. By 1939, it seemed that the world was headed for a war of a really large scale. Thinking he could make a difference, Gandhi's friends urged him to write to Hitler and dissuade him from making the mistakes he was about to make. His letter was simple, to the point and only a couple of paragraphs long, Gandhi told Hitler that he was the one person who could prevent the war that could reduce humanity to savagery.