New Report: Major disruption in food and agriculture in next decade — RethinkX. RethinkX projects collapse of dairy & cattle industries by 2030 as animal meat is replaced by cheaper, higher quality food made from precision fermentation protein. 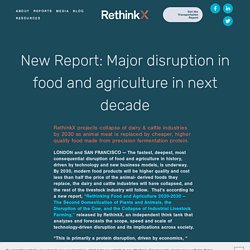 LONDON and SAN FRANCISCO — The fastest, deepest, most consequential disruption of food and agriculture in history, driven by technology and new business models, is underway. By 2030, modern food products will be higher quality and cost less than half the price of the animal- derived foods they replace, the dairy and cattle industries will have collapsed, and the rest of the livestock industry will follow. That’s according to a new report, “Rethinking Food and Agriculture 2020-2030 -- The Second Domestication of Plants and Animals, the Disruption of the Cow, and the Collapse of Industrial Livestock Farming,” released by RethinkX, an independent think tank that analyzes and forecasts the scope, speed and scale of technology-driven disruption and its implications across society. 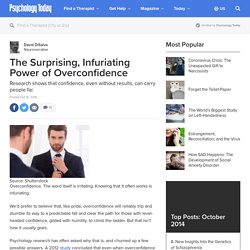 The word itself is irritating. Blog – Rodney Brooks. [An essay in my series on the Future of Robotics and Artificial Intelligence.] 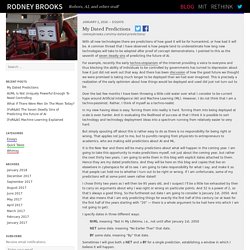 Much of the recent enthusiasm about Artificial Intelligence is based on the spectacular recent successes of machine learning, itself often capitalized as Machine Learning, and often referred to as ML. It has become common in the technology world that the presence of ML in a company, in a development process, or in a product is viewed as a certification of technical superiority, something that will outstrip all competition. Machine Learning is what has enabled the new assistants in our houses such as the Amazon Echo (Alexa) and Google Home by allowing them to reliably understand as we speak to them. Machine Learning is how Google chooses what advertisements to place, how it saves enormous amounts of electricity at its data centers, and how it labels images so that we can search for them with key words. 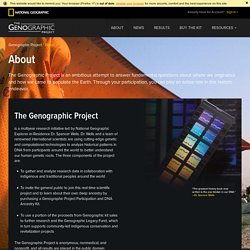 By regularly visiting the Genographic Project website at www.genographic.com, you can find out much more as Genographic scientists pull together connections, uncover new paths, and provide fresh insights into your ancestry. You’ll find informative graphics, interactive features, video, and news stories, and learn about the broader historical context of your results. If you choose to create a personal profile at www.genographic.com, you can share your story with Genographic Project participants, gain further insight into your lineages, and connect with others around the world who share your deep ancestry. Registering also enables you to receive email updates on the project, and ensures you can access your results if you happen to lose your anonymous participant ID at any time. Social Psychological Phenomena: Granfalloons etc. ...attribute the statement to Nostradamus and the dynamics change. 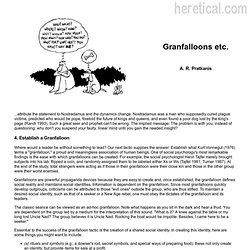 Nostradamus was a man who supposedly cured plague victims, predicted who would be pope, foretold the future of kings and queens, and even found a poor dog lost by the king's page (Randi 1993). Such a great seer and prophet can't be wrong. The implied message: The problem is with you; instead of questioning, why don't you suspend your faulty, linear mind until you gain the needed insight? 4. Establish a Granfalloon Where would a leader be without something to lead? Granfalloons are powerful propaganda devices because they are easy to create and, once established, the granfalloon defines social reality and maintains social identities. Bradley Manning and the Future of Punishment. 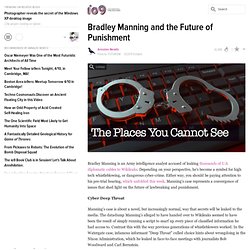 Kill the guy who revealed to the rest of America what lies their government had been keeping from them. I love how Americans are so ready to just string up the guy who finally pulled back the curtain on the horrific actions being taken in their name. You want to bitch about 'criticizing' president Karzai (whom Bush installed there) and then you say "The U.S. does not want to repeat its Cold War mistakes of aiding corrupt governments for political expediency.

" in regards to Ecuador. Deschooling Society by Ivan Illich. By Ivan Illich I owe my interest in public education to Everett Reimer. 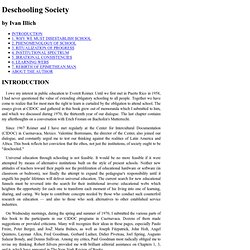 Until we first met in Puerto Rico in 1958, I had never questioned the value of extending obligatory schooling to all people. Together we have come to realize that for most men the right to learn is curtailed by the obligation to attend school. The essays given at CIDOC and gathered in this book grew out of memoranda which I submitted to him, and which we discussed during 1970, the thirteenth year of our dialogue. The last chapter contains my afterthoughts on a conversation with Erich Fromm on Bachofen's Mutterrecht. Since 1967 Reimer and I have met regularly at the Center for Intercultural Documentation (CIDOC) in Cuernavaca, Mexico. Universal education through schooling is not feasible. General - HUMANITIES AND THE LIBERAL ARTS.

WUJS Zionism and Israel Advocacy Guide. Writing this handbook has been a difficult task. 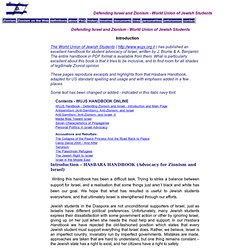 Trying to strike a balance between support for Israel, and a realisation that some things just aren’t black and white has been our goal. We hope that what has resulted is useful to Jewish students everywhere, and that ultimately Israel is strengthened through our efforts. Jewish students in the Diaspora are not unconditional supporters of Israel, just as Israelis have different political preferences. Unfortunately, many Jewish students express their dissatisfaction with some government action or other by ignoring Israel, giving up on her just when she needs the most help and support. In our Hasbara Handbook we have rejected the old-fashioned position which states that every Jewish student must support everything that Israel does.

That the Palestinian leadership has made some serious strategic mistakes is not in doubt. Lecture - The Invention of the Jewish People. Let's face it, the Jews have long been a troublesome people for the rest of the planet. 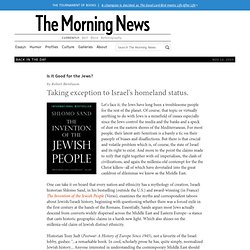 Of course, that topic or virtually anything to do with Jews is a minefield of issues especially since the Jews control the media and the banks and a speck of dust on the eastern shores of the Mediterranean. For most people, their latent anti-Semitism is a barely a tic on their panoply of biases and disaffections. But there is that crucial and volatile problem which is, of course, the state of Israel and its right to exist. And more to the point the claims made to reify that right together with oil imperialism, the clash of civilizations, and again the millenia-old contempt for the the Christ killers--all of which have dovetailed into the great cauldron of dilemmas we know as the Middle East. One can take it on board that every nation and ethnicity has a mythology of creation.

PearlTree Alternative - Graphing Religions and Income. Visual Economics - Financial Infographics &amp; More. Graphic Gallery: The US and China in Numbers - SPIEGEL ONLINE - News - International. Best of TED: Hans Rosling. Home. Gapminder.org - For a fact based world view. A possible declining trend for worldwide innovation. Muckety - Exploring the paths of power and influence. The Lights In the Tunnel - Table of Contents. PART 1 - Michael Pawlyn debate with Bjorn Lomborg at the BCO 2009 conference. Bjorn Lomborg: Our priorities for saving the world. 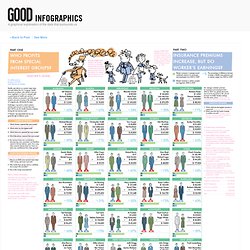 The DoubleThink - The Art &amp; Science of the New Marketing. Posted 2009.05.06 I was cleaning up my office yesterday when I stumbled across a little book called Why Yesterday Tells of Tomorrow, by Helmut Gaus. A friend gave it to me years ago and I smiled when I saw the cover again. Figures of Speech - Learn to Talk Like Bush!

(And Why You Should Want To) What you say: Oh Ginger, that was a bad thing. You’re a bad, bad dog, Ginger. What a dog hears: Blah Ginger, blah blah blah. Blah blah blah blah, Ginger. — "Far Side" CartoonWhat Bush says: And when you engage the terrorists abroad, it causes activity and action. What sticks in people’s minds: …engage the terrorists…activity…action. OnTheIssues.org - Candidates on the Issues. Rick Shenkman: How Are Lawyers Like Politicians? - Politics on The Huffington Post. Lawyers have to appeal to juries the way pols have to appeal to voters. And often they follow a similar approach.

Ask a good lawyer how they win over a jury and they'll say you have to create a narrative the jurors can easily follow.