Illustrating with Thread and Pins 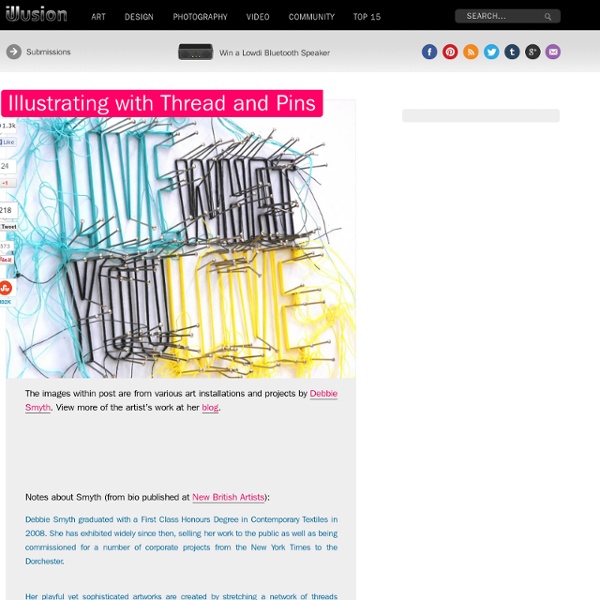 The images within post are from various art installations and projects by Debbie Smyth. View more of the artist’s work at her blog. Notes about Smyth (from bio published at New British Artists): Debbie Smyth graduated with a First Class Honours Degree in Contemporary Textiles in 2008. She has exhibited widely since then, selling her work to the public as well as being commissioned for a number of corporate projects from the New York Times to the Dorchester.Her playful yet sophisticated artworks are created by stretching a network of threads between accurately plotted pins. Leaving loose threads implies movement in the picture and Debbie has a keen eye for storytelling in a simple, contemporary manner. Artwork © Debbie Smyth Link via Designaside

Rashad Alakbarov Paints with Shadows and Light Artist Rashad Alakbarov from Azerbaijan uses suspended translucent objects and other found materials to create light and shadow paintings on walls. The best part is that you can easily create something similar at home – all you need is one or two lamps and some items from your desk. The stunning light painting below, made with an array of colored airplanes has found its way to exhibitions like the Fly to Baku at De Pury Gallery in London. Rashad adds, “Above the cloud with its shadow is the star with its light. Pouring Light Lamp by Yeongwoo Kim Pour Me Some Light Human actions play such a significant role in design; it’s either evident in the form or in the function. In the Pouring Light, the action is evident in the form and is delightfully executed as well! With the motive of giving off “an emotional flow of light”, the lights linger on with a mesmerizing effect thanks to the use of phosphorescence in the “water” part. Yeongwoo suggests the use of LED lights to conserve energy, and my suggestion to him: get this in the market ASAP!

Netflix Envelope Doodles Admit it, you've done it. You've taken a Sharpie to a Netflix envelope and doodled the heck out of it. Not just once, but a multitude of times. You've then imagined the expression of the postal worker as the envelope passed through their hands, all with a wide grin on your face. This is What Happens When You Give Thousands of Stickers to Thousands of Kids This December, in a surprisingly simple yet ridiculously amazing installation for the Queensland Gallery of Modern Ar, artist Yayoi Kusama constructed a large domestic environment, painting every wall, chair, table, piano, and household decoration a brilliant white, effectively serving as a giant white canvas. Over the course of two weeks, the museum’s smallest visitors were given thousands upon thousands of colored dot stickers and were invited to collaborate in the transformation of the space, turning the house into a vibrantly mottled explosion of color. How great is this?

This Awesome Urn Will Turn You into a Tree After You Die You don't find many designers working in the funeral business thinking about more creative ways for you to leave this world (and maybe they should be). However, the product designer Gerard Moline has combined the romantic notion of life after death with an eco solution to the dirty business of the actual, you know, transition. His Bios Urn is a biodegradable urn made from coconut shell, compacted peat and cellulose and inside it contains the seed of a tree. 2011′s Pictures Of The Year December 24, 2011 | 3 Comments » | Topics: Best Of , Pics Loading ... Hot Stories From Around The Web Other Awesome Stories