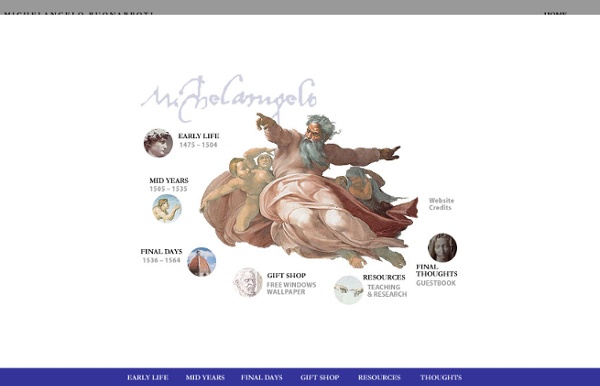 The Seven Works of Mercy (Caravaggio) The Seven Works of Mercy (Italian: Sette opere di Misericordia), also known as The Seven Acts of Mercy, is an oil painting by Italian painter Caravaggio, circa 1607. The painting depicts the seven corporal works of mercy in traditional Catholic belief, which are a set of compassionate acts concerning the material welfare of others. The painting was made for, and is still housed in, the church of Pio Monte della Misericordia in Naples. Originally it was meant to be seven separate panels around the church; however, Caravaggio combined all seven works of mercy in one composition which became the church's altarpiece. The painting is better seen from il "coreto" (little choir) in the first floor. The titular seven works/acts of mercy are represented in the painting as follows:

most popular artists The most popular artist searches last month: a not-to-be-taken-too-seriously measurement of which famous artists have the greatest "mindshare" in our collective culture. Moving up: Edgar Degas (#22 to #12), Titian (#28 to #18), and realist painter Janet Fish (appearing for the first time on the list at #29). Moving down: Joan Miro (#13 to #19), Wassily Kandinsky (#11 to #24) and Paul Gauguin (#21 down to #32). How we measure popularity: In order to eliminate any kind of selection bias due to search engine ranking, external links, etc., we only count internal links from our own search box and our artist listings.

Allegory of the Cave Plato realizes that the general run of humankind can think, and speak, etc., without (so far as they acknowledge) any awareness of his realm of Forms. The allegory of the cave is supposed to explain this. In the allegory, Plato likens people untutored in the Theory of Forms to prisoners chained in a cave, unable to turn their heads. All they can see is the wall of the cave. Architecture Imagine the renovation dilemmas. A huge penthouse of a converted 1930s office building in TriBeCa, New York, is to be turned into a functioning home for a family with three teenagers. In fact, we can not quite imagine the issues that faced Steven Harris Architects when the family showed up, literally, at the doorstep of the celebrated architect and asked if he’d like to work on their home. Harris said yes and proceeded to make his magic. The scale of the apartment is huge and the freedom from budget constraints allowed for some spectacular solutions. Harris’s work is often distinguished by clarity and light, by the use of glass, by the maximization of views and, above all, bold solutions.

Ancient Roman History Timeline Provides a chronological index of the history of Ancient Rome with extensive links to internet resources. Emphasis is placed upon the use of primary source material, numismatics, and a focus upon the roles of women in ancient time. scroll down for the timeline "Dear Mr. Rockwell: You painted one of my sons black." From the Norman Rockwell fan mail archive: “Dear Mr. Rockwell, Let me start this letter by telling you that I am the mother of two of the boys that posed for the 1974 Boy Scout Calendar. “This is a very difficult letter to write as my boys happen to be twins and you painted one of them ‘black.’ Of course, they are both ‘white.’ aremisia gentileshi Artemisia GentileschiThe Art History Archive - Biography & Art This Website is Best Viewed Using Firefox Biography of Artemisia Gentileschi: (Born July 8th 1593, Died 1653) Artemisia Gentileschi was the most important woman painter of Early Modern Europe by virtue of the excellence of her work, the originality of her treatment of traditional subjects, and the number of her paintings that have survived (though only thirty-four of a much larger corpus remain, many of them only recently attributed to her rather than to her male contemporaries).