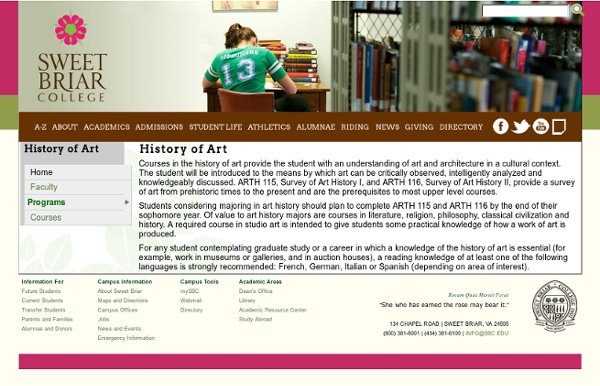 Courses in the history of art provide the student with an understanding of art and architecture in a cultural context. The student will be introduced to the means by which art can be critically observed, intelligently analyzed and knowledgeably discussed. ARTH 115, Survey of Art History I, and ARTH 116, Survey of Art History II, provide a survey of art from prehistoric times to the present and are the prerequisites to most upper level courses. Students considering majoring in art history should plan to complete ARTH 115 and ARTH 116 by the end of their sophomore year. For any student contemplating graduate study or a career in which a knowledge of the history of art is essential (for example, work in museums or galleries, and in auction houses), a reading knowledge of at least one of the following languages is strongly recommended: French, German, Italian or Spanish (depending on area of interest).

10 Cool & Interesting Web Applications On Fonts & Typography Typography is art in its truest sense, and the web has certainly made it more mainstream. Choosing the right fonts and a theme to go with it are joined at the hip when it comes to web design. The right combination gives us a web design that spells ‘wow’. Not all of us are graphic designers or art directors; but that shouldn’t stop us from exploring the wonderful world of typography. Typefaces and fonts are just a part of it. There are varied web applications and websites that can help perk up your interest. Explore these ten websites…some of them are practical tools and some are just cool. Flipping Typical When you first land here you won’t immediately grasp what it is about. You can also try the similar STC fontBrowser 2.0 online tool to view the active fonts on your system. TypeNavigator You have seen a font somewhere but can’t exactly place the name of the typeface. Identifont This web app gives you two routes to get to an obscure font. Typechart We Love Typography Typedia Typetester

Other Ancient Calendars When did ancient months start? In the eighth century B.C.E., civilizations all over the world either discarded or modified their old 360 day calendars. The 360 day calendars had been in use for the greater part of a millennium. In many places, month lengths immediately after that change were not fixed, but were based instead upon observation of the sky. Priest-astronomers were assigned the duty of declaring when a new month began – it was usually said to have started at the first sighting of a new moon. During those years in Rome, for example, a Pontifex (priest) observed the sky and announced a new moon and therefore the new month to the king. This practice of starting a month at the first sighting of a new moon was observed not only by Romans but by Celts and Germans in Europe and by Babylonians and Hebrews in the Lavant. During the period when month lengths were not fixed, new moons were usually sighted after either 29 or 30 days. When was the ancient new year? Babylonian calendar Iran

Paper Flowers - Anyone Can Do That | FindInspirations.com Japanese Kusudama, this tutorial is featured on Craftuts Anyone can do that, I assure you. The proof: I can, just take a quick look at my result below. Below you can see my very first attempt to create paper flowers. What you will need to make your own Kusudama paper ball? 1. 3. 4. (optionally) I prefer torn paper instead of cut. You have to start with a single petal. Now you have to glue your 5 petals into a flower. Apply the glue to only one side of each petal, except for the last one, in this case cover both sides with glue. Your first flower is done. Don’t glue every petal right after you make it. When all 12 flowers are finished you have to glue them together. When two halves of Kusudama Flower Ball are ready you have to glue them together.

Download Free Fonts Temple Of Karnak, engraved wall Part of the Holy Land, Egypt offers a fascinating mixture of ancient pyramids, temples and other religious monuments. There are numerous possibilities to explore Egypt from desert treks to trips down the Nile or scuba diving in the Red Sea and along the Sinai coast. Cairo, which means “The Triumphant”, is home to the pyramids, sphinx and over 17 million residents within its metropolitan area.

PHI: The Divine Ratio PHI & Five PHIve-sided Symmetry The easiest way to figure PHI is with a simple pentagon, the geometric figure with five equal sides meeting at five equal angles. This five-sided figure embodies PHI. Most simply and precisely, PHI is the ratio of any diagonal to any side of a pentagon. Draw a regular pentagon ABCDE, with equal sides and equal angles. Then draw a diagonal as line AC (red) connecting any two vertexes of the pentagon. This ratio is an accurate value for PHI. You can install five such diagonal lines, and they are all of equal length. Here we encounter PHI's first curious quirk. Each diagonal is divided into two parts, and each part is in PHI ratio to the other, and to the whole diagonal. When you draw all five pentagon diagonals, they form a five-point star: a Pentangle. Inside this star is a smaller, inverted pentagon (green). Thus, PHI is the ratio of five-sided symmetry. Extreme & MeanResonant Recursion PHI is also found in another much more obscure and obtuse relationship.