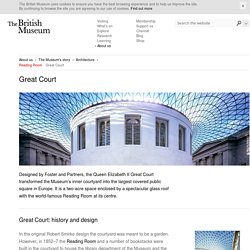 The Sainsbury Galleries house a display of objects from the Museum's Africa collection. The Wellcome Trust Gallery is home to a series of long term, cross-cultural, thematic exhibitions, currently based around Living and Dying. In addition to this a new space for temporary exhibitions, Room 35, was also built. Education facilities Housed in the lower level of the Great Court, the Clore Education Centre comprises the: BP Lecture Theatre Hugh and Catherine Stevenson Theatre Raymond and Beverly Sackler seminar room Studio, used for art and craft activities Claus Moser seminar room Ford Centre for Young Visitors Samsung Digital Discovery Centre The Clore Education Centre has enabled the Museum to expand its educational role. Five additional multi-purpose rooms are also used for other programmes ranging from informal 'drop-in' sessions to courses for the general public and teacher training.

Visitor facilities Forecourt. General history. The British Museum was founded in 1753, the first national public museum in the world. 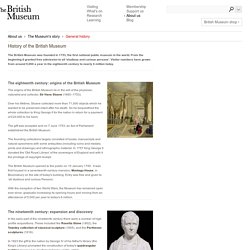 From the beginning it granted free admission to all 'studious and curious persons'. Visitor numbers have grown from around 5,000 a year in the eighteenth century to nearly 6 million today. Museum of London. Art - home. The Courtauld Gallery, London, UK. Saatchi Gallery. Visit The Queen's Gallery, Buckingham Palace. THE BRICK LANE GALLERY LONDON. Whitechapel Gallery - the artists’ gallery for everyone. Lisson Gallery. 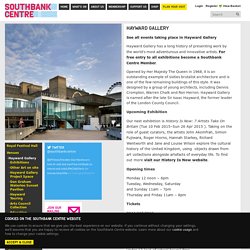 For free entry to all exhibitions become a Southbank Centre Member. Opened by Her Majesty The Queen in 1968, it is an outstanding example of sixties brutalist architecture and is one of the few remaining buildings of this style. It was designed by a group of young architects, including Dennis Crompton, Warren Chalk and Ron Herron. Hayward Gallery is named after the late Sir Isaac Hayward, the former leader of the London County Council. Upcoming Exhibition Our next exhibition is History Is Now: 7 Artists Take On Britain (Tue 10 Feb 2015–Sun 26 Apr 2015 ). 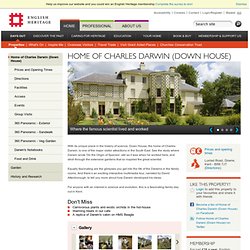 See the study where Darwin wrote 'On the Origin of Species', still as it was when he worked here, and stroll through the extensive gardens that so inspired the great scientist. Equally fascinating are the glimpses you get into the life of the Darwins in the family rooms. And there’s an exciting interactive multimedia tour, narrated by David Attenborough, to tell you more about how Darwin developed his ideas. For anyone with an interest in science and evolution, this is a fascinating family day out in Kent. Don't Miss Carnivorous plants and exotic orchids in the hot-house Warming treats in our cafe A replica of Darwin's cabin on HMS Beagle Flicker Events At Home of Charles Darwin (Down House) Down House Garden Tours Every Weds and Sun in July and August Enjoy an hour long tour of the gardens of Down House. Shop and Publications 1-3 of 3 items. 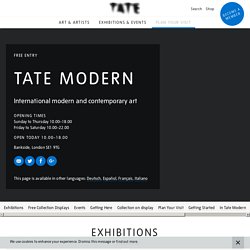 Routes 45, 63 and 100 stop on Blackfriars Bridge Road Routes RV1 and 381 stop on Southwark Street Route 344 stops on Southwark Bridge Road Blackfriars 300 metres from the South exit; 800 metres from the North exit. London Bridge 1,100 metres approx. The Tate Boat runs every forty minutes along the Thames between Tate Britain and Tate Modern. Other river services run between Millbank Pier and Bankside Pier. Cycle Hire Docking Stations are located on New Globe Street and Southwark Street. A drop off / pick up point is situated on Holland Street, just outside the main entrance. There are no parking facilities at Tate Modern or in the surrounding streets. A drop off / pick up point is situated on Southwark Street, a short walk from the main entrance. Victoria and Albert Museum. Natural History Museum. Science Museum.