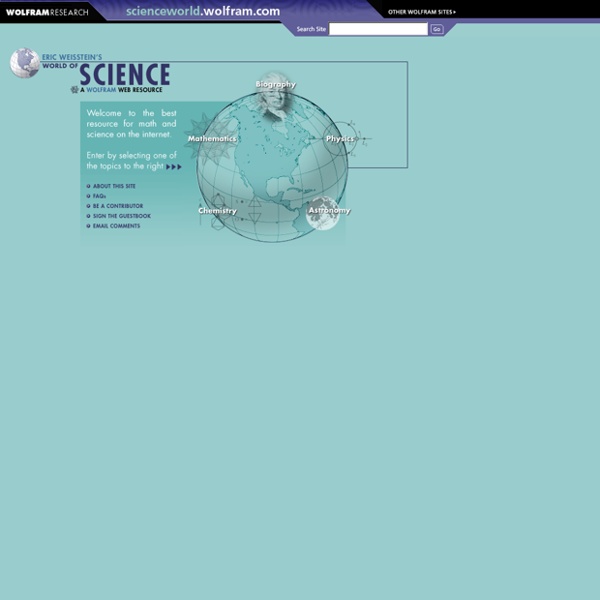 What Causes Tsunamis A large rupture, or split, below the seafloor causes an earthquake. A huge block of seabed is thrust upward. This in turn pushes up the seawater, triggering a tsunami. The epicenter is the spot on the seafloor above the point in Earth’s interior where the earthquake started. Fault line Nanotechnology summary Just give me the FAQ The next few paragraphs provide a brief introduction to the core concepts of nanotechnology, followed by links to further reading. Manufactured products are made from atoms. The properties of those products depend on how those atoms are arranged. If we rearrange the atoms in coal

11 cheap gifts guaranteed to impress science geeks Science comes up with a lot of awesome stuff, and you don't need a Ph.D, a secret lab, or government funding to get your hands on some of the coolest discoveries. We've got a list of 11 mostly affordable gifts that are guaranteed to blow your mind, whether or not you're a science geek. Click on any image to see it enlarged. 1. Aerogel Also known as frozen smoke, Aerogel is the world's lowest density solid, clocking in at 96% air. OBSCURA DIGITAL Shines 940,000 Lumens in the Desert and it is Spectacular Earlier this month Obscura Digital used TouchDesigner to once again raise the bar of large scale architectural mapping and projection design, this time for the 40th Anniversary of the United Arab Emirates National Day Celebration at the Sheikh, Zayed Grand Mosque in Abu Dhabi. The sheer scale of this production was mindboggling with 49 projectors used to project on a total surface measuring 19,474 square meters which included 4 minarets and 12 domes necessitating "detailed accuracy of 3-D mapping and content quality on incredibly complex geometry of flat walls with intricate hand carved details and arcades with rows of columns." Interactive developer and artist Mary Franck who worked on the project for the duration had this to say: "It was certainly a dream projection-mapping job: incredible architecture, all white marble, completely artistic and cultural content. It was absolutely an honor to be a part of it. We pulled it all altogether in record time.

Support for High School Science particules de savoir Math, Physics, and Engineering Applets Oscillations and Waves Acoustics Signal Processing Valaan villapaita: Tee se itse -valas You can find the tutorial in English here. ETA in February 2012: Hi! Nice of you to stop by! We come from the future. This is, for the most part, an accurate article, except for a few statements. "Exactly what makes a fermion a fermion is a bit complicated, but suffice it to say that fermions are all the particles that deal with matter. So what about the last group of elementary particles, the ones that don't deal with matter? These are the bosons, and they deal with the fundamental forces of the universe." The statements above can be misinterpreted as suggesting that fermions are defined as particles that deal with matter and bosons are defined as particles that deal with forces.