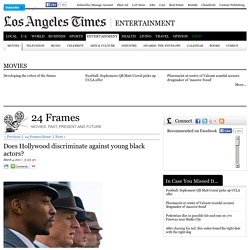 Jackson sent an e-mail to a Times reporter wondering why no black men had been chosen to present awards on the film world's biggest stage. "It's obvious there's not ONE Black male actor in Hollywood that's able to read a teleprompter, or that's 'hip enuf,' for the new academy demographic! " Jackson wrote. "In the Hollywood I saw tonite, I don't exist nor does Denzel, Eddie, Will, Jamie, or even a young comer like Anthony Mackie! " Jackson may be on to something, at least when it comes to the young comers. There is still a sizable number of black actors in Hollywood with box-office clout and meaty roles, a point that will be underscored when the NAACP hands out its annual Image Awards in Los Angeles Friday night. But most of the prominent male black stars sit on the other side of 40. That's not because any of these actors aren't capable of pulling off a "Malcolm X" or a "Philadelphia," of course.

--Steven Zeitchik Twitter.com/ZeitchikLAT. I Recorded the Racist Things People Did to Me For 2 Weeks – And Here's the Result. The Real Problem With SNL and Casting Black Women - Kerry Coddett. An Essence survey published last month revealed what many black women already know: Pop culture doesn’t depict them accurately. 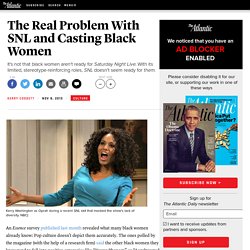 The ones polled by the magazine (with the help of a research firm) said the other black women they know tend to fall into positive categories like “Young Phenom” or “Acculturated Girl Next Door.” But images of black women “on TV, in social media, in music videos and from other outlets,” the survey found, were “overwhelmingly negative,” conforming to stereotypes like “Gold Diggers, Modern Jezebels, Baby Mamas, Uneducated Sisters, Ratchet Women, Angry Black Women, Mean Black Girls, Unhealthy Black Women, and Black Barbies.” Had it been included, last week’s Saturday Night Live episode would have made the findings even starker. Scandal star Kerry Washington appeared in sketches as a nagging girlfriend; a sassy, eye-rolling assistant; and a rageful Ugandan beauty queen. There were no roles where her race and gender wasn’t an issue.

The Incoherent Backlashes to Black Actors Playing 'White' Superheroes - Noah Berlatsky. Comics have a history of altering characters' races and ethnicities, but outcry over Michael B. 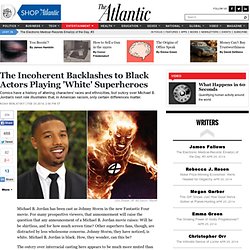 Jordan's next role illustrates that, in American racism, only certain differences matter. Michael B. Jordan has been cast as Johnny Storm in the new Fantastic Four movie. For many prospective viewers, that announcement will raise the question that any announcement of a Michael B. Jordan movie raises: Will he be shirtless, and for how much screen time?

The outcry over interracial casting here appears to be much more muted than the stir over Idris Elba's role as Heimdall in the Thor franchise, which provoked boycott threats. People say they object to black casting because it's untrue to the original source material, and a betrayal of the characters—a claim that seems particularly dicey in the case of The Hunger Games, where Rue is black in the original novel. The Little Mermaid's Twisted, Sofia Coppola-esque Origins - Noah Gittell. Forget the Disney movie. 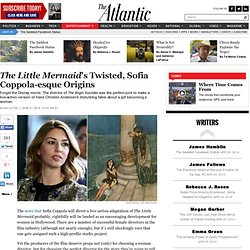 The director of The Virgin Suicides was the perfect pick to make a live-action version of Hans Christen Andersen's disturbing fable about a girl becoming a woman. The news that Sofia Coppola will direct a live-action adaptation of The Little Mermaid probably, rightfully will be lauded as an encouraging development for women in Hollywood. There are a number of successful female directors in the film industry (although not nearly enough), but it’s still shockingly rare that one gets assigned such a high-profile studio project. Yet the producers of the film deserve props not (only) for choosing a woman director, but for choosing the perfect director for the story they’re going to tell. Coppola’s films are known for their aesthetic beauty and moody, dream-like atmosphere. Must Every YA Action Heroine Be Petite? - Julianne Ross.

From Divergent's Tris to The Hunger Games' Katniss, the women of young-adult fiction can be strong, independent, and mature—as long as they're also scrawny. 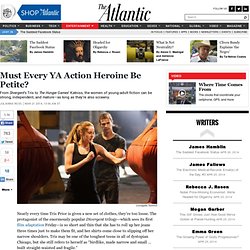 Lionsgate; Summit Nearly every time Tris Prior is given a new set of clothes, they’re too loose. The protagonist of the enormously popular Divergent trilogy—which sees its first film adaptation Friday—is so short and thin that she has to roll up her jeans three times just to make them fit, and her shirts come close to slipping off her narrow shoulders. Tris may be one of the toughest teens in all of dystopian Chicago, but she still refers to herself as “birdlike, made narrow and small … built straight-waisted and fragile.” When it comes to recent young adult sci-fi and fantasy literature, this is typical.

In Mortal Instruments, for example, Clary Frayis “delicate” and “slender,” with a small chest and “narrow hips.”