Moral Philosophy » Prescriptivism. Website- Objective vs subjective ltr.pdf. Objective vs. Subjective in Philosophy and Religion. Metaethics [Internet Encyclopedia of Philosophy] Metaethics is a branch of analytic philosophy that explores the status, foundations, and scope of moral values, properties, and words. 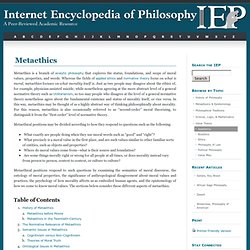 Whereas the fields of applied ethics and normative theory focus on what is moral, metaethics focuses on what morality itself is. Just as two people may disagree about the ethics of, for example, physician-assisted suicide, while nonetheless agreeing at the more abstract level of a general normative theory such as Utilitarianism, so too may people who disagree at the level of a general normative theory nonetheless agree about the fundamental existence and status of morality itself, or vice versa. In this way, metaethics may be thought of as a highly abstract way of thinking philosophically about morality. For this reason, metaethics is also occasionally referred to as “second-order” moral theorizing, to distinguish it from the “first-order” level of normative theory.  What exactly are people doing when they use moral words such as “good” and “right”? 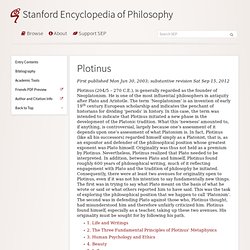 He is one of the most influential philosophers in antiquity after Plato and Aristotle. The term ‘Neoplatonism’ is an invention of early 19th century European scholarship and indicates the penchant of historians for dividing ‘periods’ in history. In this case, the term was intended to indicate that Plotinus initiated a new phase in the development of the Platonic tradition.

What this ‘newness’ amounted to, if anything, is controversial, largely because one’s assessment of it depends upon one's assessment of what Platonism is. 1. Owing to the unusually fulsome biography by Plotinus' disciple Porphyry, we know more about Plotinus' life than we do about most ancient philosophers'. Plotinus was born in Lycopolis, Egypt in 204 or 205 C.E. Porphyry's biography reveals a man at once otherworldly and deeply practical. CE notes 9.16.14. Aristotle's Ethics. First published Tue May 1, 2001; substantive revision Mon Mar 29, 2010 Aristotle conceives of ethical theory as a field distinct from the theoretical sciences. 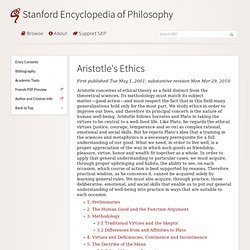 Its methodology must match its subject matter—good action—and must respect the fact that in this field many generalizations hold only for the most part. We study ethics in order to improve our lives, and therefore its principal concern is the nature of human well-being. Aristotle follows Socrates and Plato in taking the virtues to be central to a well-lived life. Like Plato, he regards the ethical virtues (justice, courage, temperance and so on) as complex rational, emotional and social skills. 1. Aristotle wrote two ethical treatises: the Nicomachean Ethics and the Eudemian Ethics. Though the general point of view expressed in each work is the same, there are many subtle differences in organization and content as well. Consequentialism [Internet Encyclopedia of Philosophy] Consequentialism is the view that morality is all about producing the right kinds of overall consequences. 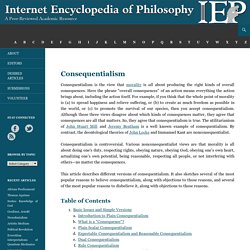 Here the phrase “overall consequences” of an action means everything the action brings about, including the action itself. For example, if you think that the whole point of morality is (a) to spread happiness and relieve suffering, or (b) to create as much freedom as possible in the world, or (c) to promote the survival of our species, then you accept consequentialism. Although those three views disagree about which kinds of consequences matter, they agree that consequences are all that matters. 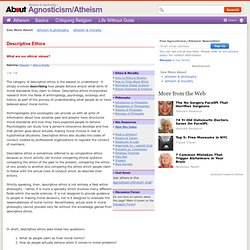 The category of descriptive ethics is the easiest to understand - it simply involves describing how people behave and/or what sorts of moral standards they claim to follow. Descriptive ethics incorporates research from the fields of anthropology, psychology, sociology and history as part of the process of understanding what people do or have believed about moral norms.

Anthropologists and sociologists can provide us with all sorts of information about how societies past and present have structured moral standards and how they have expected people to behave. Psychologists can study how a person's conscience develops and how that person goes about actually making moral choices in real or hypothetical situations. Stoic Ethics [Internet Encyclopedia of Philosophy] The tremendous influence Stoicism has exerted on ethical thought from early Christianity through Immanuel Kant and into the twentieth century is rarely understood and even more rarely appreciated. 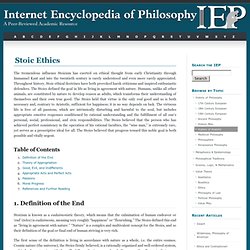 Throughout history, Stoic ethical doctrines have both provoked harsh criticisms and inspired enthusiastic defenders. The Stoics defined the goal in life as living in agreement with nature. Humans, unlike all other animals, are constituted by nature to develop reason as adults, which transforms their understanding of themselves and their own true good. The Stoics held that virtue is the only real good and so is both necessary and, contrary to Aristotle, sufficient for happiness; it in no way depends on luck. 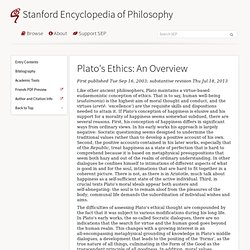 Preliminaries If ethics is the most accessible branch of philosophy, it is so because many of its presuppositions seem to be truisms. To name just a few: All human actions serve some end or purpose. Whether these purposes are judged right or wrong depends on their overall aims.