Terrorism and social media. Due to the convenience, affordability, and broad reach of social media platforms such as YouTube, Facebook and Twitter, terrorist groups have increasingly used social media to further their goals and spread their message. 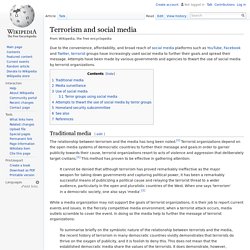 Attempts have been made by various governments and agencies to thwart the use of social media by terrorist organizations. Traditional media[edit] The relationship between terrorism and the media has long been noted.[1] Terrorist organizations depend on the open media systems of democratic countries to further their message and goals.In order to garner publicity towards their cause, terrorist organizations resort to acts of violence and aggression that deliberately target civilians.[1] This method has proven to be effective in gathering attention: While a media organization may not support the goals of terrorist organizations, it is their job to report current events and issues. Media surveillance[edit] The five reasons behind PayPal's split from eBay. 2: Shareholder pressure EBay insists it decided to split after conducting its own “thorough review”, but it is not kidding anyone. 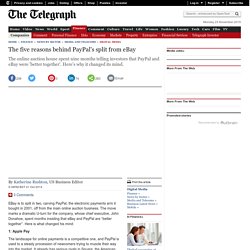 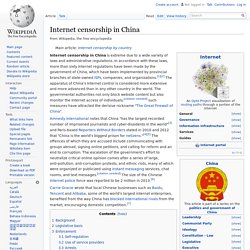 In accordance with these laws, more than sixty Internet regulations have been made by the government of China, which have been implemented by provincial branches of state-owned ISPs, companies, and organizations.[1][2] The apparatus of China's Internet control is considered more extensive and more advanced than in any other country in the world. The governmental authorities not only block website content but also monitor the Internet access of individuals;[citation needed] such measures have attracted the derisive nickname "The Great Firewall of China".

Amnesty International notes that China "has the largest recorded number of imprisoned journalists and cyber-dissidents in the world"[3] and Paris-based Reporters Without Borders stated in 2010 and 2012 that "China is the world's biggest prison for netizens. Background[edit] How Technology Changed American Politics in the Internet Age. Web 2.0: the new election superweapon.

The phrase is fast becoming the most overused cliche of the 2010 election, yet it all starts from a misunderstanding. 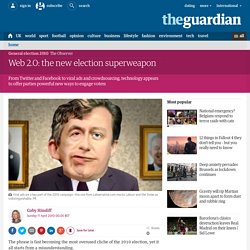 When the pollster Deborah Mattinson predicted a "Mumsnet election", endless speculation about middle-class mothers' voting plans followed. But what really interested her was the way the parenting website is changing political debate. Mumsnet's infamous webchats force politicians to address parents as equals, on issues of Mumsnetters' choosing: with other social media it has, Mattinson thinks, given ordinary women the confidence to challenge politicians in new ways. WikiLeaks (@wikileaks) IANA — Root Servers. The authoritative name servers that serve the DNS root zone, commonly known as the “root servers”, are a network of hundreds of servers in many countries around the world. 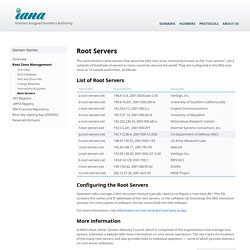 They are configured in the DNS root zone as 13 named authorities, as follows. DNS Root Servers: The most critical infrastructure on the internet. All System administrators have their own favorite topics, which they enjoy working with. 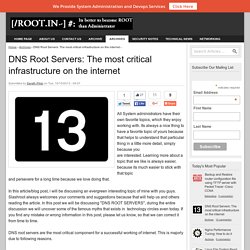 Its always a nice thing to have a favorite topic of yours because that helps to understand that particular thing in a little more detail, simply because youare interested. Learning more about a topic that we like is always easier, because its much easier to stick with that topicand persevere for a long time because we love doing that. In this article/blog post, i will be discussing an evergreen interesting topic of mine with you guys. Slashroot always welcomes your comments and suggestions because that will help us and others reading the article. Twitter Revolution. The term Twitter Revolution refers to different revolutions and protests, all of which were coordinated using the social networking site Twitter to plan the protests, mobilize the demonstrators and update the news to all around the world:[1] 2009 Moldova civil unrest, claiming that the elections, which saw the governing Party of Communists of the Republic of Moldova (PCRM) win a majority of seats, were fraudulent2009–2010 Iranian election protests, also known as Green Revolution and Facebook Revolution, following the 2009 Iranian presidential election2010–2011 Tunisian revolution, also known as Jasmine Revolution and Wikileaks Revolution, in which the regime of Zine El Abidine Ben Ali was ended after 23 yearsEgyptian Revolution of 2011, in which the regime of Hosni Mubarak was ended after 30 yearsEuromaidan Revolution in Ukraine, beginning in November 2013. 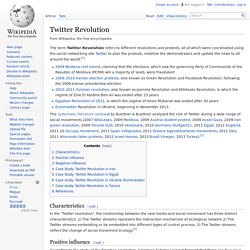 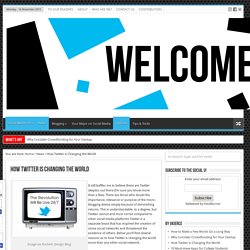 There are those who doubt the importance, relevance or purpose of the micro-blogging device simply because of diminishing returns. This is understandable, to a degree, but Twitter cannot and must not be compared to other social media platforms Twitter is a separate beast that has inspired the creation of some social networks and threatened the existence of others.

Below you’ll find several reasons as to how Twitter is changing the world more than any other social network. First and foremost, it has provided freedom of expression for the public masses through a cheap (free) format. In recent years, the Media has paid particular attention to individuals’ Tweeting their thoughts and their reactions. Athletes, celebrities, government & business officials, organizations and institutions don’t really issue press statements anymore. Our virtual existence in 2035. The Decline of Wikipedia: Even As More People Than Ever Rely on It, Fewer People Create It. The sixth most widely used website in the world is not run anything like the others in the top 10. 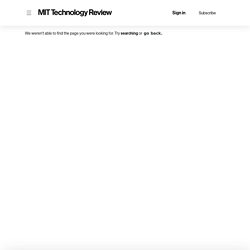 It is not operated by a sophisticated corporation but by a leaderless collection of volunteers who generally work under pseudonyms and habitually bicker with each other. It rarely tries new things in the hope of luring visitors; in fact, it has changed little in a decade. And yet every month 10 billion pages are viewed on the English version of Wikipedia alone. When a major news event takes place, such as the Boston Marathon bombings, complex, widely sourced entries spring up within hours and evolve by the minute. Internet monopolies: Everybody wants to rule the world. “WE ARE taking over the world of yoga.” 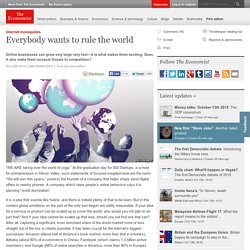 Par exemple, il devient capable de reconnaître un chat dans une vidéo sur internet, dès lors qu’il a "appris" ce qu’était un chat. Au-delà de la technique, la dynamique est intéressante car elle illustre bien les tendances "monopolistiques" d’internet. Intéressé par cet auteur ? Aaron Sorkin’s Huffington Post criticism gets it right. Christopher Polk/Getty Images During a panel discussion earlier this week previewing the new TV season, I worried, in regard to journalism, that “the metabolism of the Web is making us stupid.” Aaron Sorkin is equally concerned — and just as accurate — when he suggests the same culture is making us nastier as well. Now, I’ve been among the chorus of critical voices regarding Sorkin’s HBO series, “The Newsroom.” Six degrees of aggregation (about Huffington Post) Of the many and conflicting stories about how The Huffington Post came to be—how it boasts 68 sections, three international editions (with more to come), 1.2 billion monthly page views and 54 million comments in the past year alone, how it came to surpass the traffic of virtually all the nation’s established news organizations and amass content so voluminous that a visit to the website feels like a trip to a mall where the exits are impossible to locate—the earliest and arguably most telling begins with a lunch in March 2003 at which the idea of an online newspaper filled with celebrity bloggers and virally disseminated aggregated content did not come up.

The invitation for the lunch came from Kenneth Lerer. He was 51 and casting about for something new, having recently left his position as executive vice president for communications at AOL. He brought the book with him and Watts would recall that the copy was dog-eared, the flatteringly telltale sign of a purposeful read. 1. Connected. Napster’s Impact on the Music Industry Documented in ‘Downloaded: The Digital Revolution’ Story%20of%20a%20revolution Napster%20and%20the%20Music%20Industry. 1996: where the online music revolution began › Science Features (ABC Science) In Depth › Science Features. The future of the internet: A virtual counter-revolution. Has the digital revolution really changed the music industry? Site stats of Twitter.com. U.S. v. Microsoft: Timeline. United States v. Microsoft Corp. United States v. Microsoft Corporation 253 F.3d 34 (D.C.

Cir. 2001) is a U.S. antitrust law case, ultimately settled by the Department of Justice, where Microsoft Corporation was accused of becoming a monopoly and engaging in abusive practices contrary to the Sherman Antitrust Act 1890 sections 1 and 2. It was initiated on May 18, 1998 by the United States Department of Justice (DOJ) and 20 states. Joel I. The 20-year rise and fall of Microsoft Windows, from 1995 to now. The mass shooting in Oregon prompted an angry response from US president Barack Obama. How Microsoft Works. History of Microsoft. Microsoft logo since August 23, 2012. Edge.org. Collective intelligence. Types of collective intelligence Collective intelligence is shared or group intelligence that emerges from the collaboration, collective efforts, and competition of many individuals and appears in consensus decision making.

The term appears in sociobiology, political science and in context of mass peer review and crowdsourcing applications. It may involve consensus, social capital and formalisms such as voting systems, social media and other means of quantifying mass activity. Collective IQ is a measure of collective intelligence, although it is often used interchangeably with the term collective intelligence. Collective intelligence has also been attributed to bacteria[1] and animals.[2] How Internet Infrastructure Works. How Does the Internet Work? © 2002 Rus Shuler @ Pomeroy IT Solutions, all rights reserved. The world's 50 most powerful blogs. Subculture. Hippie, also spelled hippy, Hippie. Woodstock. Silicon Valley. 5 reasons why knowledge is better than wealth.