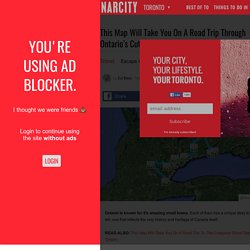 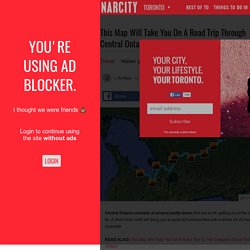 A short drive north will bring you to quiet but communities with a whole lot of charm and character. The 10 Most Amazing Travel Destinations In Ontario. Ontario is one of the most picturesque provinces in Canada. 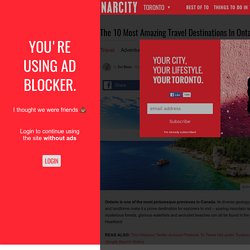 Its diverse geology and landforms make it a prime destination for explorers to visit – soaring mountain ranges, mysterious forests, glorious waterfalls and secluded beaches can all be found in the Heartland. READ ALSO: This Hilarious Twitter Account Pretends To Tweet Out Justin Trudeau’s Google Search History For your next Ontario road trip, you’re going to want to consider these 10 amazing travel destinations within the province: Sleeping Giant The Sleeping Giant is a massive landform in the Thunder Bay area that offers some of the most breathtaking views of Lake Superior.

The Blue Mountains The Blue Mountains is a community in Grey Country that is most famously known for its winter ski resort. 17 Places To Road Trip In Ontario With Your BFF's This Summer. Summer is coming and not fast enough! 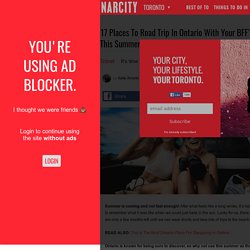 After what feels like a long winter, it’s hard to remember what it was like when we could just bask in the sun. Lucky for us, there are only a few months left until we can wear shorts and take lots of trips to the beach. 13 Ontario Towns You've Never Heard Of But Must Visit At Least Once. We all know Toronto is a busy city and sometimes, it’s nice to get away from the chaos. 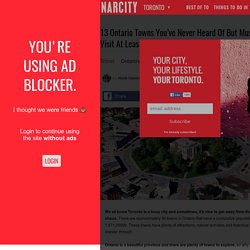 There are approximately 90 towns in Ontario that have a cumulative population of 1,871,05090. These towns have plenty of attractions, natural wonders and historical sites to wander through. Ontario is a beautiful province and there are plenty of towns to explore, so why not take a road trip to discover them? Here’s a list of 13 Ontario towns you probably haven’t heard of that are totally worth a visit: Read also: 12 Fairy Tale Places In Canada You Must Visit Photo cred – @tripadvisor. These Expert Writing Tips Will Guarantee Your Blog Posts Get Read. BuzzSumo: Find the Most Shared Content and Key Influencers.

Exploring Graffiti Alley in Toronto. This weekend is a long weekend in Canada, and instead of leaving the city like most people do, I decided to have a bit of a staycation in Toronto. 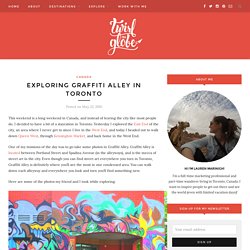 Yesterday I explored the East End of the city, an area where I never get to since I live in the West End, and today I headed out to walk down Queen West, through Kensington Market, and back home in the West End. One of my missions of the day was to go take some photos in Graffiti Alley. Graffiti Alley is located between Portland Street and Spadina Avenue (in the alleyways), and is the mecca of street art in the city. Even though you can find street art everywhere you turn in Toronto, Graffiti Alley is definitely where you’ll see the most in one condensed area.

You can walk down each alleyway and everywhere you look and turn you’ll find something new. Here are some of the photos my friend and I took while exploring. I also visited this mural located at Bloor Street West and Shaw Street at Studio 835. Exploring Toronto's Graffiti Alley: A Photo Essay » Brittany Thiessen. Graffiti Alley is the name given to a long alleyway in Toronto, just south of Queen Street West, which features a massive collection of vibrant and colourfully painted, unique and detailed murals and street art, in a condensed area. 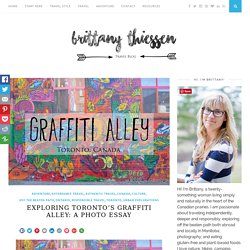 An Off-Season Guide to Montauk, NY - ESCAPE BROOKLYN. The sleepy town of Montauk is 120 miles from New York City, on the easternmost end of Long Island. 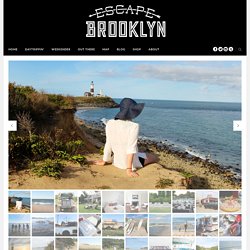 Long hailed as the “anti-Hamptons”, the chichi-ness of the Hamptons is slowly creeping in—but nonetheless, the fishing town still maintains its rough, rustic charm. Affectionally known as “the end of the world,” Montauk is home to more than 5,000 acres of parks and beaches, each with a surprising amount of hiking trails and hidden gems. Though the secret’s out on summer weekends in Montauk, we wanted to create an off-season guide for exploring Montauk during fall, when the water is still warm, the beaches are empty, and visitors can enjoy its longtime establishments and its fishing-town roots.

What Your Coffee Brewing Routine Says About You. Does your morning routine always include a cup of coffee? 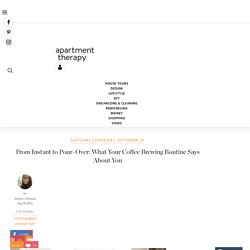 What about a caffeine fix to perk you up during that inevitable mid-afternoon slump? How you brew your coffee says a lot about you, whether you're an instant coffee aficionado or a Keurig connoisseur. Find your preferred brewing method below, and see how you match up... 10 cozy cabins to rent near Toronto. Cabin rentals near Toronto are at their peak of desirability in the fall. 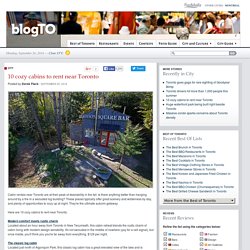 Is there anything better than hanging around by a fire in a secluded log building? These places typically offer great scenery and wilderness by day, and plenty of opportunities to cozy up at night. They're the ultimate autumn getaway. Here are 10 cozy cabins to rent near Toronto. Modern comfort meets rustic charm Located about an hour away from Toronto in New Tecumseth, this cabin retreat blends the rustic charm of cabin living with modern design sensibility. The classic log cabin Located just north of Algonquin Park, this classic log cabin has a great elevated view of the lake and is surround by mature tree stands, which means it's absolutely stunning during the peak of fall colours.

A Scandinavian log home in the woods This Northern Frontenac log cabin is a skier's paradise with slops just a stone's throw away from the front door, but it also shines in fall, when the surrounding hills come alive with colour. Outdoor Cinemas Around the World To Visit This Year. Spoonful of History - Popsicles - Spoonful Magazine. It’s hard to imagine a more charming origin story for the Popsicle: an eleven-year-old California boy named Frank Epperson concocts a drink out of powdered soda and water, and accidentally leaves it outside, complete with a forgotten mixing stick.

In the morning, the contents of the glass were frozen solid, and like any self-respecting eleven-year-old, Frank loosened it from the glass and tasted it, pronouncing it delicious. He called it an “Epsicle,” a blend of icicle, and his own name. Over the years, this story has been told in many versions, reliant on a child’s memory, and likely, a marketing team, but the main points remain fairly constant. In the early 1920s, when Frank was a real estate broker, he was inspired by other frozen novelty treats (like the Eskimo Pie, which was patented in 1922), and began to optimize his invention for the market.

Ontario-made chocolate named best in the world at London competition. Drew and Erica Gilmour’s Hummingbird chocolate shop is located on a suburban street in Almonte, 40 minutes west of Ottawa, in a small nondescript building marked by a sidewalk chalkboard. Their cacao beans are roasted in an oven meant for rotisserie chicken, then stripped from their shells in a homemade winnower, which Mr. Gilmour built with boards from the hardware store and “a lot of duct tape and string.” The five or so employees include their 10-year-old daughter, Hannah. So the Gilmours, who met as foreign-aid workers almost 15 years ago in Afghanistan, didn’t have especially high hopes when they entered six of their handmade dark chocolate bars into London’s Academy of Chocolate awards this winter, along with 580 of their closest friends from such places as Italy and France.

Checking In: The InterContinental New York Barclay. There’s no other city in the world that gets me like New York. Complex, multi-faceted and with a neighbourhood to suit any personality, I’m always eager to jump on a plane back to the concrete jungle and continue exploring one of the few cities in the world I don’t think I could ever get enough of! On this trip I wanted to re-explore midtown, so I checked myself in to the beautiful (and recently renovated) Intercontinental Hotel Barclay for a short but pleasant two-night stay.

InterContinental New York Barclay The hotel is located right in the heart of midtown, a short stroll from popular favourites such as Grand Central Terminal, Times Square, Broadway, the Chrysler Building, Rockefeller Building, 5th Avenue and even not more than a 15 minute walk from Central Park. Thus for first time visitors to New York City, you really couldn’t get a better location. Inside the Room The suites offer a separate living room from the bedroom, with a large couch to cozy up on for those nights in. Top Ten Portland Farmers to Follow on Instagram — PlaceInvaders. We’re not breaking any news here to say, when it comes to food porn, Farmers’ Markets are a hot bed for the spiciest eye candy. Rainbow displays of gorgeous carrots, tomatoes, or berries, baskets on baskets of lettuces and herbs, even a simple pile of radishes; it’s a goddamn motherlode of Instagram gold.

So we find ourselves wondering why more farmers aren’t showing off their goods via Instagram? Many farms have a Facebook presence, many may shoot out a sporadic tweet, but when we sat down to list the best Portland farmers’ Instagrams, we didn’t find quite the bounty we expected. Do You Remember May Basket Day? - Spring Traditions. The future role of a DMO: How Visit Sørlandet in Norway is an international leader in industry development - Destination Think! - Chic Shed Backyard Decorating Ideas - She Shed Ideas. Last year, the "she-shed" emerged as the female answer to the man cave. Bovina, NY - ESCAPE BROOKLYN. ArtVenturist: Roaming Rabbits. Let the rabbits run free, for the sake of Easter. A Private Tasting at Barrie Olive Oil Co. Tiny Houses Vacation Rentals.