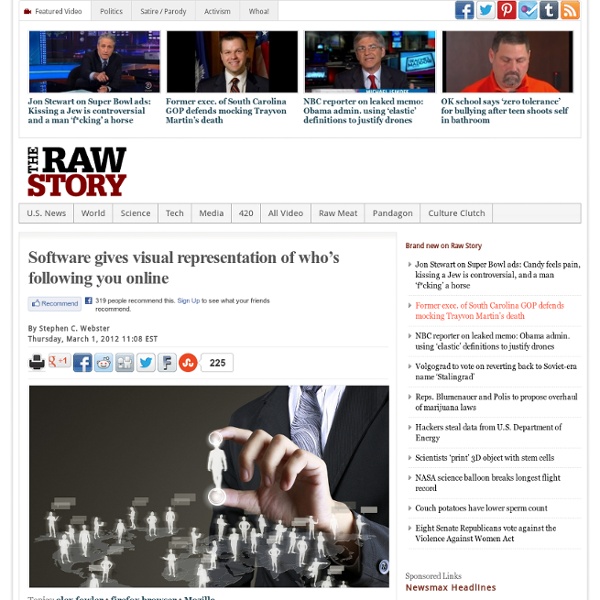 By Stephen C. WebsterThursday, March 1, 2012 11:08 EDT A new piece of software released this week by browser-maker Mozilla does something unique: it provides a real-time visualization of who is tracking your movements online. The software is called “Collusion,” developed last year by Mozilla programmer Atul Varma, who became inspired to code the program after reading extensively about online privacy matters. It plugs into the Firefox browser and watches as websites and ad networks drop “cookies” into the browser during normal surfing. “Each dot in the graph represents a website,” Alex Fowler, the global privacy lead at Mozilla, explained to Raw Story. While it doesn’t sound all that creepy, just wait until you see your own graph. “Mozilla’s goal is to raise awareness of users about one part of their online experience,” Fowler explained. (H/T: PCWorld) Copyright 2012 The Raw Story Stephen C. Stephen C.

Mount USB Devices in Virtualbox with Ubuntu Mounting a USB device inside a virtual machine is often a tool that you cannot go without. If you are using Virtualbox in Ubuntu however, you need to take a few extra steps to make it work. Install Virtualbox A Social-Media Decoder Power shift: Deb Roy, CEO of Bluefin Labs, says social media have changed the relationship between media consumers and producers. From his 24th-floor corner office in midtown Manhattan, the veteran CBS research chief David Poltrack can gaze southward down the Avenue of the Americas, its sidewalks teeming. For more than four decades, it has been his job to measure people’s television habits, preferences, and reactions. In large part, this has meant following the viewing habits of Nielsen panels of TV viewers and parsing the results of network surveys on their opinions. On a late September afternoon, with fall premieres under way, his desk was strewn with color-coded opinions from 3,000 Americans who had wandered into CBS’s Las Vegas research outpost, Television City, at the MGM Grand Hotel and Casino, and agreed to fill out TV surveys for the chance to win a 3-D home entertainment system.

Keyboard Shortcuts In this document Using Shortcuts This document uses the following format for listing shortcuts: Sky apps to go social with Zeebox integration Netflix? What Netflix? Says Sky as it announces a partnership with Zeebox that it hopes will see Sky customers getting social as they watch TV using the Sky mobile apps. The 50+ Best Ways to Curate and Share Your Favorite Social Media and News Content There’s so much information online just begging to be curated: news, social media, images, video, websites… the list goes on. Reading great content from my favorite blogs and websites is one of my favorite down-time activities. It’s also an important part of my job as an IT Director because I need to stay on top of the latest trends, announcements and tech news. How to watch Netflix (Watch Instantly) in Linux With Ubuntu 14.04 and Chrome 37 onwards, playing Netflix on Linux natively is now possible thanks to Encrypted Media Extensions and co-operation between Canonical and Netflix. The instructions below are legacy instructions for running Silverlight on Linux via Wine. However, running Netflix is entirely possible in Ubuntu Linux 12.04 and later releases (and most likely any other modern distribution). See the section below "Running with Wine". Until recently there was no simple solution to watching streaming movies via Netflix (Watch Instantly) in Linux for any Linux distros besides Android based computers.

Social TV Relying on relationships to rebuild TV audiences. Marie-José Montpetit (MIT) Social TV could improve the viewing experience and provide new business opportunities for carriers OTHERS WORKING ON SOCIAL TV BT, London, England ClipSync, San Francisco, CA Intel, Santa Clara, CA Motorola, Schaumburg, IL This article is part of an annual list of what we believe are the 10 most important emerging technologies. See the full list here. Reset Firefox – easily fix most problems This feature is available on Firefox for desktop or laptop computers. If you're having problems with Firefox, refreshing it can help. The refresh feature fixes many issues by restoring Firefox to its default state while saving your essential information like bookmarks, passwords, and open tabs. Important: Since Firefox will revert to its original state, your own configurations and customizations, including extensions, extension data, and about:config preference configurations are removed. If you've made accessibility configurations, you may need to change them back after refreshing.