18 Ways To Travel For Free Or Next To Nothing 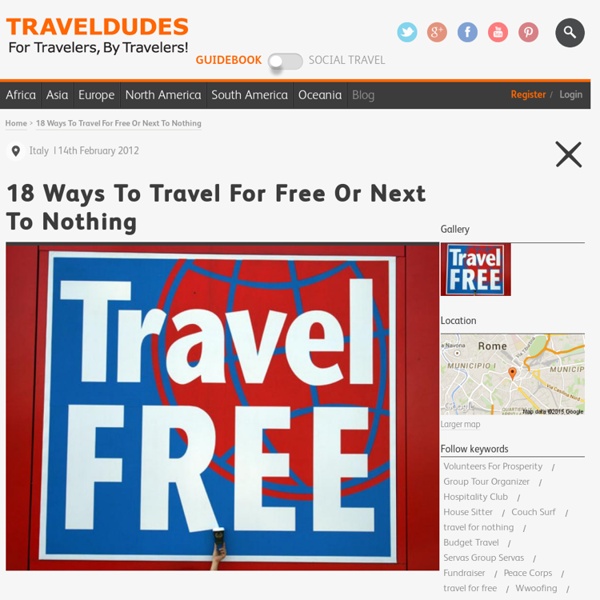 Travel for free or next to nothing? Who’s kidding whom? Is that even possible? We assure you, it’s very much possible. You just have to know how. Join Volunteer Programs There are many volunteer organizations that’ll allow you to travel to the country of your choice and pay you for it, besides. 1. 2. 3. 4. 5. 6. 7. 8. 9. Explore Other Cheap Travel Options 10. 11. 12. 13. 14. 15. 16. 17. 18. EXTRA: Do not forget a good travel insurance before you go We highly recommend to get a good travel insurance as most likely your standard health insurance won’t work abroad. Travel Tip Shared by Teena Celis Adrenalin.com.au

The top 50 restaurants in the Tampa Bay area Years ago I did a call-in radio show about restaurants. Long before the iPhone was a twinkle in Steve Jobs' eye, I would bring a fat stack of index cards to the studio, their corners furled from nervous riffling, the thick paper dimpled with dried sweat. With them, I was armed. "Where can I find the best (insert cuisine or dish here)?" Slick and corporate is the name of the game in this part of town. With impeccable service and a lovely dining room, Roy's has been the elder statesman in this district, with lunches added a couple of years back and newish chef Ryan Leto turning out Roy Yamaguchi's elegant Hawaiian fusion cuisine, nicely showcased in a new winter prix-fixe three-course menu for $36.95 (which includes the molten chocolate cake although sadly not the miso butterfish). •Roy's, 4342 W Boy Scout Blvd., Tampa; (813) 873-7697; roysrestaurant.com • Seasons 52, 204 N West Shore Blvd., Tampa; (813) 286-1152; seasons52.com Cafe Dufrain's executive chef Ferrell Alvarez has big news.

www.businessinsider Living in the Chinese Cosmos: Understanding Religion in Late-Imperial China To understand Chinese theology (literally “discourse about gods”), we need to explore theories about human existence, and before that we need to review some of the basic concepts of Chinese cosmology. What is the Chinese conception of the cosmos? Any simple answer to that question, of course, merely confirms the biases assumed but not articulated by the question -- that there is only one such authentically Chinese view, and that the cosmos as such, present unproblematically to all people, was a coherent topic of discussion in traditional China. Nevertheless, the answer to that question offered by one scholar of China, Joseph Needham, provides a helpful starting point for the analysis. In Needham’s opinion, the dominant strand of ancient Chinese thought is remarkable for the way it contrasts with European ideas. The basic stuff out of which all things are made is called qi. | back to top | Yin and yang are best understood in terms of symbolism. Yinyang and Qi in Human Beings.

Lençóis Maranhenses National Park The Lençóis Maranhenses National Park (Parque Nacional dos Lençóis Maranhenses) is located in Maranhão state, in northeastern Brazil, just east of the Baía de São José, between 02º19’—02º45’ S and 42º44’—43º29’ W. It is an area of low, flat, occasionally flooded land, overlaid with large, discrete sand dunes. It encompasses roughly 1,500 km2 (580 sq mi), and despite abundant rain, supports almost no vegetation. The area was converted into a National Park due to its amazing scenery on June 2, 1981. It was featured in the Brazilian film The House of Sand. Kadhal Anukkal, a song from an Indian film Endhiran starred by Rajnikanth and Aishwarya Rai Bachchan was also shot here.[2][3] Visiting[edit] Located on the eastern coast of the state of Maranhão by the banks of the Preguiças River, the park embraces the municipalities of Humberto de Campos, Primeira Cruz, Santo Amaro do Maranhão and Barreirinhas, the latest serving as the main jumping off point into the protected park. Inhabitants[edit]

Moving and Relocating to Seattle - The Moveline Guide It's unofficial but generally accepted that Seattle was built, much like the eternal cities of Rome and Constantinople, on seven hills. Today, those hills are commonly referred to as West Seattle, First Hill, Denny Hill, Capitol Hill, Beacon Hill, Queen Anne Hill and Magnolia Hill. As you'll see in this neighborhood guide, several of them – particularly Capitol and Queen Anne – play a prominent role in the city's delineation between one neighborhood and another. While Seattle's cost of living is about 16 percent higher than the national average, so is its median family income. Belltown Between Virginia Street and Battery Street, Western Avenue and Fifth Avenue Once a low-rent, semi-industrial district, Belltown has since transformed into a trendy neighborhood with expensive residential buildings, hip boutiques and art galleries, as well as great restaurants and a healthy dose of nightlife. The best of Belltown South Lake Union (SLU) The Best of South Lake Union: Queen Anne Capitol Hill

webmaya.com 1. Tillow: The Beach Towel + Pillow This is the perfect invention for beach bums! When all you want to do is to lie down on the beach and perfect your tan, or go for a quick swim in the ocean after, Tillow allows you to do all that with a peace of mind. Via: Tillow Price: not available 2. Do you know the World Health Organization (WHO) attributes 80% of all travel diseases to contaminated drinking water? Via: SteriPenPrice: from USD49.95 3. When you’re traveling, the last thing you want is for your valuables to go missing, but all too often, keys or a bag will get misplaced. Via: TilePrice: from USD19 4. Why walk when you can skate? Via: Micro Kickboard, Micro MobilityPrice: RM1300 5. Another simple solution for beach lovers. Via: SlotFlopsPrice: from USD24.95 6. Personally, this HoodiePillow Travel is my favorite. Via: HoodiePillowPrice: from USD19.90 7. If you come from an Asian country like me, you will be used to having a water pipe in the loo. Via: HygiennaPrice: USD9.99 8. 9. 10.

Ten Places in South America to Escape the Northern Winter Although it seems as if the whole world is being hammered by icy winds and brutal snowstorms, it is winter only in the Northern Hemisphere. In the Southern Hemisphere, it’s summer, and in South America, there is plenty of warm weather, sun, sandy beaches perfect for snorkeling, surfing and sunbathing and lush, green forests and mountains for hiking and camping. In the mild summer weather of Patagonia in the southern part of the continent, you can zip-line through forest canopies or jet-ski across crystalline, azure lakes. Los Roques Archipelago National Park, Venezuela By far, the most pristine and lesser-known group of islands in the Caribbean, Los Roques (pronounced los RO-kays) is an atoll of 350 beach-fringed islands and cays lying 80 miles north of the coast of Venezuela. Most people travel to Los Roques in organized groups, specifically for fishing or diving trips, but it is possible to travel independently. San Carlos de Bariloche, Argentina Ilha Grande, Angra Dos Reis, Brazil

Off Track Planet Before you render yourself useless by putting on the annual winter fat suit made entirely of holiday hams and snickerdoodles, and cloud your mind with eggnog, and little bottles of schnapps, plan a kick ass trip to start the year off right with our brand new list of destinations for 2013. Sintra, Portugal Homiest No matter how rugged you are, or how well you can hold your ground with the gravity bong, everyone loves little colorful houses and rolling hills. Sintra is a short train ride from the big city action of Lisbon and upon arrival, you get a face full of house. Boracay Best Water Sports So you like water sports and you like 'em cheap and all in one place? OTP Tip: Boracay has this bat cave. Ukraine Like Russia But Better If you've ever wanted to visit mother Russia but pussied out because of the cold or the price tag, Ukraine, the largest country in Europe, is a vodka-drunken happy medium. Cappadocia, Turkey Most Unique Landscape Bhutan Most Spiritual Malmo, Sweden Most Bare-Chested Tasmania

10 Most Beautiful Villages in Europe | Earth Traveling From the Alps to the Mediterranean, these frozen-in-time European villages will make you appreciate the beauty of taking it slow. Reaching some of these European beauties requires extra effort, yet the rewards are dazzling. Your eyes will thank you. Hallstatt, Austria The storybook town of Hallstatt in central Austria enjoys a gorgeous setting on the bank of the Hallstätter See, between the pristine lake and a lush mountain that rises dramatically from the water’s edge. A history of salt mining dating back thousands of years has translated into enduring prosperity for the town, which is most evident in the beautiful square ringed with ivy-covered buildings. Manarola, Italy Manarola is a small town, a frazione of the comune (municipality) of Riomaggiore, in the province of La Spezia, Liguria, northern Italy. Image Source Bibury, England Image Source Colmar, France Image Source Reine, Norway Image Source Pučiśća, Croatia Image Source Telč, Czech Republic Image Source Cong, Ireland Image Source

andrewhy So there is a secret to planning a RTW (round the world) trip that is pretty bold: the only thing holding you back is time. I want to help you make the idea of a round the world trip into a reality. Time is by far the most ‘expensive’ part of a RTW trip. The year or so leading up to planning, and the year of travel. The second part of the secret? You know this. Ok, game on. Lets take a deep breath and remember what travel is about in one picture. So here is your 5 simple steps for doing a RTW trip: Step 1: Where do you dream of going? Cool, now take that list, and go there. Step 2: Time is king. Travel is fun. Step 3: Read the synopsis in guidebooks, then leave them at home. I hate the guidebooks. Step 4: Budget, save and book. If I were to ask you to give me blue colored books next week, and it would save my life, do you think you can find them? You need to save for this trip. Start now. A bit tricky. This is annoying because I have to lie, and I don’t like to lie. Ok, to budget.